The city of Bloomington Illinois still has some of its classic Route 66 attractions: including two Illinois Route 66 Hall of Fame Inductees: Quinn service station and Casey’s Garden Shop.
Other landmarks include the Parkview Pub site, Forrest Park and Miller Park and Zoo.
The tasty Beer Nuts Factory and Company Store, the Historic David Davis Home Museum, some surviving US 66 hotels: the Illinois Hotel and the Phoenix Mid-City Hotel and the Former Evans Gas Station. Don't miss the McLean County Museum of History.

The Main Alignment of Route 66 in Bloomington

The city of Bloomington is the county seat of McLean County in central Illinois. It is next to Normal and their combined population is around 130,000. This is a Map of Bloomington.

Central Illinois' first inhabitants arrived about 11,000 years ago when the glaciers began melting at the end of the last Ice Age. During the historic period, Illinois Native Americans and Kickapoo Indians lived in this region.

French explorers and trappers were the first Europeans to reach Illinois and contact the natives in the early 1600s. They established their posts along the wooded banks of the rivers, avoiding the prairies.

After the U.S. independence, in 1781, Virginia ceded its Northwest Territory to the U.S. government, which organized into a territory. From this vast tract of land, the territory of Illinois was created. Illinois was formed from that territory, becoming a state in 1818.

The first settler in what is now McLean County were John Dawson and John Hendrix in 1822, they were followed by the Funks in Funk's Grove and the Stubblefields in Mount Hope.

The Kickapoo lived here when the first Europeans and Americans settled what would become Bloomington, which was then known as Keg Grove (because the natives had found several kegs of whiskey hidden by the early settlers and taken them to their village).

Then it became Blooming Grove apparently because Mrs. Orendorff said it was a good name because of the blossoms on the maple trees in spring. The post office opened in 1829 with that name. But by 1831 it had changed to Bloomington.

"Blooming Grove" became Bloomington through an act of the Illiniois state Legislature: the one that created McLean county stated that the commissioners that it had appointed would meet and define the location of the county seat, and that "The seat of justice of said conty of McLean, shall be called and known by the name of Bloomington" (25.Dec.1830). So it was named and created before the town was actually founded.

McLean County was named after John McLean who had been a local pioneer lawyer, a territorial judge, the first Representative in Congress from Illinois (1818) and the United States Senator for Illinois(1824-1825).

A promoter of the new county donated 60 acres of land for the town and Bloomington was founded in 1831. But progress was slow as the roads were bad and the plains vast, only after the completion of the Chicago, Alton & St. Louis Railroad through the area in 1853 did population grow and the economy beome stronger.

In 1926 Route 66 was created and it was aligned through Bloomington, in 1941 a "Bypass" was built around the eastern and southern side of the town and it remained as US 66 until 1977 when the highway was decertified.

Bloomington, its Hotels and Motels

> > Book your hotel in Bloomington

More Accommodation near Bloomington on Route 66

Find your hotel room in town, Lodging in Bloomington:

>> See the RV campground in Bloomington

Bloomington has a continental - humid climate with hot summers with little rainfall but high humidity. Its winters are cold.

Bloomington is located in Mc Lean County, which is struck by around 7 tornados per year.

Map of Route 66 through Bloomington, Illinois

See the alignment of US 66 in Bloomington, on our Illinois Route 66 Map, it has the complete alignment across the state with all the towns along it.

These are the color keys for Bloomington:

Pale Blue: marks the Historic Route 66 alignment (1941 -77) Beltline around Normal and Bloomington
Red line or gaps in alignment, is I-55, where it overlaps the old alignment.
Orange line: marks the 1926-40 alignment.
Brown line shows the 1930-40 Route 66.
Black are the sections that are missing.

Below you will find More information on Route 66 in Bloomington.

Sights and Attractions in Bloomington

In his classic book, published in 1946 ("A Guide Book to Highway 66") Jack Rittenhouse gives a town by town description of Route 66 during its heyday, and of course he mentions Bloomington and its twin city, Normal: "... US 66 skirts both towns completely, with a road west to the cities at the mileage point given...".

This tells us that he didn't enter the city, but drove around it using the "Beltway 66". He does provide additional information on lodging and garages listing the following: "... stores; Wannemacher's garage and Cherry St. Garage)... Hotels here include the Illinois, Rogers, Hamilton, Tilden Hall, Phoenix, Commercial...". He adds that it was the town where the Republican Party was created in 1856.

Finally he mentions that Normal and Bloomington are "virtually one community... city limits adjoining along one side".

As is usually the case with Route 66's large cities, where change is the norm and urban renovation during the 70s razed many vintage buildings, all the classic motels have gone, none of the old gas stations on the Beltway survive, and only a few isolated places remain (for now) from US 66's golden days. Below is a descriptiion of a drive through Bloomington from South to North:

It is a 5.7 mile drive to see the main attractions in town. Use this Map with directions.

Begin at I-55's Exit 157B on the southwest side of town, or if you are driving the Historic Route 66, at its junction with the South Veteran's Parkway. Take a left along S. Morris Ave. To your left, on the next block, seems to be what was a Route 66 Motel: 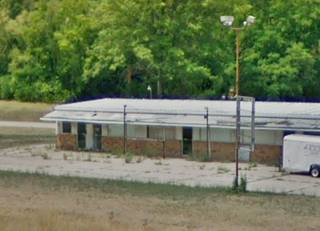 Was this a motel? Bloomington, Il. Click for street view

It seems to be a motel with a rectangular shape, a now empty sign points towards South Morris.

Drive north into town, to your right is Forrest Park.

At one time in the early 1920s it was a tourist camp. The early US 66 travelers woud picnic here and even camp out. Now it is a sedate city park with plenty of oaks and hickory trees (Street view).

Ahead, to your left just past Folsom St. is the site of a now (or perhaps, "for now") vanished classic restaurant:

Named so because it faces Miller Park. The pub was located on the 1930-40 alignement of Route 66 it has been here since 1928 making it the oldest restaurant in town to remain on the same site. It is also known as Parkview Inn and suffered a serious fire in 2016 and what survived was demolished and a new and bigger building will replace the old one. See street view.

To your left, facing the former pub. With its 1906 pavilion, a lake and war memorials plus a train (steam engine, caboose and coal car) from the Nickel Plate Railroad - New York, Chicago, & St. Louis Railroad Company that operated through Bloomington.

Ahead, on both corners at W. Wood St. are two garages, which may have been gas stations, especially the one on the left (NW corner); see this street view of both auto service shops.

Keep northbound for two blocks and turn right along W. McArthur, you are driving through a residential area. Route 66 ran one block to the north (W Oakland St. but it has a westerly course so you must use McArthur); 0.8 mi. aheaed is South Main Street. Turn left along it, this was the northbound Route 66 through Bloomington.

Turn right along East Front St. and where it ends on N. Robinson St. is the Beer Nuts Factory:

In 1937, Edward Shirk acquired the local Caramel Crisp confectionery store and made their glazed peanuts into a hit when he renamed them "Beer Nuts" in 1953. Buy souvenirs and nuts at their 1973 plant. More at their website beernuts.com.

A few blocks away is a Historic Mansion: 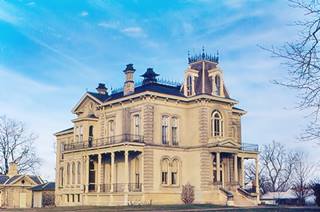 A Victorian mansion built in 1872 was the home of David Davis (1815-1886), a U.S. Supreme Court Justice appointed by Abraham Lincoln, who was his friend and who had ridden the circuits with him.

Turn back west along E. Washington St. and head into downtown Bloomington again. At Main is the County Museum:

It is located in the old County Courthouse (1903). Don't miss the must stop at site for Route 66 fans: 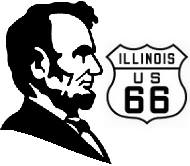 "Cruisin’ with Lincoln on 66" Visitor Center

This is Illinois and Route 66 goes hand in hand with Abraham Lincoln. The Visitor Center is on the Museum's first floor

Park and walk, on the corner of W. Jefferson is one of the hotels mentioned by Rittenouse: The Illinois Hotel:

Designed by R.T. Newberry in Neo-Classical style to replace the old Windsor Hotel that had burned down. It became the Illinois Hotel with 180 rooms, restaurant and all the ammenities. A sixth floor was added in 1925. The hotel became the Ilinois House in 1961 and in 1972 became a residential and commecial building. Below is a "Then and Now" image sequence.

Turn back and walk north half a block along Main Street to the former Phoenix Hotel, also mentioned by Rittenhouse:

Dates back to 1902 and served as a hotel until 1965. Gaye Beck, its owner expanded her florl business and then in 2016 converted the fromer 44-room hotel into apartments. See its Street view.

Ahead, turn right and on the next corner is Lucca Grill:

Strategically located on the corner of E Market and N East St. (US 51), it opened in 1936, and still makes thin-crust pizza. Enjoy its decorated tin ceilings and the mahogany bar.

Hop back into your car and continue northwards. On Locust Street a former Gas station:

Now Penelope's is a store selling second hand women's clothes, but it is very likely that this building on the SW corner of E Locust and N Main streets was the garage and gas station built by Thomas Evans for Clarence Irwin and Tim Hayes. It has a 1930s Streamline Moderne look with the rounded office design:

Keep going, and on the next corner is a Classic Gas Station:

The former Quinn Shell Station is now closed, but it belonged to the Quinn's for over 70 years. It finally closed in 2013 when Elmo Quinn retired.

It began in 1941 as a Texaco, with the modern style designed by Walter Dorwin Teague (a streamlined box). Later it became a Shell, and now even though closed, you can still stop and take a peek.

At one time it was a market where Route 66 travelers stoped for food, since 1949 it has catered to the locals and the travelers.

This marks the end of your drive through Bloomington, now head north and drive into the twin city of Normal.

The Mother Road was created in 1926 and it entered Bloomington from the north, from Normal along N. Center Street, which it followed all the way through town until it reached the southern side at what is now South Veterans Pkwy, where it turned west towards Shirley. It is shown in Orange line in the map above. 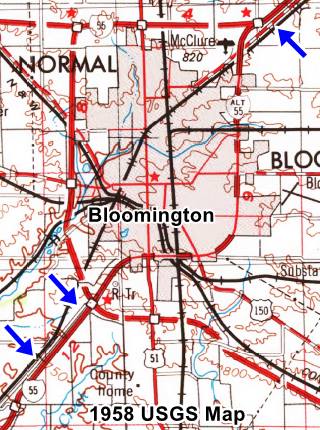 Brown line marks its way across the town, which heads north along Main Street.

The Pale Blue line marks the Historic Route 66 alignment (1941 -77) or "Beltline" around Normal and Bloomington, to the west and south of the urban sprawl.


Shirley to Normal through Bloomington

Drive north from Shirley to Normal (8.8 miles) following this map with directions.

> > See the next segment Shirley to Funks (west)