McLean is a small town with a Hall of Fame site: the renown truck stop, the Dixie Travel Plaza. Don't miss its 1980s America's Playable Arcade Museum or the McLean Depot Train Shop next to the McLean silhouette and sign.

All you wanted to know about McLean Illinois

McLean is a village located on Route 66 in southwestern McLean County, Illinois; see a Map of McLean.

There are Two McLean's on Route 66

The two McLeans: This one in Illinois and the other other one in Texas: McLean TX

Central Illinois was first inhabited some 11,000 years ago when the glaciers retreated north at the end of the last Ice Age. During more recent times, the Illinois people, who were Native Americans lived here on the plains and were the first to meet the French explorers in the 1600s.

The French were the first Europeans to reach this area, some were trappers others explorers or missionaries. The first settlers chose the wooded areas and the rivers as the plains were inhospitable.

After Virginia ceded the Northwest Territory to the U.S. Federal government in 1781, it was organized into a territory. Illinois was formed from that territory, becoming a state in 1818.

The first settler in what is now McLean County were John Dawson and John Hendrix in 1822, they were followed by the Funks in Funk's Grove and Stubblefields in Mount Hope in 1824.

Mount Hope township with Mt. Hope was established in 1836, west of the future McLean, but it was unsuccessful.

McLean County was created in 1830 and named after John McLean who had been a local pioneer lawyer, a territorial judge, the first Representative in Congress from Illinois (1818) and the United States Senator for Illinois(1824-1825).

McLean is the Anglicized form of the Sottish Gaelic name Mac Gille Eathain, which means "servant of (Saint) John".

Progress was slow as the roads were bad and the plains vast, only after the completion of the Chicago, Alton & St. Louis Railroad through eastern Mount Hope in 1853 led to the creation of the station and village of McLean.

Franklin Price from Pennsylvania founded the town in 1855 and by 1866 it had its first grain elevator and incorporated as a village.

Named for the county where it is located.

Route 66 was created in 1926 and aligned through the town along its main street, late it shifted a few blocks further east and crossed the town until it was decertified in 1977.

> > Book your hotel nearby in Atlanta

More Accommodation near McLean on Route 66

Book your hotel in McLean

Mc Lean is in Mc Lean County, which gets hit by some 7 tornados each year.

Map of Route 66 through McLean, Illinois

See the alignment of US 66 in McLean on our Illinois Route 66 Map, it has the complete alignment across the state with all the towns along it.

These are the color keys for McLean:

Pale Blue: marks the Historic Route 66 alignment (1926 -77) through McLean
Gaps in alignment, is I-55, where it overlaps the old alignment.
Orange: the 1926 realigment along Main Street McLean
Black: missing segments.

Below you will find More information on Route 66 in McLean.

Attractions on Route 66 in McLean

Jack Rittenhouse published his "A Guide Book to Highway 66" in 1946 after driving the whole of Route 66. He has an entry for McLean in which he wrote: "... Van Ness Garage. Another small community, but it provides gas station and cafe".

Little has changed since then.

A Drive through McLean

Enter the town from the north along Historic Route 66. There were two alignments through town, one along its eastern side the other along Main Street.

Both meet in the central part of the town. Here you can take a short side trip (3 blocks NW) along Center St. crossing the tracks to the main square to visit a Unusual Museum:

This is an 80s-style pinball and video arcade with fully functional arcade game machines, right from the 1980s. A museum and a place where you can actuall play! Open Friday evenings and all day Saturday.

Return to Route 66 head south and two blocks ahead, sandwiched between Historic Route 66 (which here meets U.S. 136) and the freeway is the Dixie Truck Stop:

This is the oldest truck stop in the state. It began in 1928, just two years after Route 66 was created.

John Geske and his father in-law J.P. Walters opened the Dixie Truck stop in a garage on the south side of Route 66. Soon it became a restaurant, they added cabins and even a cattle pen to it. Truckers and travelers were attracted by its family feeling and its great food.

Ot only closed for one day between 1928 and 2003 -because a fire burned the restaurant in 1965. They moved it to a cabin and rebuilt an even larger restaurant.

It was a family run operation until it hit bad times in 2003 and was sold to a corporation.

It is Pictured above, this is a Street view.

Turn west along U.S. 136 & Historic Route 66 and on the next corner, to your right are two attractions: 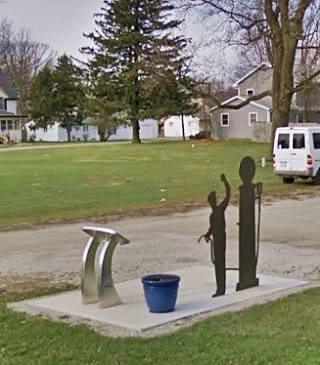 The silhouette of a man with a 1940s gas pump represents the old Dixie Truck Stop. Read the sign to learn more about Route 66 in McLean.

Right behind it, is the Old McLean Depot:

This is the original railway depot that stood in central McLean on the old GM&O, Alton Route tracks. It is also one of only two stations still standing in Illinois that witnessed the 1865 funeral train that carried President Lincoln's coffin back to Springfield for burial.

It has been restored and is now a hobby shp selling all sorts of model railway kits.

Your tour through McLean ends here, take a right along US 66 and head south towards Atlanta.

Route 66 ran through McLean since it was created. The original 1926 alignment (in Orange in the map above) ran along N Fischer and Main Streets. A later 1930s alignment (Pale Blue) took the road around its eastern and southern flanks.

From McLean to Atlanta

Drive the 5 miles to Atlanta using Historic Route 66, heading south from McLean. The road runs along the former southbound lanes of the four-lane divided highway that US 66 was during the 1940s. The former northbound lanes are beneath I-55 southbound lanes.

> > See the next segment Atlanta to Lawndale (west)