The small village of Funk’s Grove is best known for its maple "sirup" found at Funks Grove Pure Maple Sirup produced from the sugar maples growing in the Sugar Grove Nature Center; there is also the old Walker General Store, and two Railroad Depots.

Funk’s Grove or Funks Grove is a small unincorporated community in McLean County, central Illinois. ; This is a Map of Funk’s Grove.

The prairies of Central Illinois were the land of the Illini (Illinois) Native Americans when the first French explorers reached the area in the 1600s.

The first pioneers arrived after the 1812 War with England but they settled along river banks as the distances and difficulties to enclose the land in the prairies hampered any attempt to farm them.

The first settlers were two brothers, Isaac and Absalom Funk, who arrived here in 1824. Robert and Dorothy Funk Stubblefield arrived shortly after.

Mount Hope township with Mt. Hope was established in 1836, west of the future Funk’s Grove, but it was unsuccessful.

McLean County was created in 1830 and named after John McLean, a pioneer lawyer, territorial judge, first Representative in Congress from Illinois and United States Senator for Illinois.

The forest grove in the area was very suitable for the settlers, and once the railroad (Chicago, Alton & St. Louis R.R.) reached the area in 1853, farming took off.

Funk comes from Middle High German "vunke" which means "spark" and was used as a nickname for a blacksmith.

When Route 66 was created in 1926 it passed near the town (across the railroad tracks from it) and remained so until it was decertified in 1977.

Hotels and Motels near Funk’s Grove

> > Book your hotel nearby in Bloomington

More Accommodation near FunksGrove on Route 66

Find your room close by, in Bloomington:

Snow falls each year between November and late March, and averages 22 inches (55 cm).

Funks Grove is located in Mc Lean County, which is struck by around 7 tornados per year.

See the alignment of US 66 in Funks Grove, on our Illinois Route 66 Map, it has the complete alignment across the state with all the towns along it.

Below you will find More information on Route 66 in Funks Grove.

Getting to Funk’s Grove

Drive along Historic Route 66 into Funk’s Grove or use the freeway I-55 (and exit north in Shirley or south in McLean). US 136 runs just south of McLean.

Attractions on Route 66 in Funk’s Grove

In his work, published in 1946 ("A Guide Book to Highway 66") Jack Rittenhouse described US 66 during its heyday, he mentioned the small hamlet as follows: "Funk's Grove... gas station; cafe; no tourist accommodations... The town itself lies across the railroad tracks which parallel US 66".

From the north turn right at Funks Road, cross the tracks and enter Funks Grove. To your left is the old store:

Originally a grocery store and also a gas station, it closed in the late 1970s. This is surely the one mentioned by Rittenhouse.

The train depot located across from the old General Store was originally from Shirley. By the way the old Funks Grove depot is at the Maple Sirup Store.

Head west and then south (it is a short 2 mile drive - see this map with directions).

Opened in 2004. With four dedicated nature preserves, and 5 miles of trails, you can trek the different habitats: riverine, forest and prairie. Live animals, exhibits and displays complete the experience.

The Grand Prairie of Illinois has small islands or patches of land with forest groves. These were places where the trees managed to survive the prairie fires and gain a foothold against the grasses.

Funks Grove is the largest remaining intact prairie grove in the state of Illinois and covers more than 1,000 acres of which 443 have been designated a National Natural Landmark. It is located on Timber Creek, a tributary of Sugar Creek whose water flows into the Illinois River.

The area was a white oak, bur oak and sugar maple tree forest. And the local Illinois Indians made maple syrup and maple sugar from the maple trees.

View of the Forest at Funks Grove, Illinois

Turn back to US 66 and at the corner is the "Sirup sign" (shown below). Turn left and head south or some sirup: 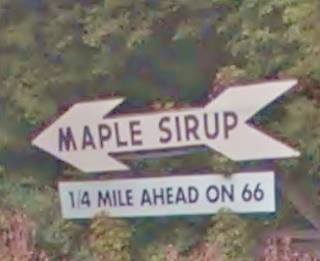 Still run by the Funk family, who have been making sirup since 1891. They spell it "Sirup" with an "i" instead of a "y", which is correct, and is used to distinguish genuine sugar maple sirup from the regular sugar-based syrup.

It is sold on a seaonal basies (stocks run out quickly!) at the gift shop with Route 66 collectibles.

Sirup is harvested from mid-February to mid-March which is the period that the sap flows. Sales begin in March and end when the supply is depleted around August.

Route 66 was aligned parallel to the railroad tracks since its creation back in 1926. Later during the 1940s it was improved by the addition of a second set of lanes, the now removed nortbound lanes (you can see their bridge abutements on Timber Creek, but the bridge and the paving is gone).

Further north and south these lanes are buried under I-55's southbound lanes and all that remains as Historic Route 66 are the former southbound ones.

Funks Grove is the midway point of Route 66 in Illinois

There is a sign that marks the midway point, reminiscent of the one marking the midpoint of the whole route in Adrian Texas.

From Funk’s Grove to McLean

It is a short 4.7 mile drive to McLean along Historic Route 66, heading south from Funk’s Grove (map with directions).

> > See the next segment McLean to Atlanta (west)