Lexington has quite a few Route 66 attractions apart from its famous Memory Lane:
The Oasis Drive In sign, the Lexington Neon Arrow Sign; the former Lexington Motel a Route 66 Marker and Kelly’s On 66 (former Mesa Cafe) and the Anderson’s Corner old gas station.

The Alignment of Route 66 in Lexington

Lexington is a town located on Route 66 in McLean County, Illinois. Map of Lexington.

Although it has been inhabited for more than ten thousand years, Central Illinois was inhabited by Kickapoo Indians when the first French trappers and explorers reached the area in the 1600s.

The region became a U.S. territory and it became part of the US as the state of Illinois in 1818.

The first settlers were John and Margaret Patton in 1829, they had eleven children. He built the first grain mill in the region. His cabin has been restored and is now placed in the Lexington pool park and pavilion.

McLean County was created in 1830 and named for a local pioneer lawyer, John McLean who had served as territorial judge, the first Representative in Congress from Illinois and the US Senator for Illinois.

The town was platted in 1836 by Asahel Gridley and James Brown during the mid-1830s town founding boom. As it predated the railroad (which reached the area in 1854) it has north-south and east-west aligned streets with a central square, and was located where the woods met the prairies.

One of the town's founders, Brown was born in Lexington, Kentucky and his hometown was named in honor of the first great battle of the Revolutionary War, the battle of Lexington, Massachusetts.

the Massachussetts town may have been named after the English peer Lord Lexington, an English peer or after the town of of Lexington (nowadays spelled Laxton) in Nottinghamshire, UK. whose name recorded as "Laxintone" in 1086 AD may derive from the Anglo-Saxon word "Leaxingtun" which means "farmstead of the people of a man called Leaxa".

In the 1850s, Jacob Spawr built his home there, and Abraham Lincoln lodged there frequently. The Chicago and Alton Railroad reached the town in 1854 bringing prosperity.

President Teddy Roosevelt visited Lexington in 1902, giving a speech at the train depot. The "Pontiac Trail" from Chicago to St. Louis passed through the town as a more or less decent road for cars in the early 1910s and it was paved in the early 1920s as State Highway 4. This would be the road along which Route 66 would be aligned when it was created in 1926.

> > Book your hotel nearby in Chenoa

More Accommodation near Lexington on Route 66

Find your hotel nearby, in Chenoa

>> See the RV campground in neighboring Normal and Bloomington

Lexington has a continental - humid climate with hot summers with little rainfall but high humidity. Its winters are cold.

Lexington is located in McLean county which experiences some 7 tornados per year.

Reach the town using Historic Route 66 or via I-55 and Exit 178, US 24 passes through Chenoa, north of Lexington.

Map of Route 66 through Lexington, Illinois

See the alignment of US 66 in Lexington, on our Illinois Route 66 Map, it has the complete alignment across the state with all the towns along it.

Pale Blue: marks the Historic Route 66 alignment (1940s -77),
Gaps in alignment, is I-55, where it overlaps the old alignment.
Orange line: marks the 1926-40s roadbed.
Black are the sections that are missing.

Below you will find More information on Route 66 in Lexington.

Sights and Route 66 Landmarks in Lexington

In 1946 Jack DeVere Rittenhouse drove from Chicago to Los Angeles along Route 66 and published his classic "A Guide Book to Highway 66". He mentions the town of Lexington as follows: "small business district with gas stations, etc., garage but no hotel". He adds "The new freeway by skirting these smaller towns is affecting the portion of their income formerly received from tourists", this freeway wasn't I-55 but the four-lane divided highway that Route 66 became after the early 1940s.

Below is a description of Lexington, from south (coming from Towanda), to north, heading towards Chenoa. 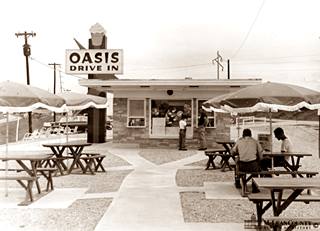 Oasis Drive-In was a classic in Lexington, it operated from 1960 to 1976 when it closed. The original sign is still there, rusting away (compare the black and white photo with the current view below). Don't miss the very 60's Googie style car park canopy with a space age touch to it.

S. Grove Street, just behind the Drive-In was the original 1926 to 1940s alignment of Route 66 into Lexington.

Oasis Drive In in Lexington, Illinois

Drive north along the main highway and just ahead at West Main Street are several attractions:

To your left, across Route 66, on the NW corner of W Main St.

The sign was erected in the late 1940s and it pointed along Main Street into town, which was east of the bypass "freeway". Its purpose was to attract travelers into the central business district of Lexington.

Neon Arrow Sign has been restored and placed in its original position, an icon from the good old "neon era" on Route 66.

Originally erected in the late 1940’s on Route 66, the arrow pointed the way east to the central business district of Lexington. The sign has recently been restored and is in the original location. It is reminiscent of the neon era on the road.

Now, look right, from south to north: on Morris Street is the former Lexington Motel:

The Lexington Motel with its "18 Good Clean Units All Morern Air Conditioned Televsion..." opened in 1950 on the junction of Main and Route 66. The postcard below mentions Carl Christianson as its owner. At one time there was a Mobile gas station next to it, Gleeson's, facing Main. I-55 brought a drastic reduction in travelers along old US66 so the gas station was demolished and the motel was converted into apartments.

On the park that separates Morris St. from Route 66 is a Marker:

The marker (you can see the brown marker in the image above, to the right) was erected by the Illinois History Club of Lexington High School and the Illinois State Historical Society. It reads:

"In 1926, construction began on a 2,448-mile highway from Chicago to Santa Monica, California. Route 66 reflected the increased use of motorized vehicles. The road, which cut diagonally across Illinois, passed through Lexington. Sleek restaurants, service stations and motels were built specifically to accommodate travelers. The original two-lane, concrete highway - a section of which is located here - was replaced over a span of thirty years by the more modern interstate highway system. In Illinois, Interstate-55 closely parallels old Route 66". 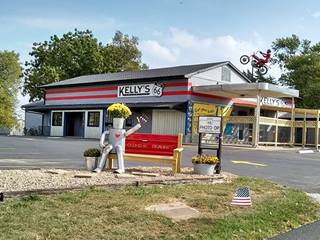 Across Main, on its north side was the "Mesa Café" it was built in the 1940s on the brand new four-lane Route 66. It also had a Skelly brand gas station.

It closed in 1970 when I-55 killed traffic through Lexington. In 1982 it was bought by J. Risberg who turned it into the "Filling Station Restaurant", which closed in 2011.

It reopened as a refurbished eating spot: "Kelly's on 66", now run by Kelly Tobin.

The typical ice-box shape of a 1930s gas station with the two door garage clearly visible and the office too. Now repurposed as a repair shop:

The original Route 66 alignment from 1926 to the 1940s winds around the town northwards along Grover St. (we describe it below). The last section of the alignment (Parade Road) is now the famous Memory Lane:

Turn west along Main and retrace your steps back to Route 66 and take a right along it, heading north, just 1 mile away (see map with directions) to your right is the northern tip of Memory Lane.

This stretch of road roughly one-mile long is the original 1926 roadbed that was used until the four-lane divided higway was built just west of it, to skirt Lexington.

It has been restored and has some vintage billboards of motels (and the funny "Burma Shave" slogan signs found on US 66 until the early 60's, check this website for more Burma Shave Jingles).

Walk it all year round or ride a bike along it. Cars only drive along Memory Lane during festivals.

This ends your drive through Lexington. Turn around and visit the commercial district on Main Street or head north to visit Pontiac. 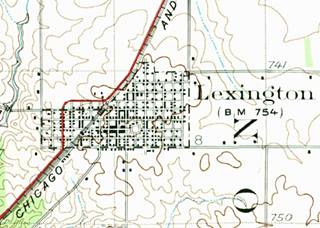 The first alignment of Route 66 in Lexington followed that of state highway 4. Which had been paved a couple of years earlier. It had, like all roads of those days, a winding course with many 90° curves and it also passed through the downtown district of most towns.

It is shown in the map above with an Orange line and as the red line in the 1926 USGS Map of Lexington.

It's northern point in Lexington is at Memory Lane's northern end, and then it heads down Parade Rd., curving west along W Wall St and then southwards along N and S Grover St. South of town, just at the former Oasis Drive-in, it meets the later alignment of Route 66, built over the older one.

It is shown in Pale Blue in the map above.

The southbound lanes, constructed directly over the older roadbed in 1944-5 and the northbound lanes were completed in 1954-55, together creating a four-lane highway with a center median.

The present Historic Route 66 has retained the original northbound lanes because the southbound are now abandoned or, further south and north, buried under I-55.

South of town is the 1946 Mackinaw Bridge on the west side of the modern US 66, on the former southbound lanes.

From Lexington to Towanda

It is a 7.7 mile drive to Towanda, and this is the Map with directions.

> > See the next segment Towanda to Normal (west)