The city of Atlanta is located on Route 66 in central Illinois with a historic wooden grain elevator, the J. H. Hawes Grain Elevator, the iconic 19-foot tall Muffler Man Holding Hot Dog, a historic building with the Palms Grill Café, it also has Murals in Atlanta and the Atlanta Public Library with its clock tower.

All you wanted to know about Atlanta Illinois

Atlanta is a town located on Route 66 in Logan County, Illinois; see a Map of Atlanta.

Humans have been living in central Illinois since the end of the last Ice Age some elven thousand years ago. Later the Illinois Native Americans lived on the plains.

The French were the first Europeans to explore the area in the mid 1600s. Settlement took place in the nineteenth century along river valleys and forested areas. The grasslands were settled once the railroad arrived, as it allowed farmers to settle and ship out their produce.

Logan county was established in 1839 and in 1853 the Chicago, Alton & St. Louis railroad reached the area and the town was founded and named "Xenia", the name was chosen by the settlers who came from Xenia in Ohio.

As there already was a Xenia in Ilinois, one of the proprietors, a Mr. R. Gill suggested naming it after Atlanta in Georgia, a town he had recently visited.

The Atlanta in Georgia was named after its railroad depot "Atlantica - Pacifica" which was very quickly shortened to "Atlanta".

Route 66 was created in 1926 and aligned through the town, it remained so until its decertification in 1977.

> > Book your hotel in Atlanta

More Accommodation near Atlanta on Route 66

Find a room in town, hotels in Atlanta

Logan County is struck by some 7 tornados each year (Atlanta is located in Logan County).

Map of Route 66 through Atlanta, Illinois

Check out Atlanta on our Illinois Route 66 Map, with the complete alignment and all the towns along it.

These are the color keys for Atlanta:


Pale Blue: marks the Historic Route 66 alignment (1947-77) through Atlanta
Gaps in alignment, is I-55, where it overlaps the old alignment.
Orange: the 1926-1947 aligment in Atlanta, and the original one in Lincoln, Elkhart and Springfield.
Black: missing segments.

Route 66 besides being an Historic highway, has also been designated as a National Scenic Byway and an All-American Road in the state of Illinois.

Below you will find More information on Route 66 in Atlanta.

Drive along Historic Route 66 into Atlanta or use the freeway I-55 (exit 140). US 136 runs to the north of Atlanta, through McLean. 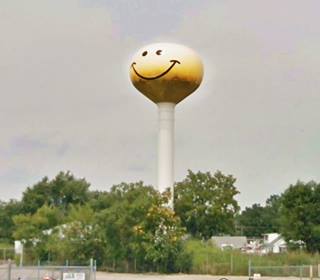 In his "A Guide Book to Highway 66" (published in 1946), Jack Rittenhouse mentions Atlanta: "...garage; gas; cafes; no cabins or hotel... US 66 goes down one of the main business streets, past some very old store buildings, some dating back to the 1850's".

A Drive through Atlanta

Begin your drive through town at its southern side, where SW Arch Street meets Historic Route 66, see this Map with directions, it is a short 1.9 mile drive to tour Atlanta.

To your left, is the "Smiley Water Tower", greeting visitors with a smile. It is pictured above.

Continue north, ahead, to your right on the northeast corner of Race St. and SW Arch Street is a Mural, facing Race, it is pictured at the top of this page.

To your left, on the southwest corner of Race is the Historic Public Library: 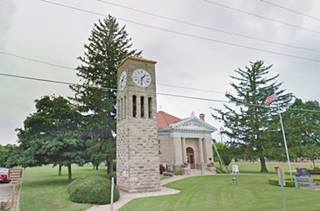 The octogonal library was built in 1908 and the 36-foot clock tower was built the following year. It has remained in open since then.

The Seth Thomas 8 day clock used to be in the Atlanta High School but was later moved to the library. It is an "8 day" clock because it has to be hand-wound every eight days. There is a group of volunteers "Keepers of the Clock" who do this job. The tower has a 1,200 pound brass bell that chimes on the hour.

Turn left along Race St. and cross the tracks just ahead turn on 1st St. to the left, you wil see the red structure of the Historic Grain Elevator:

This Grain Elevator operated from 1904 to 1976. It is a museum nowadays and it gives you a clear idea on how things worked in the past: Grain was dumped in a pit and then moved up into storage bins by means of a system of belts and pulleys powerd by a single cylinder engine. The grain was then moved out to rail cars.

It is Illinois' only fully wooden grain elevator. It has an outdoor, self-guided interpretive tour.

Retrace your steps back to Route 66 an turn north. Here in one block are two iconic Route 66 sights: The Hot Dog Muffler Man and The Palm Caf´:

This is a 19 foot tall unique Muffler Man, holding a hot dog (a giant hot dog). Also known as Paul Bunyon (yes, Bunyon with an "o" and not Bunyan with an "a"), it came to Atlanta from Cicero Illinois:
(learn more about the Original site of the Muffler Man Holding Hot Dog).

Muffler Men are gigantic (18 to 25 feet tall -5.5 to 7.5 m) statues moulded in fiberglass and polyester resin used in the U.S. as eyecatcher advertising along roads and streets.

The first Muffler Man was a "Paul Bunyan" figure created for the Paul Bunyan Cafe on Route 66 in Flagstaff circa 1960; later it became the Lumberjack Café and now is Granny's Closet and it still stands nearby (See a street view of the Lumberjack today).

The mold was used to make many more Paul Bunyans mostly placed in front of gas stations and garages with some holding auto tires and mufflers instead of axes, and that gave them the name of "Muffler Men".

There are several on Route 66, for instance the Chicken Boy in Los Angeles (a Paul Bunyan with a Chicken's head!), and the Lauterbatch Muffler Man in Springfield, Illinois, or the Gemini Giant in Willmington, Illinois. 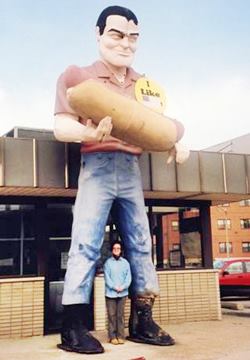 Atlanta's Muffler Man was originally installed at the Bunyon's hotdog stand in Cicero, Illinois (see image). This stand was owned by Hamlet Stephens and he deliberately spelled its name "Bunyon" to avoid copyright issues.

His "Paul Bunyon" held a gigantic hotdog in his hands. See its picture below.

In 2002 the stand closed and in 2003 the Bunyon Giant was moved to Atlanta. Stephens died in 2012 but his work lives on, to amaze those driving along Route 66.

Bunayn is part of America's folklore, he was a giant lumberjack with herculean strength and accompanied by his loyal "Babe"n the Blue Ox.

The loggers in the North American forests created the myth and the oral tradition was put down in paper and made popular in 1916 by author William B. Laughead (1882-1958).

Learn more about the other Muffler Men on Route 66

Across the street is a historical building and a classic restaurant:

This historic building is one of those "very old store buildings" mentioned by Rittenhouse in 1926.

Alexander Downey a local businessman built it in brick in 1867, because he had lost a wood building during a fire in town.

It has an Italian-style design with arched windows on both of its stories, and that gave Arch Street its name.

It had two separate commercial areas, one was a bank and later the Bevan law firm until 1960 and then the local paper was published here until a fire closed the building in 1973. it was donated by the Bevan's to the Atlanta Library and Museum.

The other half was a hardware shop, gricery and eventuall a restaurant, the Palms Grill.

Adams had lived in California and that is why he named it "Palms". He added a neon sigh speling out "Palms Café" (still there)

"Club Parties" were held here during the 1930s and 40s. The town's teens worked as waiters here during the 1950s but, it closed in the 1960s. Empty for years, this north side of the building was later donated by the Hawkins family to the local museum.

The building was listed in the National Register of Historic Places in 2004 which got the funding so that it could be rehabilitated.

Its exhibits cover not only Atlanta's history but also Abraham Lincoln and Route 66. Open during tourist season: Monday through Saturday 9 a.m. to 4:00 p.m.

Park, and walk along the sidewalks of this red-brick commercial district and enjoy the other murals.

End of your city tour. Head out of town by driving north along SW Arch St. heading towards McLean.

In 1926, the original Route 66 was aligned through Atlanta's downtown commercial district in a course roughly parallel to the railroad, using a pre-existing Illinois state highway.

This is shown in Orange in the map above and was the road that Rittenhouse drove along in 1946.

In 1947 it was moved to the east, and a second set of lanes were added to the highway (this alignment is marked in Pale Blue in the map). When I-55 was built in the late 1950s its southbound lanes replaced the northbound lanes of the former US 66four-lane divided highway so nowadays only a 2-lane Historic Route 66 remains.

From Atlanta to Lawndale

> > See the next segment Lawndale to Lincoln (west)