Geary, has many historic sites: its Historic Public Water Trough and its Museum, housed in the 1903 Gillespie Building which are listed as historical sites. The Bridgeport Hill Service Station on the original alignment of route 66 (listed historical sites) with the Canadian River Bridge, the longest bridge on Route 66. Enjoy its local wines at the Winery.

Geary is a town set upon the county line and spans both Blaine and Canadian counties in Central Oklahoma.

What is now Gleary, has been inhabited for more than 10,000 years. The Native American population that peopled the area in the mid 1800s however, was settled there by the U.S. government:

The Cheyenne lived near the Great Lakes in Minnesota and moved towards the Great Plains in the 1700s. The Arapaho lived in Montana, Wyoming, South Dakota and Canada. Both nations met in the plains and formed an alliance whose territory ranged from Texas to Montana. Despite signing a treaty with the U.S. government (1868) which guaranteed the integrity of their traditional lands, European settlers intruded on their territory. This caused conflict and war; a second treaty (1867) promised the Arapaho a Reservation in Kansas, but they opted to move with the Cheyenne to a reservation next to Fort Reno.

But then the US Congress organized the Oklahoma Territory from land formerly ceded to Indian Nations. One of its counties, was County "C", which later became Blaine Co. It was "reserved" from 1890 until 1892, when it was opened to settlement during the "Cheyenne-Arapaho Opening" in April 1892.

Geary is located on land that was the homestead of Shubell and William Huff, father and son, who sold part of it to a Townsite company. Its original location was half a mile northwest of its current site but it was moved to be close to the tracks of the Choctaw, Oklahoma and Gulf Railroad that was advancing west from El Reno.

The post office opened in October 1892 and adopted the name of Geary.

The French surname "Le Guerrier" means "The Warrior". And the town's name is that of a scout and guide of the Old West, Edmund Gasseau Choteau Le Guerrier (1840 - 1921). He survived the Sand Creek Massacre of 1864.

He was a mixed-blood French and Cheyenne and acted as an interpreter for the U.S. government during the wars between the Cheyenne and the US. He later owned a ranch 3 miles northeast of what is now Geary, which adopted his name but with an easire pronounciation. 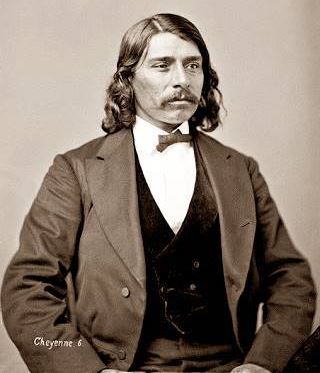 3.5 million acres of land were opened for settlement by the U.S. government on April 19, 1892. The settlers flocked to the Oklahoma Territory to claim their 160-acre homestead plot. This land had belonged to the Arapaho-Cheyenne Reservation which had been reposessed by the US Government after distributing 160-acre plots among the tribe members and buying back the rest.

By the end of the "opening", almost 80% of the land remained unclaimed, and by 1892 only 7,600 people had settled there. The area at that time was going through a terrible drought (1885-1896) and crops failed giving the farmers a very bad time. Furthermore there were no railways to get the produce to the markets.

The town was formally established on May 3, 1898, when the Choctaw Railroad (later the Chicago, Rock Island, and Pacific Railroad) built a line from Oklahoma City.

It was, and still is, a rural community based on farming. The original alignment of Route 66 only passed through it between 1926 and 1932, when it was shortened and aligned further south, bypassing both Calumet and Bridgeport.

Book your hotel in nearby El Reno

Lodging Near Geary along Route 66

>> There are RV campgrounds close to Geary.

There are about 88 wet days every year. Thunderstorms take place during spring and summer, and provoke hail and tornadoes.

Map of Route 66 through Geary Oklahoma

See the alignment of US 66 in Geary, on our Oklahoma Route 66 Map, it has the complete alignment across the state with all the towns along it.

Route 66's alignment in Oklahoma: the Historic Route 66 through Geary

Read below for more information on Route 66's alignment in Geary.

Geary is a tiny town set next to the original 1926 alignment of Route 66: visit its historic water trough, the Gillespie Bank (1903) which houses the Museum, and taste its local wines. Further afield are Jesse Chisholm's burial site and the Historic Canadian River Bridge of Old Route 66, which here has a 19.5 mile original roadbed segment.

See the Rock Island caboose (across the road), the area's first log jail used until 1909 and themed rooms with historic artifacts.

It is housed in the historic Gillsepie Building.

The Building was built in 1903 by G. F. Gillespie as the Bank of Commerce, later known as the American State Bank. It failed during the Great Depression in the 1930s. But it still stands. See the image further up, which displays its brick facade.

On Jct. of Main, Canadian and Northeast Blvd., Geary, OK.

A trough (pronounced trof) is a long shallow container from which animals eat or drink. Geary has a historic public trough.

This historic trough and well served the horses of visitors and locals between 1901 and 1939, after which horse-drawn vehicles declined. A team of two horses could be watered without having to be unharnessed from the wagon.

The concrete trough measured 40 by 89 inches. The first trough was a wooden one, fed by a windmill and pump (replaced in 1903).

You can see it and its location here Street View

A full range of wines, but they specialize in dry wines. Enjoy tasting them in their tasting room in downtown Geary.

Visit, to the east, the nearby towns of Calumet, El Reno, and to the west, Bridgeport.

Jesse Chisholm was a trader, guide, interpreter and explorer who lived the last 40 years of his life in Indian Territory. He died and was buried next to Left Hand Spring on March 4, 1868. There is a granite marker at the site.

He built many trading posts and a trail from Kansas City to Red River, Texas used to drive cattle overland in the days after the American Civil War.

Head south to drive along the original alignment of route 66 and visit the Historic Canadian River Bridge:

The longest bridge on Route 66.

The longest truss bridge in Oklahoma and of the whole Route 66, built in 1933. 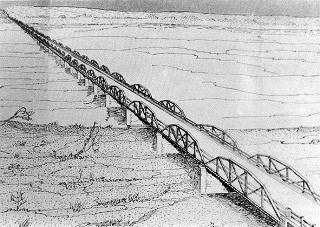 It spans the South Canadian River in Caddo County and was built in 1933 on the upgraded alignment of Route 66 (now US 281).

Its official name is "William H. Murray Bridge", but locals know it as the "Pony" bridge. William Henry Davis "Alfalfa Bill" Murray (1869 - 1956). Was the first Speaker of the Oklahoma House of Representatives after statehood, as U.S. Representative, and the ninth Governor of Oklahoma (1931-1935).

It consists of 38 pony truss sections, each 100 feet long. "Pony" refers to how the trafic is located in relation to the structure, in a pony bridge traffic flows between the parallel trusses which are not braced at the top. (the trusses are the steel structures that support the bridge on either side of the roadway.

The trusses are "Camelback" design, a name which is due to the shape of the truss whic it curves with a slight arch-shape. Strong and light.

It was finally opened to traffic in 1934 due to delays in the Bridgeport section of US 66.

The west end of the Canadian River Bridge appeared in the 1940 movie "Grapes of Wrath", in the scene where "Grandpa" died and was buried.

This building is a house with a canopy over the pumps' sector. It was buit in 1934 by Leroy Tilley who placed it on the newly upgraded section of Route 66 that bypassed Geary and Calumet, the "El Reno Cutoff". Tilroy later added a service bay.

The Old alignment of Route 66 near Geary

For those keen on seeking out the old original roadbed of Route 66, these are some tips for the Geary segment:

The 1926 Road from Geary to Bridgeport

Route 66 reached Geary coming from Calumet (heading west) along 150th St. NW (US 270). It grazed the southern part of town, taking a southwards turn along Broadway (left) following it for three blocks. At the time, US 281 did not exist, so it followed the unnamed road that nowadays splits to the right with a SW course next to the railroad tracks.

Of course, the weary travelers drove north into Geary to fill up their tanks, eat or rest.

The road south of Geary was built by Oklahoma State Highway Commission between 1925 and 1926, and that year it became part of US Hwy. 66, and remaind so until 1933 when the "El Reno Cutoff" bypassed it.

At the junction, Route 66 took a left and headed straight south along the Ozark Trail which had been built in this section in 1917 by the town of Geary and had been improved in 1925-1926 by Oklahoma State Highway Commission, it remained unpaved.

The road continued south next to Lumpmouth Creek and took a right, westwards along E1000 Rd. towards Bridgeport, this was the alignment of US 66 from 1926 to 1933, it was also the 1918 Postal Route (Ozark Trail). Just before the Railway Bridge over the South Canadian River, Route 66 turned left (south) and crossed the river over a private Toll Bridge, and entered Bridgeport along road that is not accessible from the north (the bridge is gone).

However this road can be reached from Bridgeport: it is on the north side of Lonewolf Ave. between Main and 5th St. it has a north to south alignment and ends in a dead-end short of the remains of the 1921 Toll-bridge.

See the Map of this 1926 original segment.

The El Reno to Bridgeport Alignment

At the junction with US 270 the 1926 segment turned right and headed north through Calumet and then west through Geary to return back south via Bridgeport (see the detailed description of this Calumet - Geary alignment). 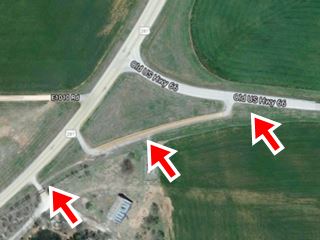 Satellite view of the "relict" road.

After 1932, a new paved alignment was drawn to shorten the road and upgrade it bypassing Calumet and Geary: it headed west (modern E1020 Rd.). It was originally paved in 1931-32 in Portland Concrete and was known as "El Reno Cutoff".

It then followed US281 Bus. Spur (with a NW alignment after the Cherokee Trading Post. and took a left (passing in front of the Bridgeport Hill Service Station), heading west along old Old Hwy 66 (Paved in 1932) until it reached modern US 281 and turned left with a SW alignment towards the Historic Canadian River Bridge.

Here, is the eastern terminus of the intact 1931-34 alignment of Route 66, described below.

One of the longest intact segments of Route 66 in western Oklahoma: 19.5 miles long.

This segment begins just west of the South Canadian River bridge (described above), and heads west all the way to Hydro. It was paved in Portland Concrete in 1931, 33 and 34. It is the current alignment of OK-66. East of Bridgeport are two bridges built in 1934. The road, bypasses Bridgeport along its southern side and keeps west towards Hydro where it ends 0.5 mi. east of Exit 84 of I-40 near Weatherford.

Some patches of aspahlt have resurfaced it west of Canadian River, but the rest is unaltered. It has the original integral curbs and drains to help discharge rain water.

It remained operational until 1962 when I-40 replaced it. It also did away with the private toll bridge just north of Bridgeport on the 1926-1932 alignment of Route 66.

The lake has a surface of 100 acres and almost 7 miles of shoreline. It is a place chosen by fishermen and hunters, there are picnic tables and water.

Visit the 80 feet high red canyon walls: rappelling is one activity, as well as fishing, hicking, rock climbing and swimming. The park was a stop along the Historic California Trail of the 1800s pioneers.