Edmond, , its best sights are the Armory, which houses the Museum, the First School in Oklahoma, from 1889 and several historic buildings (Citizen's Bank, North Tower), and even an original 1895 farmhouse and a blue hippo, and its Liberty Fest on 4th of July. Follow the 1926 - 1954 alignment of Route 66 through Edmond

The area around Edmond has been inhabited for over ten thousand years, as proven by the nearby site at Luther, which dates back to 9,000 BP. The current Native Americans in Oklahoma were relocated there from their original territories in the eastern USA by the American government. The policy at the time was to resettle the natives west of the Mississippi River in the "Indian Territory". Later, in tle late 1880s, pressure to settle the area with European settlers led to a change in policy: the Oklahoma Territory was carved out of the Indian Territory (1890), and surplus land was acquired from the tribes to "open" it for settlement.

The land was settled by means of "Land Runs", where the future homesteaders rushed in to stake out and occupy their lot on a given day and time. It was a race to grab the land and it worked admiraly well.

In the meantime, in 1884, the Southern Kansas Railway Co. was granted permission to build a line from Arkansas City KS into Oklahoma, to Texas, with a North to South course. A team of surveyors along the route stopped at "Mile Marker 103" in 1886 and noted its "good spring", which was a crucial source of water for the steam engines. By late 1886 a station was built there and a water well was dug. The railway officials named the place Edmond on March 28, 1887, and four months later the government approved it.

But the railroad would have to wait until the "Oklahoma Land Run" of 1889 to have a town to serve.

The town appeared in one single event, the "Run" on April 22, 1889, and the settlers chose the land near the station. The tracks (now BNSF) still pass through the town.

Many streets were named after Railway Men or those of the Seminole Town and Development Co., who platted it. One year later its population was 394.

The territorial legislature created the "normal" school in Edmond in 1890, which later became the University of Central Oklahoma. Its first building, the "Old North Tower" opened in 1893 and is a historical site. The University is one of the towns largest employers.

In 1911, the interurban railroad linked it to the state capital.

Farming was the original economic base of the community and when Route 66 was aligned through the town in 1926, it brought a growing flow of travelers and prosperity until realigned in 1954 after the completion of two modern expressways on the northeastern part of Oklahoma City.

Oil was discovered in the 1930s and 40s (West Edmond Field), and during the 1950s and 60s the town began to grow as a suburb of neighboring Oklahoma City.

The Post Office Massacre took place in Edmond on August 20, 1986. Patrick sherrill, a former postman killed 14 people and wounded six before committing suicide. It was the worst ever postal employee murder-suicide event in the US. (there were others). There is a memorial to the victims in front of the Post Office.

Edmond is the home town of Shannon Miller, who is America's most decorated Olympic gymnast with a total of 7 medals. She won 5 during the 1992 Summer Olympics and the other 2 at the 1996 Summer Olympics.

I-35 was named "the Shannon Miller Parkway" in her honour between Memorial Rd. and the Logan - Oklahoma county Line

Book your hotel in Edmond

>> Book your Hotels in Edmond

Lodging Near Edmond along Route 66

Book your room in Edmond

>> There are many RV campgrounds in Edmond.

Summers in the central part of Oklahoma are hot and humid. Winters are relatively mild (but snowstorms can happen) and the other seasons are subject to frequent variations. North winds prevail in winter and during summer those from the south and southeast.

Snow: around 7.9 inches fall every year (20.1 cm), mostly between December and March.

The average yearly rainfall is around 36.5 in. (928 mm). And Edmond has some 84 rainy days per year. Most rain falls during summer.

Storms (thunderstorms) are common in spring and also summer; some may come with hail and strong winds, and also tornadoes. Tornadoes can hit at any time.

Edmond is next to Oklahoma City, whose metro area is one of the most tornado-prone ones in the whole world: about 150 tornados have struk this area since 1890. Some of them were very strong (F5 on the Fujita scale, which is the maximum value).

Edmond is located in the "Tornado Alley and experiences approximately 10 Tornado watches every year.

Map of Route 66 through Edmond Oklahoma

Check out Edmond on our Oklahoma Route 66 Map, with the complete alignment and all the towns along it.

Route 66's alignment in Oklahoma: the Historic Route 66 through Edmond

Read below for more information on Route 66's alignment in Edmond.

Edmond is well known for the blue hippo, the first shoolhouse in Oklahoma (1889), its 1895 farmhouse. Enjoy its Liberty Fest on July 4th, the armory with its museum and its Y-chapel of song.

The Edmond Sun which opened on July 18, 1889, is the state's oldest continuous newspaper dating from Oklahoma Territorial days.[12]

Historic buildings in the town of Edmond

There are several buildings listed in the National Register of Historic Places in Edmond, below we describe some of them.

This is the first public shoolhouse in the Oklahoma Territory opened in August 1889.

See the photo above. It was the last surviving 1889 original structure in Edmond. and the earliest one-room schoolhouse in the State. The School open the first two Saturdays of the month from March to November. 1 PM - 4 PM. Admission is free.

The ecological region where Edmond is located is known as "The Cross Timbers", it is a woodland that is a vast "natural hedge" beyond which lie the open prairies. The forest was between 5 and 35 miles wide and was a formidale obstacle for the first explorers: the closely knit trees with tough wood blocked the carts and horse riders.

American author Washington Irving used the expression "Cross Timbers" to define them when he explored the area with the Ellsworth expedition in 1832.

Head west from the shchool and turn right on Broadway. On the northeast corner, at Main is the Citizens' State Bank: 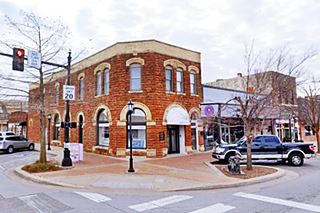 The building is a typical example of a sandstone construction in the Oklahoma Territory in 1901.

It had a "burglary proof and fireproof" vault.

Head east and then south along S. Boulevard and you will reach the Armory which houses the museum:

It has exhibitions with over 30,000 artifacts and photographs that span the full history of Edmond: prehistory, settlement during the 1889 Run and more

It is located in the former Armory, a historic site built in 1936. 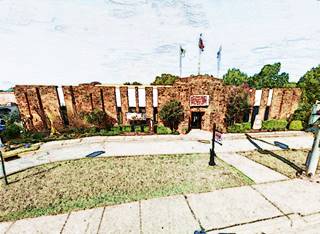 The Edmond Armory, A. Whittall

A solid, massive and sturdy building constructed in local red sandstone between 1936 and 37. The Works in Progress Administration (WPA) employed local unemployed labor to boost the economy during the Great Depression.

It was the quarters of the Oklahoma National Guard, 179th Infantry Unit of the 45th Infantry Division.

In 1983 it became part of the Edmond Historical Society and Museum. Notice its resemblance to the Chandler Armory, built by WPA at that time.

One block west, in the same park (Stephenson Park) is the:

Built during the Great Depression in local red sandstone by the WPA project that generated work for the unemployed.

Now head towards the Campus of the University of Central Oklahoma or UCO, in its neighborhood you can visit:

This building was constructed in 1892 to house the "normal" school that had been created and funded by the Territorial legislature.

It has a sober and imposing style, a very classic building. (see its location and Street View).

Built in 1948; it was almost entirely designed and built by the students, faculty, staff, and friends of the University. Its The stained glass windows reflect the scripture "I am the vine, Ye are the branches."

Head west of UCO, along Wayne and turn on N. Jackson to visit the Kivlehen House: 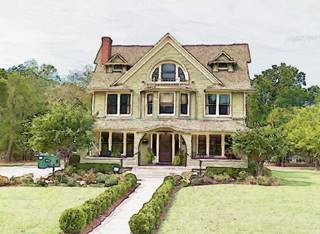 The Kivlehen House, A. Whittall

The other sites are located out of town, but are worth a visit: 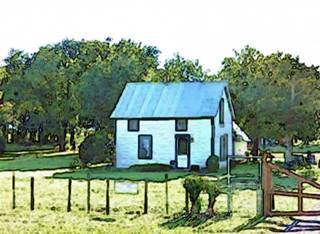 The Cartmill family built it and lived here for over 50 years, and built it. The cylindrical sheet metal granary west of the house was built in 1910. It is the kind of home built by settlers as they moved out of the more primitive Sod Houses.

The Blue Hippo or "Buddy" a fiberglass kitsch art statue is famous. You can see it at 1129 S Broadway (see its Street View).

Events and Fun in Edmond

There are several events and activities to enjoy in Edmond:

This is a week-long celebration during Fourth of July which takes place every year and attracts 125,000 visitors.

It has been chosen as one of the top 10 places to be in America on July 4th by CNN and USA Today.

The event includes: the largest parade in the state, car show, concert in the park, kite fest, fireworks, Scholarship Pageant, Road Rally and a Rodeo.

For nature lovers, the Arcadia Lake Eagle Watch (January), during which you can spot the bald eagles at the lake. Bring warm clothes and binoculars. At the park office there is plenty of information and helpful staff to get you on track for viewing the eagles.

The market is located in the downtown Festival Market Place and you can buy locally grown produce during summer.

From that point westwards until Fink Park (2.8 mi.), the brick paving predated Route 66, as it had been laid in 1924. At that time the roadbed was part of the state highways OK-7 and OK-4.

From the Park and through Edmond all the way to Oklahoma City, the road had been paved in 1925 with local municipal funding.

The 1926 alignment took a left along Broadway (later US 77) towards Oklahoma City, and left it at Memorial Rd. to head south along Kelley all the way to Grand Blvd. (now I-44).

In Agust 1954 both highways US 66 and US 77 were moved from their alignment along Broadway and 2nd Street, to the new I-35 (known in those days as Sooner Road.) where US 77 continued northbound and US 66 eastwards.

From I-35 and 2nd St., towards the south, both highways went along I-35 and met the brand-new Northeast Expressway next to the entrance to Turner Turnpike (modern Exchange 138). In those days there was no Killpatrick Turnpike running east to west.

The 1954 route 66 kept south with both I-44 and I-35 in a southwesterly direction until reaching Grand Boulevard (Now I-44) where it turned right, towards the wes, and meeting Kelley, where it linked up with the old 1926 alignment again.

From Kelley and Grand Blvd. it kept west along it until reaching Beverly Dr. (in those days it was named Lincoln Blvd.), where it turned left heading south into the Oklahoma City, towards the State Capitol building.

To the southeast of Edmond, along Route 66.

An ideal place for camping, picnicking and enjoying the lake: swimming, oating and fishing. There are trails for hiking and an eagle watch in January.

Campsites and RV hookups are available. More details at the Lake Edmond website.

History of the Y Chapel of Song, UCO.