Conway is a small town on Historic U.S. 66 famous for its "Bug Farm" (VW beetles buried nose down in the ground) and for the Preserved segment of U.S. 66, listed in the National Register of Historic Places.

Conway is located in the south of Carson County, in the central region of the Texas Panhandle.

There are Two Conway's on Route 66

The one in Texas and another in southern Missouri: Conway MO

The Panhandle region was peopled by hunter-gatherers over 10,000 years ago. Their Clovis stone tools have been found in nearby New Mexico, and belong to some of the first humans to reach America. 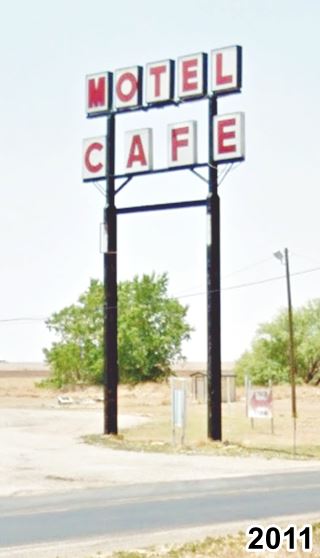 Until the Spanish introduced Old World horses to America, the local Comanche and Kiowa Indians hunted buffalo and deer on foot. Later they learned to ride and were masters of the plains until well after the independence of Texas and its annexation by the U.S.

Between 1874 and 1875 a war raged between the natives and the U.S. Army which led to the defeat of the Indians and their confinement in reservations. The grasslands were opened to the pioneers.

The first County in the region was Bexar (1876), from which Carson County with seat in Panhandle (8 mi. north of Conway) was organized in 1888 and named after Texas Secretary of State Samuel P. Carson

The first building to go up in what would become Conway was a Lone Star School, built in 1892 for the children of homesteaders and ranchers. It was followed by a post office (1903) and the Chicago, Rock Island and Gulf Railway (also 1903).

In 1905, J. D. Delzell and P. H. Fisher founded the town which they named Conway, after H. B. Conway, who had been a Carson County commissioner.

A church was built in 1912 and the community slowly grew, its economy rooted in cattle and farming.

Population grew until the late 1960s, and then began to fall. The post office closed in 1976 and the railway terminated its operations in 1980. I-40 bypassed the town and business moved out. Current population is estimated at around 20.

Where to Stay in Conway

>> Book your Hotels in Amarillo and Shamrock

What is the Weather in Conway?

Snow does fall in Conway and this can happen at any time between September and May (although the first flakes fall on the first week of December). The high altitude causes greater snowfall than locations further to the east: 18” per year on average (with peaks of over 40”) between 43 and 102 cm.

Tornadoes, this is Tornado Alley, read more: Tornadoes on Route 66.

Check out Conway on our Route 66 Map of Texas, with the complete alignment and all the towns along it.

You can always check out our Route 66 Map of Texas, with the complete alignment and all the towns, including Conway. In that map, the color key valid for Conway only is the following:


Pale Blue: Historic Route 66 alignment;
Blue: Original alignment of US 66 between Amarillo and Conway. In Black are road sections that are now buried under the freeway or the airport.

Map with the alignment of Route 66 through Conway

Route 66's alignment in Texas: the Historic Route 66 through Conway

Below you will find full details on Old Route 66 in Conway.

Tiny town famous for its "Bug Farm" and the Historical segment of U.S. 66, listed in the National Register of Historic Places.

The town of Conway consists of a few homes scattered along U.S. Highway 66 at the point where westbound TX 207 (Route 66) meets northbound County Road N. At the intersection, TX 207 turns north and crosses I-40 at Exit 96. FM 2161 keeps a westward alignment, as U.S. Highway 66.

The corridor where the railway once ran is on the south side of the highway. The tracks have been removed.

Ride north along TX 207 and take a left at the south frontage road of I-40 to visit the Bug Ranch:

This attraction is free of charge and is known as the Bug Farm, Buggy Ranch and Bug Ranch

View of the "Buggy Ranch" or Bug Ranch

Since 1967 the Crutchfields have operated a service station and souvenir shop on the south frontage road of I-40 at its crossing with TX 207 in Conway.

But business took a turn for the worse when a Love's Travel Stop (a truck stop) opened on the other side of I-40: most of the potential customers went there.

So the Crutchfields decided to create an attraction on the south side of the Interstate and found inspiration in the Cadillac Ranch (west of Amarillo): they parodied it by burying five Volkswagen Beetles (Bugs) nose down in the ground.

Below is a view of the Cadillac Ranch:

View of the "Caddy Ranch" or Cadillac Ranch

Visitors came but business did not improve and the Crutchfields moved on. The visitors paint the cars with spray paint just like they do at the Cadillac Ranch.

For those keen on geocaching, it is a geocache.

Hare It Is - Henry's Rabbit Ranch

There is another Route 66 attraction with cars buried nose-down in it: it is Henry’s Rabbit Ranch, in Staunton Illinois on the 1930-1940 alignment of US66 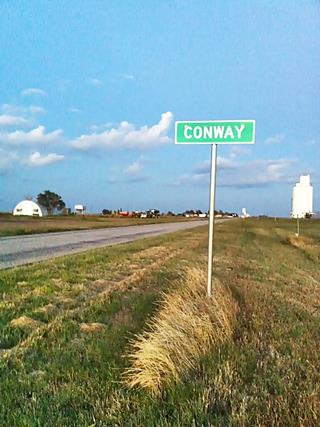 Historic segment of US Highway 66

The seven mile portion of Texas Farm to Market Road 2161 between Conway (TX 207) in the east and I-40's exit 89 was listed in the National Register of Historic Places in 2007.

This segment of US Highway 66 was chosen for protection because it is the best preserved and also one of the longest sections of untouched US Highway 66 in the State of Texas.

This is a Map with Directions.

Driving along this two lane road is like traveling back in time: it is the open range of the Texas Panhandle. Windmills pumping fresh water for the cattle, farmland dotted with the occasional windmill, grasslands and a few dirt county roads intersecting Route 66.

This is exactly the scenery that greeted travelers of the 1930s, 40s, 50s and 60s: dirt roads, farms and fences enclosing the prairie.

For those interested in driving the Old Route 66, above we describe the historic Route 66 alignment. 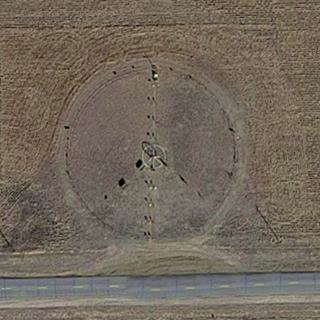 The Peace Farm is shaped like the CND sign 200 ft. in diameter (60 m). The CND symbol was an anti-nuclear logo created during the 1950s British campaign for nuclear disarmament. It combines the flag-signals (used in the navy) for letters N and D (initials of Nuclear Disarmament). It became very popular during the 1960s and 70s.

The monument consists on many metal objects, signs and markers with peace proclaiming texts cut into them. It is the work of a local farmer, Richard D. Baker.

To the east of Conway just before Groom, is another small town: Lark. 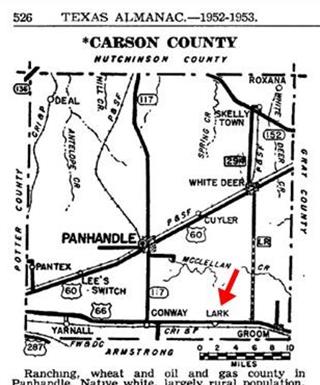 Map of Carson Co. 1952-53. Lark is on the bottom right part of the map. Univ. of North Texas Libraries

Located in the south or Carson County. The Chicago, Rock Island and Gulf Railway built a siding here in 1903 and named it after Lark Stangler, who was a local rancher

And, to the east of Groom, is the infamous «Jericho Gap», a sector of the 1930s highway that was unpaved and became a quagmire when wet.

From Conway to Amarillo, TX

Below we detail the road from Conway to Amarillo. The next section after Amarillo reaches Glenrio:

Along Route 66: Conway to Amarillo

Or book your Hotel in neighboring Shamrock or Amarillo

This segment of US 66 was listed in the National Register of Historic Places in 2007.

At this point there are two alternative routes to reach Amarillo:

Marked by the Blue line in the map above.

The original alignment of US hwy 66 kept straight west but the airport was built and the road no longer exists. You have to detour around the airport.

Going around the Airport: take the following course to meet US 66 on the western side of the airport: Go along B Avenue northwards until it meets BL-40 ⁄ US 60 - E. Amarillo Blvd. (19.2 mi.) and take a right, westwards onto it.

Triangle continues west after N. Lakeside Drive ⁄ TX 335 (23.1 mi.) but to cross the highway you must first go north to E. Amarillo Blvd by taking a right, then take a left to cross the overpass, and another left to go along the west side of TX 335 back to Triangle Dr.

At Triangle, take a right and keep westbound until meeting Amarillo Blvd. again (23.9 mi.). Here is an old Route 66 motel: Just along the Boulevard, next to the intersection, on the right is Historic Triangle Motel (see image below).

2. Keep on the main roads

At the crossing, take a right entering BL-40 and head northwest till you reach US 60 -E. Amarillo Blvd. (16.4 miles). Turn left with BL-40 towards Amarillo. Cross (22.2 miles) TX-335 and slow down to see Triangle Motel on the left side of the road just before it intersects Triangle Dr. (22.6 miles).

Keep on straight along Amarillo Blvd till you reach Pierce St. (US 87) in the center of the city (27.3 miles) of Amarillo.