The town of Chenoa has retained few Route 66 sights, but don't miss these attractions: the Historic Matthew T. Scott Home, the Chenoa Pharmacy from the 1800s and the classic Selz Royal Blue Shoes Mural. And don't forget to enjoy the Cayuga to Chenoa Historic section of US 66.

The Alignment of Route 66 in Chenoa

Chenoa is a town in Central Illinois, in northern McLean County; see this Map of Chenoa.

Illinois was first peopled when the ice sheets retreated some 11,000 years ago. More recently, during the historic period when French explorers reached Illinois in the 1600s, they encounterd Kickapoo natives.

The region passed from France to Britan and after the American independence it became a part of the U.S. Which was organized as a territory and later (1818) admitted as the state of Illinois.

The first settlers chose the rivers and not the prairies, so the land remained in the hands of the natives until the Kickapoo Indians were removed in 1832 by the US government to Missouri. Eventually they'd end up in Kansas.

McLean County was established in 1830. It was named after John McLean a pioneer lawyer, territorial judge, Representative in Congress from Illinois and then US Senator for Illinois.

The first pioneer was Eli Myer who settled in the forest north of Chenoa in 1850.

The Chicago & Alton Railroad laid its tracks through the area in 1854, and it was known simply as "Peoria Junction" during its first days as a railroad depot, it was named "Chenowa" (with a "W") by M. T. Scott who had purchased the land knowing the tracks would pass through them.

Scott, a native Kentuckian chose "Chenowa" because it was the Indian name for Kentucky, meaning "dark and bloody ground". However the government office removed the "W" and named the post office "Chenoa". And despite Scott's protests, it remained so until this day.

The township was created in 1858 and soon, mainly due to Scott's efforts, became a flourishing farming community. State Higway 4 was built through Chenoa in the 1910s, following the "Pontiac Trail" which was supposedly a decent road that linked Chicago with St. Louis. When Route 66 was created in 1926 its first alignment followed State Hwy. 4.

> > Book your hotel in Chenoa

Find your hotel in Chenoa

The climate in Chenoa is a "Humid Continental" one, so it has very humid and hot summers and cold winters.

Snowfall is 26 inches (66 cm) each year and falls from Nov to the first days of Apr.

Chenoa's area is hit by about 7 tornados per year.

How to get to Chenoa?

Get to Chenoa driving along Historic Route 66 or use Exit 187 on I-55. US 24 passes right through Chenoa.

Map of Route 66 through Chenoa, Illinois

See the alignment of US 66 in Chenoa, on our Illinois Route 66 Map, it has the complete alignment across the state with all the towns along it.

The Route 66 segment from Cayuga to Chenoa is listed in the National Register of Historic Places, we describe it below.

Below you will find More information on Route 66 in Chenoa.

Sights and Route 66 Landmarks in Chenoa

What to see in Chenoa

US 66 in Chenoa: historic context

Jack DeVere Rittenhouse drove from Chicago to Los Angeles in 1946 and wrote his "A Guide Book to Highway 66" describing his itinerary. In it he also mentions Chenoa.

Rittenhouse wrote: "...Burch & Downe's garage; several cafes and gas stations; few cabins... Town is a few hundred yards (Left) off US 66. Junction here with US 24. Pike Hotel in Chenoa". It is clear by his description that he drove down the new 1940's bypass alignment.

Not much has survived from the 1930s or 40s in Chenoa, the old Route 66 are mostly gone, torn down or removed. Below is a tour through Chenoa using Route 66, from south to north:

Drive US 66 through Chenoa 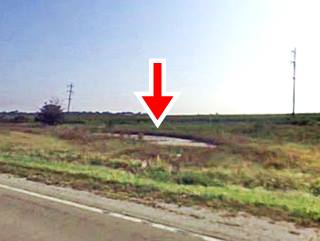 Start your drive south of town, where the freeway curves away to the northwest. Here, just after passing County Rd.3000 N, to your right you wil see the remains of the original 1926 alignment, now abandoned and mostly covered with dirt:

In case you are interested, the now gone Graham and Bennion Elevator also known as the Ballard Grain Elevator was located 2.2 miles south of this point on the SE side of the road, located in what used to be Ballard, 4 miles from Chenoa on the southeast side of the old road. It was demolished in 2006 (this is the Map showing where it was.

The Red arrow marks the original paving. It disappears under the field north of this point but it resurfaces again next to US 24 in downtown Chenoa.

Continue along the former four-lane divided highway that was built between 1943 and 1954. You can see the abandoned second set of lanes to your left, (west).

Ahead is the junction with U.S. higway 24, mentioned by Rittenhouse. This was an important spot, but none of the US 66 buildings have survived.

Looking south along Route 66 at its junction with US 24 in Chenoa, Illinois

In the image above, you can see the now abandoned lanes of the four-lane 1950s Route 66 to the right.

Built in 1948 on the northeast corner of the junction, where the Chenoa Family Restaurant now stands. It was owned by Isaac Weaver and had 8 units. A second building with another 8 units was added by Ray Anderson in 1950. It changed hands several times, and was torn down.

Turn right and drive east into Chenoa, just 0.3 mi ahead, before crossing the railroad, look south (right) and you will see the old 1926 alignment's remains, here at South Morehead St. and US 24. This is a Street View, we have marked this vanished segment in Black in the map above.

Here, on the NE side of the road was the now gone Steve's Café

Cross the tracks and turn left along Green St. into the business district of Chenoa.

This hotel mentioned by Rittenhouse was here, but it has been torn down it had 35 rooms and in 1936, belonged to Marie Dahl who rented rooms for prices ranging from 75 cents to $2. Back in 1916 its slogan had been "Three meals, room with bath, For two dollars and a half".

Ahead, after crossing Lincoln Street, to your left is the Selz Royal Blue Shoes Mural:

The company that advertised with these mural sings was Selz, Schwab & Co.:

Morris Selz migrated from Württemberg, Germany to Chicago in 1854. He joined Cohn and made clothes but in 1871 he began selling shoes wholesale, founding his M. Selz & Co. he soon grew and built a factory selling around one million dollars a year of shoes and boots. Charles Schwab joined as a partner in 1878.

The company had 1,500 employees producing 12,000 pairs a day in the early 1900s and several factories near Chicago.

The Crash of 1929 and the Great Depression hurt sales and the company went bankrupt shortly after.

The Selz Royal Blue Shoes Mural was discovered when the building that had covered it was torn down. The sing has been recreated.

To your right, further up is the Chenoa Pharmacy:

Founded in 1889, Schuirmans'Drug Store has been operating since then. It still has the original wood floor. Visit it weekdays from 9 to 6 or Sat. 9 to noon.

Now it is owned by Rob Taveggia. visit their website for more information: chenoapharmacy.com

Built between 1855 and 1863, it belonged to the founder of Chenoa, Matthew T. Scott, who was one of the founders of the Daughters of the American Revolution. Adlai Stevenson I (23rd Vice President of the US from 1893 to 1897) married Letitia Green in this house in 1866.

Matthew Scott (1828 - 1891) Apart from founding Chenoa, he built almost 200 houses, cultivated 16,000 acres and laid more than 275 miles of hege fence (in the days before barbed wire). He drained land with tile drains and ditches.

This ends your drive through Chenoa. Turn around and head north along either the 1920s and 30s or the 1940s and 50s alignments (they both meet north of town), and head north to visit Pontiac.

The original alignment shown in Orange line in the map, ran from north to south along Morehead St. to US 24 and here continued south, along a section that is now under a field (in Black) in the map. It resurfaces when it meets US 66 south of town near County Rd. 3000N.

The original 1920s road had lanes 9 feet wide and was 6-inches thick. It was deteriorated by the trucks during WWII so it had to be urgently improved. 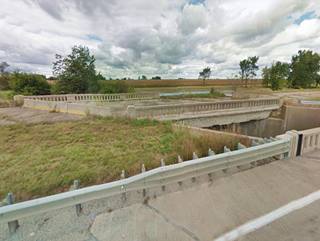 In 1943-44 it was improved: two lanes of 10 inch deep concrete, 24 feet wide were built on top of the old roadbed (southbound lanes) and the second set of lanes, northbound were completed in 1954-55.

Route 66 had become a four-lane divided freeway. It skirted round the western side of Chenoa.

This is all shown in Pale Blue in the map above.

Drive from Chenoa to Lexington on US66

The distance is only 8.3 miles and this is the Map with directions.

> > See the next segment Lexington to Towanda (west)