Groom is a small town located on Historic Route 66 in Texas, famous for its 198 foot tall Giant Cross, and its Leaning water tower.

Groom is located in the south of Carson County, in the central region of the Texas Panhandle.

The Panhandle region has been inhabited for over 10,000 years, their historic period descent were the Kiowa and Comanche Indians who hunted buffalo.

Following Texas' Independence and annexation by the U.S., White settlers entered the Panhandle. After a war with the Indians in the mid 1870s, they occupied the territory vacated by the natives, who were enclosed in reservations.

At that time, the county was founded (1876) and named for Samuel Price Carson, the first secretary of state of the Republic of Texas.

The open range drew the attention of Charles G. Francklyn, an Englishman, who formed a syndicate in 1881 to invest in livestock in Texas. The Francklyn Land and Cattle Company initially bought 631,000 acres of land in the Panhandle region of Texas and Oklahoma.

The company hired colonel B. B. Groom, a Kentucky cattle breeder and relative of Francklyn as its American manager.

Groom improved the local longhorns by importing polled Angus from Scotland and Shorthorns from Kentucky. He had wells drilled and invested in sheds, living quarters, barns, corrals and miles of barbed wire.

But the tough winter of 1886 and the high level of expenses led to the company's bankruptcy shortly after, followed by its reorganization as the White Deer Lands Trust. The new company brought in settlers and sold land to them and this led to the founding of farming communities like Groom and LeFors.

It was W. S. Wilkerson, a local landowner, who founded the town of Groom in 1902, naming it after the colonel.

Groom. This is an English family name which designated the person responsible for the feeding and taking care of horses. Etymology: from grom(e), Middle English for boy or servant. In East Anglia: servant or shepherd.

That same year, the Chicago, Rock Island and Gulf Railway laid down the station and Frank S. Dysart opened the first post-office in town. Soon there was a Bank, hotel, school and more stores.

Agriculture and ranching plus an oil boom in the mid 1920s grew steadily. Route 66 was created in 1926 and its alignment passed through Groom.

White Deer concluded its business successfully and was liquidated in 1957.

Population peaked at 808 in 1972 and then slowly decreased.

Where to Stay in Groom

There is lodging nearby, at Claude, 15 miles southwest of Groom along TX-207: LA Motel, Claude, TX.

> > Book your Hotel in Amarillo and Hotels in Shamrock

Book your hotel nearby, in Shamrock

What is the Weather in Groom?

The weather in Groom is semi-arid weather and has large variations between daytime and nighttime temperatures. The highs during summer average around 108°F (42°C) while the low temperatures are on average about 90°F (32°C). The high altitude of this part of Texas moderates the summer temperatures. Also, the nights are cooler, about 25°F cooler than the daytime (14°). The average high temperatures during Winter are about 52°F (11°C) with lows of around 25°F (-4°C).

Rainfall is scarce and adds up to some 20 inches (500 mm), most of it falling during summer. Sunny weather is very common and it helps moderate the winter daily temperatures. The Texas Panhandle area is very windy.

Snow. Sonw does fall in Groom. You can encounter snowfall between September and May. The first snow often falls during early December. On average the area gets 17” with peaks of about 40” (43 to 102 cm) per year.

Tornadoes, Groom is within the Tornado Alley. You can read more about Tornadoes on Route 66.

Groom is the next town after Alanreed, and the fifth town along I-40 and U.S. Route 66 after entering Texas from Oklahoma).

Check out Groom on our Texas Route 66 Map, with the complete alignment and all the towns along it.

Above is the map with the alignment of U.S. 66 in Groom, the color key valid for Groom only is:

Map with the alignment of Route 66 through Groom

Route 66's alignment in Texas: the Historic Route 66 through Groom

Below you will find full details on Old Route 66 in Groom.

Groom is famous for its Leaning water tower and a 198 foot tall Giant Cross.

Sights in the town of Groom

Driving along Historic U.S. 66 (Front St.) you will see several abandoned service stations (like the one on the northwest corner of Choctaw and Front Streets).

Nostalgia and the quiet simple ways of bygone days are still alive in Groom. Take a right onto Broadway St. and take a stroll along it.

Book your Hotel in neighboring Shamrock or Amarillo

On 203 Broadway, on the City Hall grounds.

At the State National Bank on 114 Main Street.

Marker #5101, erected in 1972. It tells about this private bank founded in 1904 and chartered state-wide in 1908. Among its directors were members of the local pioneers, the Brittens (of tilted-water-tower fame). The bank survived several crises, the Great Depression and 1930s Dust Bowl as well as both World Wars. To this day it supports its Groom customers in the oil and agribusiness.

Marker #1264 dated 1966, remembering Dr. Charles L. Fields (1858 - 1941), a local dentist and farmer. He worked as a carpenter to pay his way through dental school and settled in the region in 1903. He'd visit his patients at the ranches carrying his collapsible dental chair and foot-powered drill. 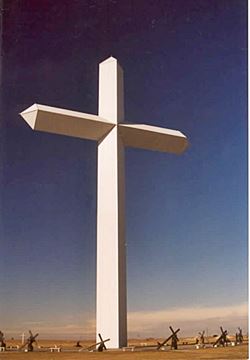 This gigantic cross is just west of downtown groom (see map above) and can be spotted from 20 miles away.

The basic steel structure of the cross was welded at a site located 40 miles from Groom and taken to the site where siding was attached to the structure.

The reinforced concrete foundations were poured and the different parts were assembled. And a crane was brought to the spot on seven flatbed trucks.

The cross' lower section was mounted on the foundations and the middle section was joined to it using 300 lb. (150 kg) steel pins.

At the base of the cross, around it, encircling it are several loaf-sized bronze statues with scenes of Christ being judged, carrying his cross, the last supper and the crucifixion with two thieves.

The site has rest rooms and a Cross Gift Shop as well as a Counseling Center and a stone crypt with angels.

The cross weighs 2.5 million pounds (1,13 million metric tons) and has been designed to resist the very strong Panhandle winds (140 mph)

It has been claimed to be the tallest cross in the Western Hemisphere but it is not. Other crosses are taller:

The concrete cross at the Valle de los Caídos - Valley of the Fallen (a Spanish Civil War memorial) was built in 1958 and is 150 meters (492 ft.) tall and weighs 440 million pounds.

Yet another building with a cross-shaped belfry 213 ft. tall (65 m) was built in Seinäjoki, Finland.

A steel water tower that is tilted in such a way that it seems to be ready to topple over. 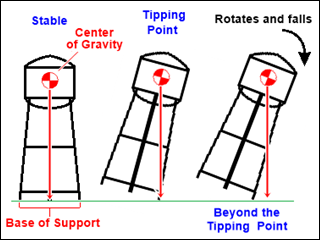 This eye catching water tower is located on the north side of I-40 and old U.S. Route 66. It seems as if it would topple over but it won't because it was deliberately placed there in a tilted position by the owner of a now long-gone truck stop, Ralph Britten (whose name figures on the tank that tops the tower).

Physics of a stable object: as long as the object's center of gravity remains within the base of support, the object will not topple over, but if it goes beyond the Tipping Point, it will fall. The center of gravity is the average location of the weight of an object. Figure by A. Whittall

Ralph Britten bought the tower structure in Lefors, 40 miles to the northeast of Groom and mounted it at his truck stop burying one side deep into the soil at a sharp angle, with the other side's legs clear of the ground, in the air.

As an engineer he knew the physics of stability: if the tower's center of gravity remained within the base of support it would stay put no matter what.

As the tank was empty, there was no extra water mass to displace the center of gravity beyond the base.

It drew attention and a steady flow of customers to his Tower Fuel Stop which was closed for good after a fire.

Just east of I-40s Exit 114 underpass you can still see the Tower Fuel Stop's sign with a "mini tower" mounted on its tip.

As an Army Air Corps engineer he had the know-how to put up the leaning water tower next to the Tower Fuel Stop that he owned and operated.

The remains of a small town (Read more about Lark).

Nine miles west of Groom, there is a segment of U.S. highway 66 that was listed in the National Register of Historic Places in 2007.

To the East is the infamous «Jericho Gap», a sector of the 1930s highway that was unpaved and became a quagmire when wet.

Site of a vanished town

The site of a former town, Boydston on the Jericho Gap:

Set close to the Donely county line, it was first settled by Henry Sanford Boydston, hence its name. A post office opened in 1891 but later moved away. The Chicago, Rock Island and Gulf Railway built a siding here in 1903.

The creation of the National Highway System in 1926 with the Chicago to Los Angeles highway passing through Groom brought some prosperity: travelers passed through the town and stopped at the service stations and tourist courts, diners and garages.

I-40 bypassed the town on its northern side and visitors dwindled.

See next section of US Route 66:

From McLean to Conway, TX

US 66 crosses its Main St. (8.6 miles), and once west of the town, (9 mi.) keep west along the south Frontage Road of I-40. The road cruves towards the southwest but (12 mi.) at Exit 132 of I-40 you have to leave the old road as it becomes a dirt surface road further ahead and then becomes a dead end.

The infamous muddy stretch of the Jericho Gap starts here. But the less adventurous should stick to I-40 for the next few miles.

Follow I-40 west and leave it at Exit 124 (19 miles), get on to TX-70 southbound, cross to the south side of I-40. Here you can visit the old Jericho Cemetery, a few miles southwest of the Exit and drive the western part of the Jericho Gap into Conway.

Otherwise keep on the I-40 westbound and (22.4 mi.) take the overpass at Exit 121 and drive along the south service road westwards.

Route 66 continues west of Groom, below is the description of the road to Conway:

Shortly after, (47.2 mi.) there is yet another crossing: FM 2161 heads west; this road is the old US-66, it continues west towards Amarillo. At this crossing is the site of the small town of Conway.

Road Safety in this segment

Be cautious, as the exit and entry ramps of I-40 do not intersect its service roads; instead they merge with them. Those who are driving the on- and off-ramps have the right of way. Drivers along the I-40 Service Roads must therefore yield to those on the ramp. Pay attention when approaching a ramp. Drive safely.