Romeroville is located at the junction of the Ozark Trail and the Santa Fe Trail spot marked by the now demolished Ozark Trail Obelisk. The 1926 to 1937 alignment of Route 66 between Santa Rosa and Santa Fe passed through the town.

Romeroville is a small community located on the junction of US-84 with US-85 & I-25. At one time Route 66 following the formar Ozark Trail met the Santa Fe Trail at this point and headed west towards Santa Fe.

People have lived in this part of New Mexico for at least 10, 000 years, the Pecos River was a main route linking the Sangre de Cristo Mountains in the north with the plains and the Llano Estacado in the southeast.

This part of New Mexico was not actively settled during the Spanish Colonial period (1598 - 1821), it was too far from the capital at Santa Fe across the Sangre de Cristo Mountains and its location on the foothills next to the Great Plains exposed it to the raids of the Comanches and Apaches. It was however a strategic trade route linking New Mexico with the east, and the Santa Fe Trail passed through the area.

Some time after Mexico won its independence from Spain in 1821 did the meadows attract Mexican settlers in the 1830s who founded Las Vegas a few miles west of where Romeroville is now located. But Mexico lost the territory to the U.S. after its defeat during the Mexican - American War (1846 - 48). The Mormon Batallion led by General Kearny passed through Las Vegas and what would become Romeroville in 1846; the pass west of the village, shown above, bears his name.

The town was named after Trinidad Romero (1835-1918), a business man of Hispanic origin, from Santa Fe, who owned a freight company that worked the Santa Fe Trail. He set up his offices at a ranch just south of Las Vegas in the 1880s. He was also a representative in the Territorial house of representatives and congressman (1877-79).

The U.S. Army quickly neutralized the Indian attacks and pacified the area, trade grew along the "Santa Fe Trail". One trader, Don Trinidad Romero chose this point to set up his headquarters on the Santa Fe Trail, it was the beginning of Romeroville. 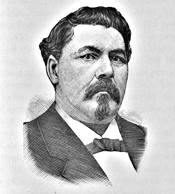 The establishment built by Don Romero coincided with the arrival of the railroad. The station was named after him (without the "ville" part), and it was a humble place described in a 1915 description by the USGS of the area as "Romero (ro-may'ro) 6, 287 ft. 791 mi. from Kansas city. A siding.".

Romero built a two-story adobe mansion which later became a hospital and finally a "dude ranch" which burned to the ground in 1932. (See a photo of the mansion taken in 1900).

Romeroville was built at a strategic location just west of Las Vegas: it was the point where the railway took a southwards course at the junction of the trail leading along Gallinas Stream to Santa Rosa and the Santa Fe Trail to Santa Fe.

Just to the west of Romeroville is Romeroville Canyon, a gorge in the mesa that links Las Vegas westwards with Bernal, now used by I-25 and US-85 but which was the original route of the "Santa Fe Trail" and later, the alignment chosen for Route 66 in 1926.

A "Guest Ranch" or "Dude Ranch" is a ranch that caters to visitors and tourists, giving them a taste of the "Old Wild West" and the life on ranches.

The railroad towards Santa Fe from Romeroville headed south (parallel what is now US 84), through two stops: Ojita mi. 779; the Spanish word (O-hee'ta) means little spring, from "ojo de agua" or "water-eye") and Sulzbacher before turning west into Bernal.

After 1937, Route 66 was realigned along a shorter course from Santa Rosa to Albuquerque through Moriarty and the road through Romeroville from the south became US 84, and the one that passed through it from east to west, US 85.

> > Book your Hotels in nearby Las Vegas

Lodging Near Romeroville along Route 66

West along the later Route 66 alignment

>> There are RV campgrounds near Romeroville

Summers are warm and winters quite cold. The area is dry.

There are 272 sunny days and 62 precipitation days per year in this sunny and dry town. Snowfall is around 27 in. per year, and falls between Nov. and March.

Romeroville is located in an area with virtually no tornado risk: San Miguel county only has two (2) Tornado watches per year and mostly in the eastern fringe of the county.

Just 7 miles east of Romeroville is Las Vegas and to the west, along the old Route 66 is Pecos and Santa Fe (60 mi.)

Far, towards the southwest, on the crossing of old an new alignments of Route 66 is Albuquerque (116 mi.)

See the alignment of US 66 in Romeroville, on our New Mexico Route 66 Map, it has the complete alignment across the state with all the towns along it.

The color key for this town is:

Where the Ozark Trail meets the Old Santa Fe Trail

Romeoville is a small community at the junction of the Ozark Trail and the Santa Fe Trail on the 1926 to 1937 alignment of Route 66 between Santa Rosa and Santa Fe.

The railway and US 85 ⁄ I-40 follow the "Santa Fe Trail" with an east to west alignment.

Santa Fe was linked to Mexico City to the south by the "Camino Real de Tierra Adentro", a Royal Highway built by the Spanish Crown. But another important trail was opened in the 1792 across the Great Plains to trade with the French Louisiana settlements on the Missouri River (now St. Joseph and Independence MO).

Wagon trains used it to move goods from the east into New Mexico, and later, pioneers trekked along it to settle the west.

Upon reaching New Mexico it split into two forks to reach Santa Fe, one of them went through Las Vegas, Romeroville and Pecos.

They all cross Kearny Pass, a historic point just east of the village.

The image above shows the cutting at Puerta del Sur just east of Romeroville. The railway is on the left, I-40 cut right through the hill further to the right.

A tower built in stone stood over the Pass, it was known as the "Torreón", it was built to guard against the Indian raids.

U.S. highway 85 which passes by the north side of Romeroville is, with Interstate 25 known as the "CanAm Highway":

It was also the point where the Ozark Trail met the Santa Fe Trail.

The Ozark Trail Association was the brain-child of William Hope "Coin" Harvey (1851-1936), an entrepreneur, teacher and active promoter of tourism. He foresaw the importance of the automobile in America and established the Ozark Trail in 1913 to promote good roads, road signs and maps.

The Ozark Trail soon grew to span Missouri, Oklahoma, Texas and eastern New Mexico. When Route 66 was created, it was aligned along the Ozark Trail from NM to MO.

As there were no Federal highways at that time, monuments shaped like pyramids or obelisks were erected at key locations and the mileage to major cities were painted on the markers.

One can still be seen in Oklahoma (Between Stroud and Davenport).

There was another at Romeroville, the western terminus of the Ozark Trail.

It was a 50 foot obelisk that was located at the junction of the Santa Fe Trail and the Ozark Trail. That is, modern US 85 which was the Santa Fe Trail from Santa Fe to Las Vegas, and current US 84, which linked Las Vegas to Santa Rosa NM, and would later become the 1926 - 1937 alignment of Route 66.

Visit, to the northeast, the nearby town of Las Vegas, to the south, is Santa Rosa, and to the west 1926 alignment of Route 66 leads to Pecos and Santa Fe.

The 1926 - 1937 alignment from Dilia to Romeroville is now part of US 84 almost all the way to Romeroville. Head north along it, from Dilia, passing by the access to the Aurupa Site and as you approach Romeroville, just before the junction with I-25 and US 85, take a right along "Camino Romeroville", into the small village. It will lead you to the place where the Ozark Trail Obelisk once stood.

Take a left and head west along the old U.S. 85 (which used to be the old Route 66) and now is NM-A25A. It will end in a dead end marking the end of the original alignment. You will have to back track and get on to the I-25 at Exit 339 and head west along it towards Tecolote.

See the map (Dilia to Romeroville).

Almost the whole roadbed of Route 66 has been destroyed when I-25 was built. You will have to drive along I-25 all the way to Tecolote and once you reach that town, leave the Interstate at Exit 335 head to the eastern side of it and follow the "Camino Viejo" (Spanish for "Old Road") until it ends (0.8 mi.). That is what remains of US 66. Go back to the underpass, and head into the village.

Take B47A southwards towards Tecolote Creek. The road ends there as the bridge is gone. But this is the original Route 66 alignment through Tecolote, you can still see the concrete pylons in the river bed.

This map shows the alignment north of the Creek Map of Route 66 in Tecolote.

See the alignment of Route 66 from Tecolote to Bernal.

NM 6 which linked Santa Rosa with Albuquerque via Moriarty was finished in 1927 but only later was it paved and finally, in 1937 it was incorporated into the new alignment of Route 66 that "cut-off" Santa Fe, shortening the road and providing a quicker paved route to Albuquerque and the Pacific Coast.

Romeroville was also cut off by this new alignment.

> > Tecolote to San Jose through Bernal.