The town of Staunton is located on the 1926 to 1930 Alignment of Route 66 and it is grazed by the 1930 to 1940 alignment too.
Visit the 1930s Decamp Junction Roadhouse and the iconic and Route 66 Attraction: Henry’s Rabbit Ranch with its Campbell 66 Express trucks.

The Main Alignment of Route 66 (after 1940) near Staunton

All about Staunton, Illinois

Staunton is a city in Macoupin County, in southwestern Illinois, on the 1926-1940 Route 66 alignments, (Map of Staunton).

Human beings have lived in Illinois since the retreat of the glaciers at the end of th last Ice Age some 12,000 years ago.

The locan natives were Illinoisian Indians were the first to meet white settlers (French trappers and explorers canoeing down the main rivers from Canada) in the 1600s.

The Illinoisians were later moved out of the territory as European settlers occupied it.

Macoupin County was established in 1829 and named after Macoupin Creek named in turn for the Miami-Illinois term for the American lotus (Nelumbo lutea).

The Illinois Traction System passes through Staunton from 1904 to 1956. And in 1926 the original US 66 is aligned through town. In 1930 it was realigned to the east, grazing the town and bypassing its central district. In 1943 it was completely bypassed by the new alignment through Livingston.

The story goes that a man named Stanton (without the "u") donated the land to the village for a square (accounts differ on the person, perhaps Thomas or James Stanton who were early settlers here). When the post office was to be named it was decided to pay homage to him by naming the post office after him.

The Post Office Service in Washington added the "u" resulting in "Staunton", which is also the name of a village in Virgina.

The surnames Stanton and Staunton are both topographic surnames given by Anglosaxons to people who lived near a Stanton or "Stony Ground".

Route 66 was aligned through the town in 1926 and in 1930 it was displaced to its eastern side. Finally in 1940 it bypassed Stanton completely, running past Livingston further east.

Staunton, its Hotels and Motels

> > Book your hotel in Staunton

More Accommodation near Staunton on Route 66

Find your room in Staunton

>> Check out the RV campground nearby in Douglas

Summers in Staunton tend to be humid, warm and long while winters are short and freezing as well as windy.

Staunton is in an region that is hit by about seven (7) tornados per year.

Map of Route 66 through Staunton, Illinois

See the alignment of US 66 in Staunton, on our Missouri Route 66 Map, it has the complete alignment across the state with all the towns along it.

This is the color key for Staunton:

Below you wil find More information on all three US 66 alignments near Staunton.

What to see in town

Jack Rittenhouse did not mention Staunton in his "Guidebook" to Route 66 published in 1946 because he drove down the later alignment finished in 1940 from Mt. Olive through Livingston, that bypassed Staunton.

There are no former gas stations or diners or motels in town belonging to the 1926-30s period, however, approaching Staunton from the west, from Hamel and taking State Hwy 4 northward you will reach a Route 66 Roadhouse: 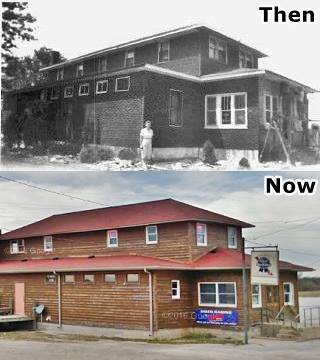 This is a historic roadhouse and in the past there was tourist cabins a dance hall and even a brothel. It was next to a gas station on the 1926 to 1940 alignment of Route 66.

Illegal alcohol and gambling were rife in the early 1930s when gangsters robbed the place. Now it is a tavern with plenty of US 66 mementos and photos. Check its "Now" and "Then" appearance in the picture:

Originally it stood on the opposite side of the highway. It opened in 1931 and was run by Alois and Elnora Duda.

Just ahead is a fork in the road. Continue straight ahead along the 1926 to 1930 alignment continues straight eastbound (Orange arrow) into Staunton or take the 1930-1940 alignment that turns right (Blue arrow) and borders the east side of Staunton. Below is a view of the fork:

The place is the work of Rich and Linda Henry. You can learn more at their website www.henrysroute66.com

This is an attraction made to fit Route 66. The Standard Oil gas station, even though it looks real, is a replica. Its "Hare It Is" sign is a wink to the well known Jack Rabbit Trading Post in Joseph City Arizona,with its famous "Here it is!" billboard.

It is a celebration to US 66 and has a good collection of memorabilia (see the neon sign of the Stanley Courtel Motel), including the Campbell 66 trucks that face the highway:

Franklin George Campbell founded it in 1926 in Springfield, Missouri. By 1933 it acquired the Rapid 66 Express running between Springfield and St. Louis along U.S. 66.

Campbell pruchased many truck companies over the next decades expanding his company to 26 Midwestern and Southern states in the US.

The 1980 Deregulation Act placed strict regulations on trucking and this liquidated the company it went bankrupt in 1986.

Their logo and mascot was "Snortin' Norton" the camel, and it was painted on their trucks with their motto: "Humpin to Please" as you can see in the image below:

The Replica gas station is very cool too. And in front of it are some buried cars, another homage to the Cadillac Ranch on Route 66 in Texas:

Replica gas station behind and buried cars in the front in Staunton, Illinois

The buried cars consist of a group of sevencars half-buried in the ground, with four facing one way and three the other, they are almost vertical, and are of different makes.

They are a homage to the well-known art work from the 1970s: The Cadillac Ranch on Route 66 close to Amarilo Texas, with its half-buried Cadillacs.

The Buggy Farm in Conway Texas, on Route 66, east of Amarillo is another parody of the Cadillac Ranch, known as the Bug Farm, Buggy Ranch and Bug Ranch. It consists of five Volkswagen "beetles" buried nose-down in the ground.

These are the main sights in town. Further away was the now gone 66 Terminal: a large truck stop which opened in 1940 on the newer 1940-1977 alignment now replaced by I-55. It had a motel a café. A used car dealership stands on the site because the old stop was torn down.

Also close to the freeway is a Classic Cars business:

On the north eastern side of Exit 41 on I-55 on your way to Mt Olive. It features over 400 classic cars and trucks and a Route 66 gift shop with collectibles. 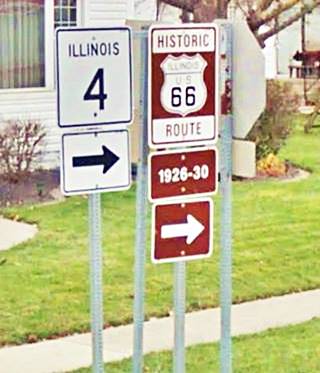 The first alignment of Route 66 followed State Higway No. 4 from Hamel, eastbound. It turned to the north at present Exit 33 of I-55, where the access to Worden is located. And continued northwards into Stanton and from there along IL-4 onwards past Sawyerville and into Bendl. It bypassed Livingston to the west.

This is shown in Orange in the map above.

This is a map with directions with the 6 mi. drive from Exit 33 into Staunton.

Seeking a straighter alignment the Illinois Division of Highways led by Thomas Sheets moved Route 66 eastwards between Farmersville in the east, through Litchfield, and Mt. Olive here it took a SW course towards Stanton.

This too bypassed Livingston. It branched from the previous alignment just south of Stanton, coursing around the town's eastern side with a northeastern tack. North of present Exit 41 on I-55 it turned north and then once more it took a NE course into downtown Mt. Olive.

The alignment is shown in Blue in the map above.

This alignment completely bypassed Stanton, and the roadbed is now buried beneath the freeway east of Exit 33 on I-55. It resurfaces on the eastern side of Livingston but only appears with its original surface at Exit 41, where it heads north, to bypass the town of Mt. Olive along its western and northern sides.

> > See the next segment In Hamel (west)