Pecos, on the Old Pecos Trail is the place to visit the Pecos National Historical Park with Pecos Pueblo, the Mission Nuestra Señora de los Ángeles de Porciúncula de los Pecos and the Forked Lightning Ranch, a Dude Ranch. Close to town is the Our Lady of Guadalupe Abbey & Monastery and the Glorieta Pass Battlefield, the site of an American Civil War battle.Pecos lies on the original 1926 alignment of Route 66 along the Santa Fe Trail in New Mexico.

Pecos is town in San Miguel County which has grown recently due to commuters that live there and work in Santa Fe. The Pecos River runs along the northern and eastern sides of the town, from its sources in the Sangre de Cristo Mountains in the Santa Fe National Forest. See map with the location of the village.

This part of New Mexico has been inhabited for more than 10,000 years (the nearby site at Sandia Cave is proof of this). Later the Pueblo people settled in the valleys of the rivers that flowed south from the Rocky Mountains, to farm the fertile soil.

The area around Pecos was settled by Native American farmers in the year 700 AD and the ruins at the Pecos National Historic Park on Glorieta Creek survive to this day. The area was an important trade center between the Pueblo people and the Indians from the plains to the east. The Pecos River was the "Old Pecos Trail".

The expedition led by Spanish "Conquistador" Francisco Vasquez de Coronado reached Pecos in 1540, they were the first Europeans to visit the region. Coronado named the native people "Pueblo", after the Spanish word for "village".

In 1598, Juan de Oñate occupied the region as a Spanish Colony, and the Mission Nuestra Señora de los Ángeles de Porciúncula de los Pecos was established at the Pecos Pueblo in 1619.

The local natives spoke Towa language and their words "pa-kyoo-la", later deformed to "Pecos", meant "place where there is water".

The Spanish opression and exploitation of the natives led to the Pueblo Revolt (1680) and the expulsion of the Spaniards. They returned in 1693 and subdued the Pueblo Indians but adopted a softer stance with them.

The settlement in the area was slow and a formal land grant was approved in 1815, when the "Cañon de Pecos" was awarded to Juan de Dios Peña.

In 1821 it became part of the territory of an independent Republic of Mexico. The constant raids by the Apache and Comanche made the few residents leave the Pueblo at Pecos in 1838; they moved across the Rio Grande to Jemez Pueblo. Mexico ceded the territory to the U.S after its defeat during the Mexican - American War (1846 - 48). During the Civil War, the Confederate troops fought a battle with the Union forces near Pecos (1862).

The Atchison, Topeka and Santa Fe Railway built its tracks along the Santa Fe Trail in the early 1880s and established a station 4.5 mi. west of Rowe, Which was named Decatur, then Fox, and finally Pecos.

A mine, the Terrero Mine, operated in the Canyon north of the town between 1882 and 1939. It was a source of income for the village.

In 1926, Route 66 was aligned through Pecos and several roads were built in the Pecos Canyon by the Civilian Conservation Corps during the 1930s. Dude ranches were established in the area: the Forked Lightning Ranch and Valley Ranch were two of them.

In 1937US 66 was realigned further south, between Moriarty and Santa Rosa, bypassing all the towns along the Santa Fe Loop including Pecos.

> > Book your Hotel in nearby Las Vegas and Santa Fe

Lodging Near Pecos along Route 66

West along the later Route 66 alignment

>> There are RV campgrounds near Pecos

The weather in Pecos

Pecos is located in an area with virtually no tornado risk: San Miguel county only has two (2) Tornado watches per year and mostly in the eastern fringe of the county.

Pecos has hot summers and cold winters, the area is quite arid and dry.

Snowfall is around 25 inches (63.5 in.) on average and can fall at any time between November and April. Most falling during Dec. and Jan (6 in. each). Rainfall is 17.2 in. per year (437 mm). The rainiest months are June through Sept. with almost 10 inches of rain.

The village is located to the northwest of Santa Rosa along the 1926 to 1937 alignment of Route 66.

To the east is Las Vegas, San Jose and Romeroville.

To the west, along the old Route 66is the village of Glorieta and Santa Fe. To the southwest is Albuquerque wher the old and new alignments of Route 66 meet again.

Pecos is a small town nestled between the Sangre de Cristo Mountains and the Pecos River on the "Santa Fe Trail" and the 1926 alignment of Route 66.

The town is aligned along NM highway 63 which has a north-south direction. Head north after the junction with NM-50 into the old part of town and see the church on the right side of the road.The building replaced the original adobe church built in the 1830s.

Cross the Bridge over the Pecos River, and after 0.5 mi, on the left is the Monastery:

Our Lady of Guadalupe Abbey & Monastery

The site of the monastery was initially a Dude Ranch, the "Valley Ranch". When business turned sour, it was sold and became a Trappist monastery in 1948. It changed hands again becoming a Benedctine monastery (until 1985). Today it is still an Olivetan Benedictine monastery, used for group and individual retreats and spiritual guidance.

The Spanish settlers at Santa Fe opened the "Santa Fe Trail" in 1792 to link their city with the French trading posts in Louisiana, on the Missouri River.

Much later, the wagon trains used it to move merchandise to and from New Mexico. It was also on of the main t rails used by the settlers to reach the Southwest and the coast of the Pacific Ocean.

To the east, visit San Jose, Las Vegas and, further south, is Santa Rosa. Head west along the 1926 alignment of Route 66 to reach Glorieta and Santa Fe.

Book your Hotel in

Head south of Pecos along NM-63, it is only 2.2 mi. to the entrance to the Park. See this Map and directions.

The Park preserves the ruins of Pecos Pueblo (or Ciquique) and the remains of the Mission Nuestra Señora de los Ángeles de Porciúncula de los Pecos.

There is a self-guided trail (1.25 mi. long - 2 km) which you can take through the Pueblo and also, visit the mission.

The pueblo of Cicuique (which we now know as Pecos Pueblo) is located on a rock outcrop that faces the Pecos River.

The pueblo was inhabited for five centuries between 1,300 and 1838 AD, and was the easternmost of the Spanish Colonial Pueblos.

The Spanish reached Pecos Pueblo in 1540 when Hernando de Alvarado visited "Cicuique" (Ciquique). He reported that the town had four-storied buildings and a population of 2,000. They were farmers who grew corn, squash and beans. They maintained a relative truce with the Tewa natives of the Great Plains, and the fortified pueblo deterred any attacks.

The Spanish returned in 1591 under Gaspar Castaño de Sosa and confronted with a hostile reception, attacked the pueblo, subduing it. In 1599 the Governor Oñate renamed it as Santiago and assigned a missionary to convert the natives. This was the origin of the "Mission": 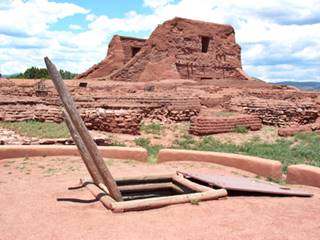 Ruins of Pecos and in the background the Pecos Mission Church

A church was first established at the Pecos Pueblo in 1619, on a ridge abouth 1⁄4 of a mile to the northeast of the village. It was part of the Mission of our Lady of the Angels of Porciuncula (which is the name of a small chapel in the municipality of Assisi in Italy). A second building replaced it in 1625, next to the village but it was destroyed during the uprising of the Pueblo people in the 1680 Pueblo Revolt.

During the revolt, the natives built a traditional kiva (ceremonial room) in front of the church.

After the Spanish returned in force in 1693, they reasserted their power over the natives and erected a third church on top of the former building, in 1717.

The remains of the church display thick adobe walls and a fortress-like structure enclosing the atrium.

This ranch forms part of the Pecos National Historical Park and is the central section of the 13,000-acre ranch that belonged to movie star Greer Garson and her husband Buddy Fogelson.

The ranch has a long history: John "Tex" Van Austin bought land on the old Pecos Pueblo Grant in 1925 and created the "Forked Lightning Ranch". He included the old building of Kozlowski's Stage Stop and Tavern, which had served travellers along the Santa Fe Trail (1858-1880). He added a trading post and commissioned architect John Gaw Meem to design and build the main ranch house next to the Pecos River.

Route 66 brought tourists and Tex converted his property into a Dude Ranch.

A "Guest Ranch" or "Dude Ranch" is a ranch that caters to visitors and tourists, giving them a taste of the "Old Wild West" and the life on ranches.

But the Great Depression ruined the business and it closed in 1933, Tex went broke and sold the ranch to W.C. Currie in 1936. In 1941 it was acquired by E.E. Buddy Fogleson, a rich Texas oilm man who married actress Greer Garson in 1949. They expanded the ranch from its original 5,599 acres to its current size.

After Buddy's death, his wife sold it to The Conservation Fund in 1991, which in turn donated it to the National Park Service.

The pass and battlefield are only 5 mi. west of Pecos along NM-50: Map and directions.

Visit our page on Glorieta, for full details on the Glorieta Pass Battlefield.

Route 66 from Pecos to Santa Fe

From Pecos, the old US 66 heads west as NM-50, towards Glorieta, it enters the town, but ends in a dead-end along Firestation Rd. (Map Pecos - Glorieta), so you will have to get back on I-25 to cross Glorieta Pass and reach Canoncito (Spanish for "Tiny Canyon"), where you should stop at the historical church:

The Nuestra Senora de Luz Church ("Our Lady of Light") and Cemetery was built in 1880. And is located 11.3miles west of Pecos on the north frontage road, Canoncito 998 (Old Las Vegas Hwy.), see the Map and directions from Pecos.

At this point you can follow the old Las Vegas road after Exit 294, which is the 1930s alignment all the way into Santa Fe, as shown in the following map: Canoncito to Santa Fe map.

NM 6 which linked Santa Rosa with Albuquerque via Moriarty was finished in 1927 but only later was it paved. In 1937 it was incorporated into the new alignment of Route 66 that "cut-off" Santa Fe, shortening the road and providing a quicker paved route to Albuquerque and the Pacific Coast. This alignment also cut off Pecos.

> > See the next one, the 1937 alignment from Santa Rosa to Clines Corner (to the south and west)

Above we mention the Pecos National Historical Park which also has outdoor activities. Also check the Parks at Las Vegas.

The park is 34 mi. south of Pecos, via San Jose, Map from Pecos to the park

Located to the south of Pecos, it includes sandstone mesas and the Pecos River canyon. There are places to picnic or camp and hiking trails. There is an RV park too.

The Pecos District manages the Pecos wilderness area with 223,000 acres. Ideal for hiking, fishing and camping.