The Village of Plainfield is where The Lincoln Highway Meets Route 66; don't miss its 1920's Historical Standard Oil Gas Station or the 1930s Old gas station in town; a must-see is Plainfield’s Downtown Historic District and a school from 1851 which is now The Plainfield Inn

The Main Alignment of Route 66 in Plainfield

The Village of Plainfield is located on the 1940-1958 Route 66 in Will County Illinois. (A Map of Plainfield).

The French explored the Great Lakes, Illinois and the Mississippi River in the 1660s. They met the Illinois, Potawatome and Kickapoo people there. In the mid 1700s France ceded the land to England, who in turn lost it during the American Independence wars. The territory became the state of Illinois in 1818.

A Plainfield druggist whose German surname was "Sonntag" (Sunday) topped ice cream with syrup and nammed it after himself. The "sonntag" soon became the "sundae".

At that time, there was a settlement of Potawatomie Indians along the DuPage River. In the 1820s James Walker settled there; his father-in-law, Rev. Jesse Walker evangelized the natives. In 1828 James staked a claim and built a sawmill. In 1830, the first settlers at "Walker's Grove" arrived: Reuben and Betsey Falagg.

The village was platted by Chester Ingersoll in 1834 as "Plainfield". In 1836 Will County was created, and named after Dr. Conrad Will who had been a member of the first Illinois Constitutional Convention and later a member of the Illinois Legislature.

At the end of the last Ice Age, what is now the area surrounding Plainfield was the bed of Lake Wuponsee, a glacial melt lake that drained into the Illinois River. It dried up, leaving a very flat (or "Plain") landscape.

This verdant prairie that extended west of the thickly wooded DuPage River was indeed a "Plain Field", which gave the village its name.

The Illinois and Michigan Canal was built in the 1840s and it bypassed Plainfield. It became a farming community as industry established itself at communities located on the canal.

When Route 66 was created in 1926 it didn't pass through Plainfield, instead it ran further east, through Romeoville and Joliet. However, in 1940 a straighter course was built for Route 66 and this one went through Plainfield until the late 1950s, when US 66 moved east, sharing the freeway with I-55 until it was decertified in 1977.

Plainfield: Hotels and Motels nearby

Find your room in Plainfield:

>> See the RV campground nearby at Joliet

The climate of Plainfield is classified as humid continental and has clearly marked seasons with hot and often humid summers, cool and wet springs, mild falls and cold winters.

Will county around Plainfield experiences some 5 tornados each year.

How to get to Plainfield?

You can get to Plainfield via Historic Route 66 or former ALT US-66 (and then Lincoln Highway from Joliet) and also by using I-55 and taking either of these exits: 263 (east) or 257 (west).

Map of Route 66 through Plainfield, Illinois

See the alignment of US 66 in Plainfield, on our Illinois Route 66 Map, it has the complete alignment across the state with all the towns along it.

Below you will find More information on Route 66 in Plainfield.

What to see in Plainfield

US 66 in Plainfield: historic context

The "Guide Book to Highway 66" published by Jack DeVere Rittenhouse in 1946 described the Mother Road from Chicago to Los Angeles; he drove past Plainfield and wrote this:

The town had "Gas; stores; Ferd's Motor Sales Garage..."; he then described the highway south of Plainfield as "... an Illinois 'freeway'" built under the 1943 act and that when completed from Chicago to St. Louis would allow safe and quick driving as it skirted small towns and placed cafes, motels and service stations off the road (like modern freeways).

He continued with his description of the highway, mentioning cafes and gas stations at the junction of US 66 with US 52 (they are now gone). He also mentioned the Kankakee Plant of the Joliet Arsenal, that produced weapons during WWII; and that 21 miles south of Plainfield was a gas station and one mile ahead another one with a cafe and cabins. (all of them have vanished).

Begin on the north side of town, driving from east (Chicago) to west, where IL-126 branches off from I-55. This is a map with directions, it is a 3.5 mile drive to visit all of Plainfield's Route 66 attractions:

At N. Divison St. take a left southwards along Historic U.S. 66 and then at Lockport St. turn right and visit the Historic Downtown District:

Plainfield's Downtown Historic District runs along Lockport Street (Lincoln Highway) between Route 59 and James Street. It includes 53 properties of differenty styles and building types that span 120 years, from the 1840s to the 1960s in Plainfield, Will County's oldest community. Below is just one example of the historic district, the "Opera House Block" in a "Then and Now" sequence:

The Opera House Block on 502 W. Lockport Street was built in 1898 in the Queen Ann Style and the copper roofed turret is its distinctive feature. It replaced the original Opera House which burned down in the 1898 fire.

It became a live and movie theater in 1915 (the Alamo Theater) and later it was a dance hall (The Blue Goose). It has been restored and is still standing:

On the next block, to your left, is the Historical Standard Oil Gas Station:

Designed in the "House with Canopy" style: a white stucco building with a red metal tile roof, it was built in 1928 on a corner location on the Lincoln Highway.

In 1932 it became "Overman's Certified Texaco Station" and from 1956-1962 it was Allen Hall's Texaco. More recently (as shown in the photograph below) it became the Welco Gas Port which closed in 1983. It was renovated and enlarged by the Andreasen's as "The Courtyard" retail complex built with a similar design.

A more recent view, now as a repurposed building:

Head west along W. Lockport Rd. for one block and take a right onto S. Fox River St., to your right is a historic building which is now an inn (The Plainfield Inn): 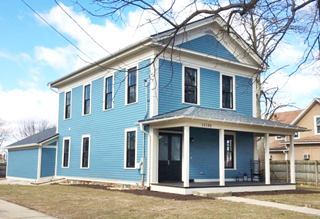 The building was originally a schoolhouse built in 1851. It became a home in 1882, and over the last 135 years has been home to three families: The Goodson/Herrington family line, the French family and now the Myers family.

It is a beautiful example of 19th century Greek Revival architecture with a low pitched roof and pediments that remind us of the roof of a Greek temple (like the Parthenon).

> > Stay at the Inn in one of three second floor suites, each with their own bathroom.
More information at their website (www.theplainfieldinn.com).

Retrace your steps back to US 66 and turn south (right); from this point and for the next three blocks, Route 66 and the Lincoln Highway overlap:

Like the National Old Trails, the Lincoln Highway was a private initiative: cars needed decent roads, the dirt trails that became quagmires when it rained were not suitable for automobiles.

Carl Fisher owner of the Prest-O-Lite Headlight Co. and founder of the Indianapolis Motor Speedway canvassed his fellow automobile industry entrepreneurs and founded the Lincoln Highway Association in 1913. The objective was to build a highway across America from New York to San Francisco and it was dedicated to Abraham Lincoln.

It became the first paved transcontinental highway, 3,400 miles-long. It was paved through Plainfield in 1921.

Marker: Lincoln Highway Meets Route 66 in Plainfield, Illinois. This marker is south of town, where US 30 and IL-59 meet

The Illinois portion of the Lincoln Highway was designated as an Illinois State Scenic Byway in 2000 and a National Scenic Byway.

Both highways meet twice in Will County. The first, took place in 1926, when a brand new Route 66 was aligned through Joliet, crossing the Lincoln Highway there (read more about Lincoln Highway and Route 66 in Joliet).

Then, in 1940 when U.S. Route 66 realigned through Plainfield it crossed the Lincoln Highway here.

The two longest highways in the world at that time met in Plainfield Illinois.

To your right is a box-shaped former gas station with a two-bay garage and office. No canopy or pumps have survived, but it was strategically located at the point where The Lincoln Highway and Route 66 met, on the south side of town. Now it is "Plainfield Automotive" an auto repair shop.

This is the end of the tour through Plainfield you can head south along I-55 into Braidwood or use US-30 to reach the 1926-39 Route 66 in Joliet.

Route 66 was created in 1926. It ran along the recently paved State Hwy. 4 east of the Des Plaines River and Plainfield. It went through Romeoville, Joliet, Wilmington and Braidwood along what now is IL-53.

In 1939, traffic had grown on US 66 so a straighter alignment was built, it branched off from the older one along IL-126, and turned south through Plainfield along a new highway (present IL-59) in a straight north-south course all the way to Braidwood, where it met the old alignment but ran parallel to it, on the west side of the tracks that separated both alignments. The two roads old and new met finally south of Gardner.

Route 66 remained aligned through Plainfield until 1958 when US 66 was moved further west to a brand new freeway that bypassed all the towns north of Gardner, including Plainfield, Plainfield. US 66 and I-55 shared the newfreeway.

By 1945, Route 66 north (east) of Plainfield, all the way to present Wellco Corners had been designated as ALT 66.

And Route 66, the main highway now ran along a new highway parallel to the old one, on the western side of the railroad, between Plainfield and a point just north of Plainfield. Here it turned sharply and took a straight course northward, crossing the Kankakee River and passing by "Blodgett", then it crossed the Des Plaines River and intersected US 6, passed by "Birds", intersected US 52 and finally reached Plainfield where it met US 30 and turned with a northeastern course towards Cicero and Chicago. It met the ALT 66 at Wellco Corners.

Drive from Plainfield to Braidwood on Route 66

It is a 24.5 mi drive from Plainfield to Braidwood; this is the Map with directions.

> > See the next segment Braidwood to Godley (west)

For those who love nature oand outdoors, you can drive south of Plainfield to Channahon State Park and trek the Illinois and Michigan Canal (I&M Canal) Trail. You can start here, just south of US 6 and I-80, a short distance to the SW of Route 66 (I-55).

It is a 61.5 mile-long trail from Rockport to LaSalle. Read more at its Official website.