Countryside was the site of the now gone Wishing Well Motel -whose well and neon sign are now on exhibition in the Route 66 Hall of Fame Museum in Pontiac.

The Main Alignment of Route 66 in Countryside

Countryside is a city located in Cook County, Illinois, see this Map of Countryside.

Joseph Vial settled with is family in what was then known as Flag Creek in 1833, just two years after Cook County was created.

Cook County is after Los Angeles County, the second-most populous county in the US. Chicago is the county seat.

The area was a farming community when the Congregational Church of Flagg Creek was organized in 1843. The cemetery, next to the church was established in 1848 and the post office changed its name from Flag Creek to Lyonsville in 1850.

Lyonsville's sanctuary was erected in 1858 and stood until a new one replaced in in 1960.

The area remained open farmland and even the famous comedians, the Marx Brothers had a chicken farm in the area in 1917, to avoid being drafted during World War I.

When Route 66 was created in 1926, this area was an open countryside with fields located to the north of the Des Plaines River. In 1939 the WPA described it as follows: "Lyonsville marks the eastern limit of the flat lake plain of ancient Lake Chicago, the forerunner of Lake Michigan. Westward lies the faintly rolling, wooded Valparaiso Moraine, one of the long crescent ridges of debris left by the glaciers".

This river is 133 miles (214 km) long, running from the SW of Wisconsin past Chicago and then westwards, forming the Illinois River at its confluence with the Kankakee River. Its waters end up in the Mississippi River.

An ancient native route it was named by the French explorers as the "River of the Plane Trees" after the American sycamore and the red maple both, which are similar to the French plane tree.

The suburban sprawl that followed the post World War II period began expanding west and the area was developed during the housing boom during that period (1947 and 1950s).

A bedroom community for neighboring Chicago, it finally incorporated as the City of Countryside in 1960. Shortly after, the I-55 Freeway was completed.

Named for the countryside with farms, fields and forests, previously Lyonsville after the township created in 1850: "Lyons Township".

Countryside: Hotels and Motels nearby

> > Book your hotel in Countryside

>> See the RV campground nearby in Joliet

The climate of Countryside is a humid continental one with all four seasons distinctly represented; summers are hot and humid, spring is wet and cool, fall is mild and pleasant while winters are quite cold.

Snowfall: on average, 28 inches (71 cm) of snow falls each year. The first snow falls in Nov. and the last (less than 1⁄4 inch or 8 mm) falls in April. There is usually no snow between May and September.

The region around Countryside experiences about 4 tornados per year.

How to get to Countryside?

Map of Route 66 through Countryside in Illinois

See the alignment of US 66 in this location on our Illinois Route 66 Map, it has the complete alignment across the state with all the towns along it.

Below you will find More information on Route 66 in Countryside.

What to see in Countryside

US 66 in Countryside: historic context

As its name implies, this was an area of open fields and, during the "classic" days of Route 66 from 1926 to the early 1960s, this was open farmland. And that is why Jack Rittenhouse does not mention it in his iconic "Guide Book to Highway 66" published in 1946. For the same reason, the WPA guide to the state of Illinois published in 1939, describes the towns along Route 66 east of Chicago up to Lyons. West of Lyons, the WPA mentions the quarry (in modern McCook): "Bordering the highway... is a tremendous limestone quarry. From a distance the narrow-gauge trains seem like children's toys scooting about the quarry floor...", it mentions the junction with US 45 but the only point of interest mentioned in what is now Countryside is the Lyonsville Church at the junction of US 66 and Wolf Rd.: "is reputedly one of the oldest Congregational Churches in northern Illinois. It served as a recruiting station during the Civil War...".

Drive along Historic Route 66 from McCook westwards towards Countryside, there is a one-mile section of Joliet Road (Route 66) was closed about 2001 by the Illinois D.O.T. when the road buckled and split, hindering the safety of those driving along it. The cause was the digging in the quarry mentioned by the WPA (operated by Vulcan Materials Company, the second largest mining company and producer of aggregate in the world), which dug so deep on both sides of the highway, that they undermined its rock foundations.

For this reason you will drive west out of McCook along 55th street into Countryside and take a sharp 90° turn south along East Ave, to return to Historic Route 66 four blocks further south. The Mother Road has a NE-SW course and crosses US 45 just north of the Theodore Stone Park and the Arie Crown Forest Preserve:

The Theodore Stone Forest Preserve is a142-acre forest preserve, with its unique dolomite prairie, oak savanna and woodland. Next to it, across US 45 is the the heavily wooded 250-acre Arie Crown Forest Preserve.

Route 66 then reaches the site of the former Wishing Well Motel:

It was located on the northeastern corner of Joliet Road at Brainard Ave,, built in 1941 it was run by Zora Vidas and her husband until it closed in 2006. It was knocked down as it became a fire risk and many vagrants lived in it.

It had 10 cabins which later became one unified building with 19 units. There was a stone well here in the hotel's front yard.

The old neon sign and the stone well were saved from the demolition and have been placed in the Route 66 Hall of Fame Museum in Pontiac Illinois where they are on exhibition.

Below is a "Then and Now" sequence of the Wishing Well's neon sign: 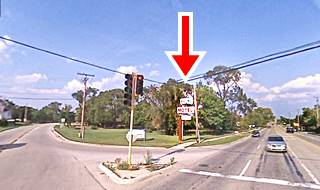 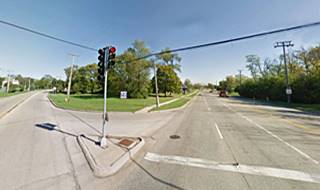 This is another view of the magnificent Neon Sign:

Keep west and at Wolf Road, where Countryside city limits mark the border with Indian Head Park. Just ahead it passes under I-294, and merges into I-55, which overlies most of the original roadbed west of this point.

Here on Wolf Road is the old cemetery and church:

On the SE side of the junction, this is the oldest Congregational Church in Cook County, dating back to 1843. The current building was built in 1960. Don't miss the adjacent Lyonsville Cemetery was organized in 1848; (see the cemetery)

This is the end of your drive through Countryside you can head south (west) along I-55 into Willowbrook.

State Hwy. 4 ran along Joliet Road through Lyonsville in the early 1920s. It became part of Route 66 when it was created in 1926 (Pale Blue in the map above). West of what is now Countryside it turned southwards and passed through Romeoville, Joliet, Wilmington and Elwood.

The old alignment in this section not covered by the freeway has survived in some places (at Dell's Chicken Basket for instance, in Willowbrook) and it is shown in Blue.

The 1928 Illinois State Roadmap shows no urbanization along US66 heading north into Chicago east of Joliet (which overlapped State Highway 4 and US "T"45) all the way into Lyons, the first town on the alignment. To the north lay Hinsdale and Lagrange, but the first town was Lyons, followed by Berwyn, Cicero and Chicago.

By 1945 (according to the Illinois state's official Highway map), things had changed, not oly had US 66 moved to a new alignment through Plainfield, now "Romeo" (yes, not "Romeoville") appeared on ALT 66 north of Lockport on the former 1926-1939 US 66 through Joliet. The urban sprawl reached Lyons, which appeared next to Berwyn and Cicero. To the west no other towns until Plainfield.

The 1954 map shows the same picture but now US 66 from Berwyn to IL-53 and then south as ALT 66 through Joliet and all the way to Wilmington was a "Four Lane Pavement" the main US 66 west of this point, through Plainfield and Braidwood was merely a "Two Lane Pavement".

The state highway map of 1959 shows changes: US 66 south of its fork with ALT 66 is now an "Expressway" with "highway separation" (overpasses and limited access). It has also bypassed Plainfield, leaving the old 1940-58 US 66 aligmnent to become IL-126 and IL-59.

During the 60's, the urban sprawl from Hinsdale is growing south along I-294. The 1969 state highway map (pictured below) has I-55 and US-66 running together until the exchange with I-294, where they split, I-55 running further south and US-66 north.

Countryside is located where US 45 meets US 66 south of Brookfield and Western Springs in the upper central part of the following map:

Drive from Countryside to Willowbrook on Route 66

A short 3.7 mile drive from Countryside to Willowbrook this is the Map with directions.

> > See the next segment Willowbrook to Plainfield or Joliet (west)