McCook has a 1929 grill, the Steak N Egger, former Snuffy’s, an imitation of the Fabulous Las Vegas Sign: Fabulous McCook neon sign and the Skyline Motel. Don't miss the Closed Section of Route 66.

The Main Alignment of Route 66 in McCook

The village of McCook is a Chicago suburb located in Cook County, Illinois, see this Map of McCook. 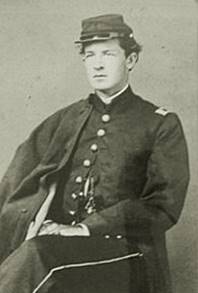 This industrial suburb located between Lyons and Countryside has the lowest population of all the municipalities in Cook County.

The first settlers arrived around 1830. Cook County was established in 1835 and named after Daniel Pope Cook (1794 - 1827) a lawyer and politician as well as newspaper publisher. He was Illinois' first Attorney General, and an anti-slave advocate Congressman.

Cook County is after Los Angeles County, the second-most populous county in the United States. Chicago is the county seat.

It was a farming district, on the road to Joliet and Route 66 was aligned through it in 1926, and that same year McCook incorporated as a village. Industries opened plants in McCook and it the places along Route 66 catered to the blue collar workers (like former Snuffy's -now Steak N Egger) as well as more seedy joints like bars and strip clubs during the 1930s.

In 1939 the WPA described its quarry on the south side of US 66 (to the north was an airfield).

Named for John J. McCook (1845 - 1911), Captain during the Civil War, he later became a director of the Santa Fe Railroad. Close friend of Teddy Roosevelt.

The surname is the Anglicized form of Gaelic Mac Cúg "son of Húg (Hugo)".

Route 66 remained aligned through McCook until its decertification in 1977. In 2001 a short stretch of road was closed due to its foundations being undermined by the quarrying activity next to it.

The river runs just south of the village. It is 133 miles (214 km) long and eventually reaches the Mississippi River via the Illinois River.

It was a native route. The French explorers called it the "River of the Plane Trees" as the trees along it resembled the French plane tree.

McCook: Hotels and Motels nearby

> > Book your hotel in McCook

Find your room in McCook

>> See the RV campground nearby in Joliet

The climate of McCook is classified as humid continental and has clearly marked seasons with hot and often humid summers, cool and wet springs, mild falls and cold winters.

The region around McCook experiences about 4 tornados per year.

How to get to McCook?

Map of Route 66 through McCook, Illinois

See the alignment of US 66 in McCook, on our Illinois Route 66 Map, it has the complete alignment across the state with all the towns along it.

Below you will find More information on Route 66 in McCook.

Some tours in Chicago

What to see in McCook

US 66 in McCook: historic context

The WPA guide to the state of Illinois published in 1939, describes a tour along Route 66 ("Tour 17") and it has an entry for modern McCook, mentioning the quarry, which at that time was only one, on the south side of the highway -the northside was Stinson Airport between US6, East Ave and 55th St., which now is also a quarry. The entry reads: "Bordering the highway... is a tremendous limestone quarry. From a distance the narrow-gauge trains seem like children's toys scooting about the quarry floor...".

Drive along Historic Route 66 from Lyons westwards towards McCook, starting at 47th Street and Route 66. This is the 1929-1976 alignment of Route 66 it crosses an industrial district with manufacturing sites and warehouses.

To your right, ahead is this classic motel which is virtually unchanged (but its neon sign did change) if you compare the 1950s postcard with its present appearance:

At the next corner, ahead at Lawndale Ave., to your right is the course followed by the first Route 66 alignment between 1926 and 1929 through Lyons, it is shown in Orange in the map.

Continue westbound and just 1⁄4 mile ahead, to your right are three Landmarks:

The "Welcome to Fabuolous McCook" neon signe is inspired by the famous Welcome to Fabulous Las Vegas sign. They are very similar (the one in Illinois is crowned by a US 66 shield).

It is a good

The original landmark was designed by Betty Willis and built by Western Neon in 1959 for a local salesman Ted Rogich who then sold it to Clark County.

The sign is 25 feet tall (7.6 m) and is a typical example of space ⁄ nuclear age Googie architecture style.

Just ahead, also to your right is the Former Snuffy's restaurant:

Snuffy's Grill opened in 1929 to cater to the local industrial plant workers and also the truckers driving along Route 66. It is said to have had gambling rooms in the back. It was purchased in 2012 by a Chicagoland-based restaurant group that has preserved the limestone building built in 1929 and have decorated its interior with 1950s vintage decor. Below is the now gone Snuffy's neon sign and a view of this classic diner: 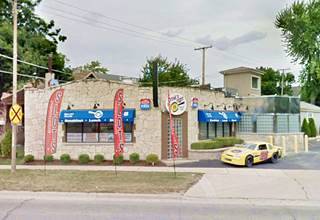 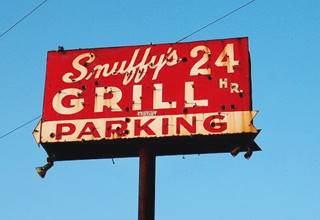 On then next corner (NE side of Egander Ave and Route 66) is an old box-shaped gas station at a strategic corner location close to IL-171, with two garages and office. No canopy or sign of pumps now. It is a repair shop. See this Street View.

The Old Route 66 highway passes under IL-171, curving softly, continuing through an industrial neighborhood. Ahead after the overpass across the railroad tracks to your left is the vast quarry of Vulcan Materials Company, and just ahead Route 66 has been closed. You will have to take the fork on the right along 55th Street as a detour. 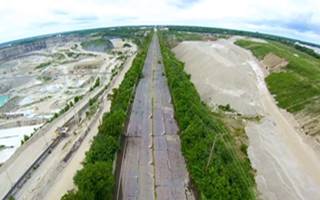 Aerial view, thumbnail from the "Route 66 Off Limits" video by Roamin' Rich

In 1998 a one-mile section of the highway buckled and broke. This disrupted traffic so the road was closed and traffic re-routed along a detour (55th St. and East Ave.)

The quarry located on both sides of the highway operated by Vulcan Materials Co. (the second largest mining company and producer of aggregate in the world), had undermined the bedrock foundations of Route 66.

The road ended up located on a narrow strip of limestone, resembling a long ridge, with sheer drops on both sides into the depths of the quarries. Definitively closed as it was too dangerous, the Illinois DOT filed a suit against Vulcan that same year stating that Vulco had mined limestone too close to the highway, damaging it. The lawsuit waas settled by Vulcan by paying $40 million to the state of Illinois, though they didn't admit any liability.

Below are two views one on the northern tip of the closed US 66, the other at the southern one: 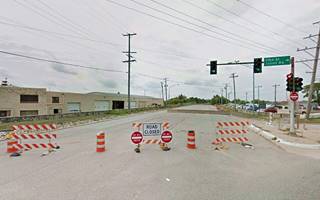 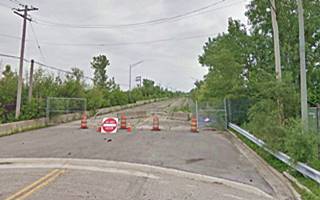 Ahead, along the detour around the quarry, to the right on 55th Street is the enormous Diesel Locomotive Plant (formerly "Electro-Motive Diesel"):

GE built the plant in 1935 to manufacture diesel locomotives. In 2005 it sold it to a group of investors who formed the Electro-Motive Divison (EMD), in turn sold to Caterpillar as Progress Rail.

The plant produced over 50,000 diesel-electric locomotives selling them in more than 100 countries.

At East Ave. take a left heading south, skirting the quarry and once you reach Historic Route 66, turn right into Countryside. This is the end of your drive through McCook you can continue your journey by heading south (west) Countryside.

State Hwy. 4 ran along Joliet Road through Lyons into McCook in the early 1920s; it was paved and then formed part of Route 66 after it was created in 1926. In 1929 it was realigned through Lyons (see the Orange line in the map above).

The 1929-1977 highway is marked with the Pale Blue line in the map above. Further to the west of McCook US 66 turned south and passed through Romeoville, Joliet, Wilmington and Elwood.

During the late 1950s and early 1960s I-55 was completed in Chicagoland and the new freeway was used by US 66 until its decertification in 1977.

The original alignment west of McCook which was not covered by the freeway (at Dell's Chicken Basket for instance, in Willowbrook) is shown in Blue in the map.

The gap caused by the quarry section closure is not marked on the map but you can clearly see it between East Ave and Route 66 at 55th St.

Below is a 1934 map of the highway in the area around McCook:

The 1928 Illinois State Roadmap shows no urbanization along US66 heading north into Chicago east of Joliet (which overlapped State Highway 4 and US "T"45) all the way into Lyons, the first town on the alignment. To the north lay Hinsdale and Lagrange, but the first town was Lyons, followed by Berwyn, Cicero and Chicago.

By 1945 (according to the Illinois state's official Highway map), things had changed, not oly had US 66 moved to a new alignment through Plainfield, now "Romeo" (yes, not "Romeoville") appeared on ALT 66 north of Lockport on the former 1926-1939 US 66 through Joliet. The urban sprawl reached Lyons, which appeared next to Berwyn and Cicero. To the west no other towns until Plainfield.

The 1954 map shows the same picture but now US 66 from Berwyn to IL-53 and then south as ALT 66 through Joliet and all the way to Wilmington was a "Four Lane Pavement" the main US 66 west of this point, through Plainfield and Braidwood was merely a "Two Lane Pavement".

There are changes in the 1959 state highway map: US-66 south (west) of its junction with ALT US 66 has become an "Expressway" with "highway separation" (overpasses and limited access). This freeway bypassed Plainfield and the former 1940 to 1958 US-66 road became state higways 126 and 59.

During the 1960's, the suburbs expanded and the 1969 state highway map (see image below) now shows I-55 and US 66 running together eastwards all the way to the exchange with I-294. Splitting here: with I-55 taking a more southern course and US-66 a northern one.

McCook is located where US 45 meets US 66 south of Brookfield and Western Springs in the upper central part of the following map:

Drive from McCook to Willowbrook on Route 66

Drive 3 miles from McCook to Willowbrook; see this Map with directions.

> > See the next segment Countryside to Willowbrook (west)