Elwood is a village on the 1926-39 US 66 and the later Route 66's ALT alignment. Here was the Joliet Army Ammunition Plant which now has become the Abraham Lincoln National Cemetery and the Midewin National Tallgrass Prairie.
Visit the Munition Plant workers monument and the Route 66 Wayside Exhibit (Rosie the Riveter), drive on an original Route 66 pavement too.

The Main Alignment of Route 66 near Elwood

Elwood is a village in Will County located on Route 66, see this Map of Elwood.

The area has been inhabited for at least 11,000 years. The French explored the ara in the mid 1600s, and in 1673, Louis Jolliet and the Jesuit Missionary Father Jacques Marquette paddled up the Des Plaines River (just west of Elwood) and reached Lake Michigan.

After being part of Britain (after the "Seven Year War") it became a part of the US after its independence. The territory became the state of Illinois in 1818.

The place had been known as Reed's Wood, after the first settler, Charles Reed and his family. Will County was created in 1836 and named for Dr. Conrad Will, a member of the first Illinois Constitutional Convention and member of the Illinois Legislature.

The post office opened in 1846 as Reed's Wood, and when the Chicago & Alton Railroad passed by in 1854, a station was built and a village was platted.

The village was renamed Elwood in 1855, and it incorporated as a village in 1869.

It was a farming community until 1940 when the Arsenal was built here, alongside Route 66 which had been aligned through Elwood in 1926. It became a four lane highway renamed ALT 66 north, into Joliet. A new road was built to the west, from Plainfield to Gardner, to carry the increased wartime traffic; it became the Main US 66.

It was named for N.C. Elwood, mayor of Joliet in the 1850s. The surname is a "locational" one, identifying people who lived in Ellwood, Gloucestershire (from "the elder wood" in Old English).

Elwood: Hotels and Motels nearby

> > Book your hotel in neighboring Joliet

>> See the RV campground nearby, in Braidwood

The climate of Elwood is a humid continental one with all four seasons distinctly represented; summers are hot and humid, spring is wet and cool, autumn is mild and pleasant while winters are quite cold.

Snowfall: on average, 28 inches (71 cm) of snow falls each year in Elwood. The first snow falls in Nov. and the last (less than 1⁄4 inch or 8 mm) falls in April. There is usually no snow between May and September.

A tornado touched down 3 miles north of Elwood on May 8, 1988, it damaged a few homes and uprooted some large trees but nobody was hurt.

The area that surrounds Elwood gets some 4 tornado strikes every year.

How to get to Elwood?

Map of Route 66 through Elwood Illinois

The highway from Joliet to Wilmington, including Elwood is Listed in the National Register of Historic Places. Below you will find More information on Route 66 in Elwood.

What to see in Elwood

US 66 in Elwood: historic context

In 1946 Jack DeVere Rittenhouse does not mention it in his 1946 "Guide Book to Highway 66" because he drove down the Main US 66 built after 1940, he does mention the other "ALT" alignment through Joliet. He also says, after crossing the Des Plaines River: "...for the next four miles you pass the site of the Kankakee Plant of the Joliet Arsenal, active during World War II...".

In its Guide to Illinois published in 1939, the WAP tells us that "Elwood... serves as a countryside that has witnessed a notable experiment in farm rehabilitation..." describing how Arthur States manger of the Wharton estate improved farming techniques in 1924 which allowed 10 out of 12 tenants to buy their farms with their improved incomes.

Drive along Route 66 in Elwood

Begin your tour at then north side of town driving from Joliet, you have two options:

1. You can drive the four lane 1930-40 alignment, which originally had 2 lanes and was widened to four lanes to carry the wartime traffic to and from the Arsenal in 1940 -and became ALT 66 that same year.

2. Drive the 1926-30 alignment that winds its way into town and is shown in Orange in the map above.

The 15.9 mile road segment is currently Illinois Route 53. The original road becamea a limited access four-lane divided highway to carry wartime traffic and was built between 1942 and 1945. It had a 24-foot wide roadbed which was 10-inch thick.

In either case you will end up in Elwood. Once you reach the town, the later alignment cuts across the earlier one, so you will have to cross it and enter Elwood along E Mississippi Ave. There are no remains of any original gas stations or buildings, but there is an interesting Wayside Exhibit ahead: 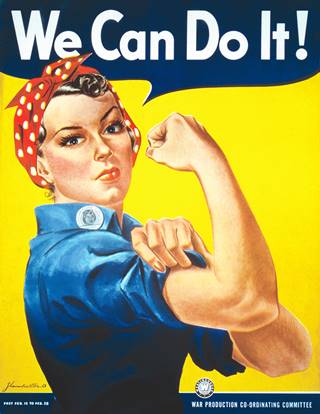 The steel sheet silhouette at Elwood represents Rosie the Riveter:

She is a symbol of all the women who worked at factories during WWII, manufacturing goods while the men fought the war. They represent American women, their economic power and feminism.

Here she is the symbol of Elwood Arsenal, which employed thousands of women.

The marker tells us about Elwood Arsenal and the role of civilians -especially women- during the war (and Route 66 which served as a corridor for labor and shipments of raw materials and ammo).

This original pavement was buried under later layers of asphalt and has been brought back to the surface after a renovation project.

Drive south along Douglas St. and then turn right towards Wilmington, just half a mile ahead on Hoff Road is the site of the former Arsenal, now a Natural Reserve (Midewin National Tallgrass Prairie). To your left is the Abraham Lincoln National Cemetery:

Also known as the Joliet Arsenal, it opened during World War II to manufacture explosives and shell; it eventually produced 1 billion pounds of TNT.

It was a vast complex which consisted of the Elwood Ordnance Plant (EOP) and the Kankakee Ordnance Works (KNK). Both merged into one (Joliet Arsenal) in 1945 and remained active until 1976. 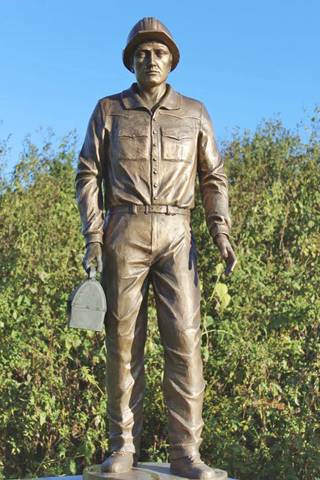 On June 5, 1942, as World War II was at its lowest point for the Allies, there was an explosion involving anti-tank mines at the Joliet Army Ammunitions Plant. It killed 48 people and wounded 46.

This was the worst accident (in life loss) at a munitions plant during WWII, and it took place in building 10 at the Elwood Ordnance Plant

It supplied munitions during WWII and also the Korean and Vietnam Wars. It ceased production in 1976 and shut definitively in the 1990s. Parts of its vast surface were contaminated.

The land was ceded to the U.S. Forest Service for restoration, which led to the creation of the Midewin National Tallgrass Prairie, another 910 acres were given to o the U.S. Department of Veterans Affairs for the national cemetery.

A statue of a munitions plant worker was dedicated to these heroes in 2001, it was placed by the entrance to the Abraham Lincoln National Cemetery.

The statue was stolen in 2005. But funds were provided by an anonymous donor so another statue was made and placed at the cemetery in 2008. The original one was found that same year in Braceville and now belongs to Elwood.

The law that created the 19,000 acre Midewin National Tallgrass Prairie also established the Abraham Lincoln National Cemetery, it was the largest national cemetery in the country for a short period of time until another national cemetery expanded its surface to be able to retain the #1 position.

It was named after Lincoln, who in 1862 signed into law the creation of National Cemeteries for the soldiers who gave their lives in the service of the country.

This is the only federal tallgrass prairie reserve east of the Mississippi River. It is in the central forest-grasslands transition ecoregion of the temperate grasslands, savannas and shrublands biome.

With the neighboring Des Plaines Fish and Wildlife Area and a other protected areas, it covers 40,000 acres of protected land.

Midewin is a Potawatomi word for "healing", and it is a good name for the reserve.

The original prairie that once existed here was replaced by human activity: the bison were exterminated and cattle introduced to graze on the native grass. Then corn, wheat and soybeans were planted by the settlers.

In 1940 this changed when the US government built the munitions complex: the farmers were forced to sell their land and the Arsenal occupied it.

But you don't make 1 billion pounds of TNT without contamination: and the area where the Arsenal once stood had plenty of heavy metal contamination (lead, arsenic) and polychlorinated biphenyls (PCBs) plus some unexploded ordnance.

The site was cleaned up and remedied by 2008 (280,000 tons of contaminated soil were bioremediated) and ground water monitoring is ongoing.

Twenty seven American bison were introduced in 2015 to graze (they will eat introduced species and allow the native ones to gain a foothold in the area).

This is The end of your tour in Elwood, head south into Wilmington and visit the Gemini Giant.

To create better roads, the state of Illinois issued a bond in 1918. One of the highways built with it was known as SBI 4 (State Bond Issue #4). It linked Chicago with St. Louis and passed through Elwood, Joliet and then northeast through Lockport and Lemont into Lyons.

It was paved completely by 1923 but in 1926 a new road was built north of Joliet through Romeoville which became Route 4, (the former alignment became State Hwy. 4A).

That same year, Route 66 was created and aligned along Route 4's roadbed.

The first alignment into Elwood was rather winding (see this Map with directions), which is marked with an Orange line in the Google map above. It entered town via S Chicago Rd., Mississippi Ave and then left along Douglas St. 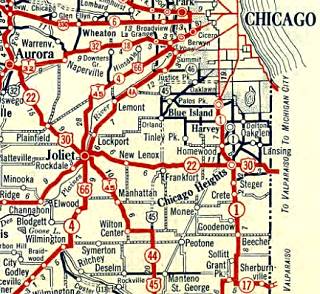 The 1928 Illinois state roadmap shows the original US 66 and the other highways in the region (IL-4 and Il-4A), it also marks Elwood beneath Joliet (left of center).

It was straightened out as it approached Elwood, making it shorter and also safer (less curves).

As the truck traffic grew during the war the road between Elwood and Joliet was widened to four lanes, at the same time another straighter alignment built to the west, through Plainfield this one was named US 66, leaving the older alignment to become ALT 66.

This ALT 66 alignment ran south from Romeoville through Joliet, Elwood, Wilmington, Braidwood, Godley and Braceville, meeting the Main 66 at Gardner. The Pale Blue line marks these 1926-39 US 66 and 1940-77 ALT 66 alignments.

The newer alignment was built between Gardner and Plainfield and then NE towards the old US 66 alignment, which it met north of Romeoville.

The new "MAIN" US 66 is marked with a Green Line in the google map above.

In 1958 US 66 was moved east west to a brand new freeway that now bypassed all the towns including Plainfield, Braidwood and Gardner. US 66 and I-55 shared the freeway until 1977.

The American Association of State Highway and Transportation Officials (AASHTO) created the "Alternate" designation in 1959, to designate a route that split from the main alignmen and re-connected again with it after passing through certain towns.

If the Main and the Alternate highways had a similar course, the shorter and better built road became the "main" one, and the other was the "alternate".

In 1940 Route 66 north (east) of Elwood, all the way to present Wellco Corners had been designated as ALT 66.

And the Main Route 66 took a straighter course from Braidwood through Plainfield.

Drive from Joliet to Elwood

Drive 9 miles from Joliet to Elwood: Map with directions.

> > See the next segment Elwood to Wilmington (west)