Laguna Pueblo, a historical landmark from 1699, Laguna Pueblo and its Saint Joseph Church are listed in the National Register of Historic Places. Take a side trip to nearby Seboyeta and drive the original Route 66 alignment's Dead Man's Curve.

The town of Laguna (pronounced "Lah-goon-ah") and Laguna Pueblo are in Cibola County, and form part of the Laguna Reservation. See a Map of Laguna.

The Lakes at Laguna

Paguate Lake is about 4 mi. NE of the Pueblo of Laguna mission square, but is a reservoir. The old lake that gave the name to the town was a wetland next to the town, to the west, which held geese, duck and other waterfowl. South of New Laguna is a temporary lake which forms when the San Jose River floods.

The original name was "Arroyo del Rito" (Brook of the Spring), and also Rio Cubero (after the Spanish Governor, Cubero in the 1690s).

Later it adopted the name San Jose (St. Joseph), probably due to the image of that saint that the King of Spain gave to the Acoma Pueblo people in 1629. Interestingly, in those days nearby San Fidel was named San Jose.

The archaeological site of Sandia Cave indicates that this part of New Mexico has been inhabited for over ten thousand years. In more recent times, the Native American Pueblo people have lived in the valleys of the rivers that flow from the Rocky Mountains into the Rio Grande Basin such as the San Jose River. They used the water to irrigate their crops of maize, squash and beans.

The native name of the town is "Tó Láni" which means "Much Water". They name themselves as Ka'waika or Kawaik people.

The Keresan natives lived in Mesa Verde, in the southwest of Colorado, but a dry period (the Great Drought) forced them to migrate south around 1300 AD. They settled along the San Jose River and at Puagana on the south shore of Laguna Lake. They gradually occupied the area of Old Laguna. The Keresan people also occupied Acoma which very close, to the south of the river.

Entrance to Laguna on the old US66

"Laguna" is a Spanish word that means "Lagoon" and refers to the lake now mostly dry that was located beside the Pueblo.

After subduing the native uprising, Governor Cubero settled the refugees of the Kwaik people and some others from the pueblos of Cochiti, Zia, Cienaguilla and Santo Domingo. He built the new Pueblo in 1699 on the remains of an ancient Native village. He named it San Jose de a Laguna. (St. Joeph of the Lake), and this shortened to "Laguna". He chose a spot on the sandstone buff on the north side of the San Jose River. It is therefore one of the newest pueblos in the state.

The territory passed on to Mexico in 1821 when the former colony won its independence but, in 1848 it became a U.S. Territory when Mexico ceded it after its defeat in the Mexican - American War (1846-48).

In the 1880s the Atchison, Topeka and Santa Fe Railroad reached the area and extended its tracks from Albuquerque towards Gallup. And it built the Laguna station one mile north of the Indian Pueblo. The accessibility by rail brought tourists interested in the Native cultures of the Southwest.

In 1926, Route 66 was aligned along the "Old National Trails" which linked Gallup, Grants and Laguna with Los Lunas and Albuquerque. It remained on the alignment and even today the old US 66 can be driven throgh the town. Interstate 40 was built just to the south of the River and you can access the town from it at Exit 114.

There is lodging along Route 66 in Laguna:

> > Book your Hotels in Albuquerque very close to Laguna. or Acomita Pueblo or Grants

Lodging Near Laguna along Route 66

Book your hotel close to Laguna, in Albuquerque

>> There are RV campgrounds near Laguna (at Acomita)

The weather in Laguna

Rainfall is 10.5 inches (292 mm) per year on average and most rain (6 in. - 152 mm) falls from July to the end of Oct. during the "Monsoon" period. Snowfall averages 18 inches and falls between November and March.

The tornado risk in Laguna is nil: Cibola County has no Tornado watches. The area west of this point has no tornado events at all.

To the east, beyond Albuquerque are the towns of Tijeras and Santa Rosa.

Check out Laguna on our Route 66 Map of New Mexico, with the complete alignment and all the towns along it.

Map with the alignment of Route 66 through Laguna

Laguna Pueblo is a Native pueblo dating back to 1699. Stop to see the townsite and the historical church. Drive the original Route 66 alignment and "Dead Man's Curve". Visit nearby Cebolleta and Acoma Pueblo.

The adobe pueblo with its old church was built in 1699. A historic and traditional colonial Pueblo village.

The pueblo spans 108 acres (44 ha.) and has many adobe homes which are private (see Etiquette below). And its southeastern section was part of the original Pre-Columbian town from the 1400s.

View of Laguna Pueblo from the south. The arrow marks the Ancient Mission Church.

See a photo of the Church above.

The whitewashed San Jose Mission Church was erected in 1701. It is the tallest building of the pueblo and is the center of the religious festivities of the village.

September 19th is the "Fiesta de San Jose", the "Feast of Saint Joseph", which includes dancing and stalls that sell arts and crafts in the square next to the church.

Feast days are the best to visit the small villages around Laguna Pueblo:

After the 1937 realignment of Route 66,the pueblos at Pecos, Santo Domingo, Sandia and Isleta were bypassed and Laguna remained the only Pueblo that could be driven past and was visible from the highway.

The People, the Reservation

The Laguna Pueblo is the largest of the Keresan-speaking Pueblo people; with around 8,000 members. The reservation consists of 500,000 acres of land spanning the counties of Sandoval, Valencia, Bernalillo and Cibola.

Visit the Casa Blanca Commercial Center with typical handicrafts of the Laguna people such as pottery with geometric designs in yellow, orange and red colors.

The annual feast of Saint Joseph which takes place on March 19th and again on Sep. 19th. includes not only celebrations and dancing but also sporting events.

For more information on the Laguna people, visit their website: www.lagunaPueblo.org

The village of New Laguna is located 2.5 miles west of the Old Pueblo along Route 66. 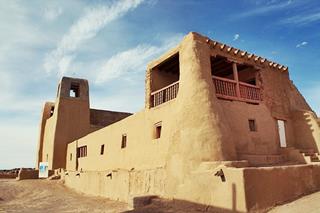 Acoma Pueblo is 18.7 mi. towards the southwest. See this Map with directions.

2.6 mi. east of Laguna along Old Route 66, heading towards Mesita.

The original alignment of Route 66 followed the ancient native trail that went next to the winding course of San Jose River towards Laguna.

The narrow canyon of the river is closed in by red colored sandstone bluffs, and the road runs between the cliff and the river. There are great views of the red sandstone rocks on the sheer walls of the mesa.

At the northern tip of the mesa the river curves sharply around it, and so does the old Route 66. It takes a long curve around switching its south-to-north direction for an east-to-west one, and does so by following a circular curve as can be seen in the image above.

A much cheaper option than cutting through the sandstone. But, as the curve's name shows, a not very safe option for unwary drivers. 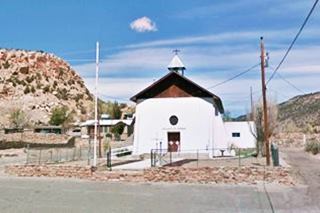 A Side Trip to Seboyeta

Seboyeta was the first village founded west of the Rio Grande in 1800. The founding families marched west from Albuquerque to the "Cebolleta" land grant, named after the canyon on the southeastern slope of Mount Taylor (Sierra de San Mateo).

Visit the Church of Nuestra Señora de Los Dolores (Our Lady of Sorrows) built in 1829 and the cave and spring at Portales where there is a shrine of Our Lady of Lourdes.

The Old alignment of Route 66 near Laguna

From Suwanee through Mesita to Laguna

> > See the previous segment Through Albuquerque.

> > See the next segment Laguna to McCartys.

See the Parks in Albuquerque and closer, El Malpais National Monument and Cibola National Forest Mount Taylor District which are close by.