Mesita a small village in the Laguna Reservation, next to Route 66 and its two landmarks: the Owl Rock and the Dead Man's Curve.

Mesita is a small village located on Route 66 in Cibola county, NM. Map of Mesita

Owl Rock next to Route 66 in Mesita, NM

The archaeological site of Sandia Cave shows that New Mexico has been inhabited for the last ten thousand years. In more recent times, the Native American people have lived in the valleys of the rivers that flow from the Rocky Mountains into the Rio Grande Basin, using the water to irrigate their crops of maize, squash and beans.

The nearby Indian pueblo of Laguna was established in 1697. In 1821, after Mexico gained its independence from Spain it took possession of New Mexico, but ceded it to the U.S. after being defeated in the Mexican - American War (1846-48).

Mesita was established on the south bank of the San Jose River (also known as Cubero River), a tributary of the Rio Puerco in the 1870s by a faction that split from the Laguna Pueblo people.

The split was due to the growth of Protestant Christianity in the area after the arrival of the Baptists in 1850 and the Presbyterians in the 1870s.

In the 1880s the Atchison, Topeka and Santa Fe Railroad reached the area and extended its tracks from Albuquerque towards Gallup. Its station was named "El Rito".

Origin of the name Mesita

The word is Spanish and means "Small Mesa". A "Mesa" is a plateau (the word means "Table" in Spanish).

Rito is a colloquial Spanish word used in New Mexico as a short form for "tiny river" (riito), and basically means "Sping" don't confuse with the correct meaning for rito whic is "rite" (as in ceremony).

The San Jose River was once known as "Arroyo del Rito" or "Spring Stream". And the ranch at El Rito was known as "El Riito del Pino" (Spring of the pine tree).

In 1926, Route 66 was aligned along the "Old National Trails" which linked Gallup, Laguna and Mesita with Los Lunas and Albuquerque. It remained on the alignment and even today the old US 66 can be driven throgh the town. Interstate 40 was built just to the west of Route 66 and you can access the town from Exit 117.

To the east of Mesita is the San Jose River and behind the river rises the Mesa Gigante.

There is lodging along Route 66 in Mesita:

> > Book your Hotels close to town in
Albuquerque
Or Acoma Pueblo

Lodging Near Mesita along Route 66

Book your hotel nearby in Albuquerque

>> There are RV campgrounds near Mesita.

The weather in Mesita

Mesita is located just west of the Rio Grande Valley. Its climate is dry and sunny (278 sunny days per year) with a low relative humidity. There are large swings between day and night temperatures, even in summer.

Summers are hot and winters are cold. Rainfall falls mostly during the summer monsoon season (July through September), and adds up to about 11 in. per year (279 mm). Snowfall is quite low: around 10 inches (25 cm) per year.

The tornado risk in Mesita is nil: Cibola County has no Tornado watches. The area west of this point has no tornado events.

To the east, beyond Albuquerque are the towns of Tijeras, Edgewood and Santa Rosa.

See the alignment of US 66 in Mesita, on our New Mexico's Route 66 Map, it has the complete alignment across the state with all the towns along it.

Mesita is a small village in Laguna Reservation, on the original Route 66 alignment. Visit its Dead Man's Curve and Owl Rock.

Don't miss the date: August 15 is the Mesita Village Feast.

A rock formation on the eastern side of the road (right side heading from Mesita towards Laguna), that actually looks like an... owl. 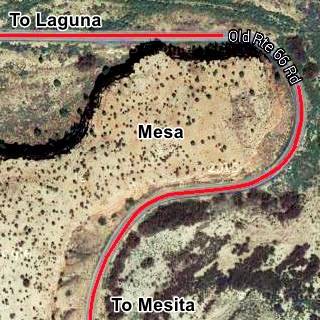 Satellite View of the Dead Man's Curve at Mesita.

It has been portrayed on classic Route 66 post cards for decades and, surprisingly has not been removed.

See Photo of the rock above.

The narrow canyon of the river is closed in by red colored sandstone bluffs, and the road runs between the cliff and the river. There are great views of the red sandstone rocks on the sheer walls of the mesa.

At the northern tip of the mesa the river curves sharply around it, and so does the old Route 66. It takes a long curve around switching its south-to-north direction for an east-to-west one, and does so by following a circular curve as can be seen in the image above.

A much cheaper option than cutting through the sandstone. But, as the curve's name shows, a not very safe option for unwary drivers.

The Old alignment of Route 66 near Mesita

Route 66 From Albuquerque to Suwanee

From Suwanee through Mesita to Laguna

The image below shows the original road west of Suwanee towards Mesita (we saw a roadrunner here!), it is cracked and needs some repair, but driveable.

The original alignment of Route 66 followed the ancient native trail that went next to the winding course of San Jose River towards Laguna.

> > See the previous segment Through Albuquerque.

> > See the next segment Laguna to McCartys.

See the Parks in Albuquerque which are close by.