Paraje is the eastern gateway to Acoma Pueblo from Route 66: an ancient Pueblo known as the Sky City which is built on the top of a mesa; has the historic San Esteban del Rey Mission Church and nearby, Mesa Encantada.

Paraje is a village in Cibola County, on Route 66. Map of Paraje.

The archaeological site of Sandia Cave indicates that this part of New Mexico has been inhabited for over ten thousand years. In more recent times, the Native American Pueblo people have lived in the valleys of the rivers that flow from the Rocky Mountains into the Rio Grande Basin such as the San Jose River. They used the water to irrigate their crops of maize, squash and beans.

In the 1880s the Atchison, Topeka and Santa Fe Railroad reached the area and extended its tracks from Albuquerque towards Gallup. They built a station at the small town of Paraje and named it Cubero although it was almost 8 miles from the village of Cubero. The site where Paraje was built had been in the past a pueblo of the San Felipe Indians who later migrated and moved to a place near Santo Domingo Pueblo, near Santa Fe.

The village was built within the land of the Laguna Pueblo. To the south is Casa Blanca, a small community that forms part of the village.

In 1926, Route 66 was aligned along the "Old National Trails" which linked Gallup, Grants and Paraje with Los Lunas and Albuquerque. It remained on the alignment and even today the old US 66 can be driven throgh the town.

There is lodging along Route 66 in Paraje:

> > Book your Hotels in:
Albuquerque, Acomita Pueblo or Grants

Lodging Near Paraje along Route 66

>> There are RV campgrounds near Paraje, at Acomita.

The weather in Paraje

The tornado risk in Paraje is nil: Cibola County has no Tornado watches. The area west of this point has no tornado events at all.

The weather in Paraje is arid, sunny (278 sunny days per year) and dry. The arid climate causes cold winters and hot summers.

Rain falls during 53 days each year, adding up to 10.5 inches (292 mm). Most of it (6 in. - 152 mm) falls during the Summer Monsoon between July and October. Snowfall adds up to 18 inches each year and may fall between November and March.

To the east, beyond Albuquerque are the towns of Tijeras and Santa Rosa.

Paraje is a very small village in Laguna Reservation, on the original Route 66 alginment. It is the eastern gateway to the amazing Acoma Pueblo, San Esteban Church and Mesa Encantada.

October 17 is the Paraje Village Feast. On September 19, the village celebrates the Feast of St. Joseph (San Jose). The Seama Village Feast takes place on July 26. Seama is next to Paraje.

To the south is Acoma Pueblo, 23 miles away.

Head west along old Route 66 towards Cubero and just 2 miles from the Paraje, towards the south is a view along the valley where, 10 mi. south as the crow flies, is the Pueblo of Acoma and the Mesa Encantada.

Mount Taylor was named after President Zachary Taylor, and is an extinct volcano towering upon a plateau of lava and sandstone in the Sierra San Mateo. It formed millions of years ago and its elevation is 11,301 ft (3.445 m) and is one of the Navajo sacred mountains.

It is within the Cibola National Forest Mount Taylor District.

Oldest settlement in the USA

Settled in the twelfth century, Acoma Pueblo is believed to be the oldest continuously occupied settlement in the United States.

Acoma, pronounced "Akk-uh-muh" (derived from their name "Haaku", which means "people of the white rock"), is one of the most remakable pueblos in New Mexico. It is built on the top of an isolated mesa named Acucuo, a flat-topped hill with sheer walls, 357 ft. high (109 m) that protected it from its enemies.

The dominated the surrounding areas and were visited by Francisco Vásquez de Coronado's expedition in 1540. They were subdued by the Spanish after a three-day battle in 1599 when Oñate conquered New Mexico for the Spanish Crown.

Its location and the view you have from the hill gave it its name: "Sky City" (This Map shows its location).

The Acoma people are expert makers of pottery with thin walls. You can buy some at the Visitors Center at the base of the mesa (it also has a museum). More information at their website: ww.skycity.com

View of the buildings atop the mesa at Acoma Pueblo

Book your Hotel in
Albuquerque
Acomita Pueblo
or Grants

Listed in the National Register of Historic Places, US National Historic Landmark

The adobe church was built in 1629 a Spanish Colonial Mission church.

The church was built on the mesa inside Acoma Pueblo by the Spanish in 1629. It was the San Esteban Rey Mission church. Named after the Saint King of Hungary, Stephen I. The original adobe building still stands, despite the Pueblo Revolt (1680), and the small ancient cemetery is next to it. 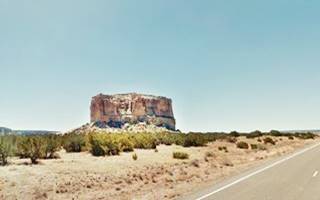 Just before reaching Acoma Pueblo, on the left side of the road is the "Enchanted Mesa", which according to the Acoma myths was their original village named Katzimo.

The Old alignment of Route 66 near Paraje

Route 66 actually curved into the town on its original 1926 alignment and ran along what is now Acorn Rd.

This Map shows that 1926 alignment through Paraje.