Hamel, has a few interesting classic Route 66 sights which we list below:

Hamel is an incorporated village in Madison County in SW Illinois, (Map of Hamel).

For the early history of Madison County, read this.

What is now Hamel, was settled by Ferguson who buitl his log cabin on Chaokia Creek in 1811, he left in 1812. Only in 1817 did some families from Massachusetts settle the area.

More settlers arrived, as farmers, and used one of the "Edwardsville - Staunton Road", later followed by US 66. The school opened in 1825. German migrants arrived in the 1830s and by 1861 had erected a Lutheran church.

Frederick Wolf opened his general store at the crossroads of the Edwardsville - Staunton Rd. and the Alton-Greenville roads in 1865. Later Jack Hamel opened a store and a flower mill (1869).

It was named Hamel's Corner after A. J. "Jack" Hamel, a farmer who owned property in the area.

Accommodation and hotels in Hamel

> > Book your accommodation in Hamel

More Lodging near Hamel along Route 66

More motels and Hotels close to Hamel and Route 66

Hotels to the west, in Illinois

Find your hotel room in Hamel:

>> Check out the RV campground close by in Granite City

The Weather in Hamel

Rainfall his roughly constatn year round and peaks with 4.2 inches in April and May. The minimum is 2 inches (51 mm) in Jan.

You can expect snow, ice and sleet in winter.

Hamel may be hit by some 7 tornados every year.

Map of Route 66 through Hamel, Illinois

See the alignment of US 66 in Hamel, on our Illinois Route 66 Map, it has the complete alignment across the state with all the towns along it.

Below is the color key for Route 66’s alignment in Hamel:
Blue, Green, Gray, Pink, Yellow, Violet show different courses taken by US 66.
Brown is the Bypass US-66.
Orange: the 1926-32 aligment through St. Louis, read below for all the alignments through the city.
Black: missing segments.

Route 66's alignment in Illinois: the Historic Route 66 through Hamel

More information on US 66 in the area of Hamel.

Landmarks and Places to See in Hamel

You can reach Hamel using Historic Route 66 or along the Interstate I-55 or I-70.

Jack Rittenhouse in his famous 1946 "Guidebook to Route 66" described Hamel as follows: "HAMEL (Pop. 160), a small farming community with several implement stores. Hamel Service Co. Garage. No cabins or other except gas".

3 miles west towards Edwardsville was "Green Gables tourist court and gas station" followed 2 miles further west by yet another service station. These have long since vanished. 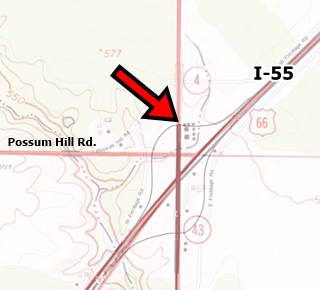 This is the spot (Read more below) where Route 66 split into two separate two-lane alignments in 1953, the one to the west was known as Bypass US 66 or BYP 66, and after passing through Hamel, Edwardsville and Mitchell crossed into Missouri along the Chain of Rocks Bridge to bypass the City of St. Louis along its north and western flanks. The other alignment, to the east, ran due south to Troy, Collinsville and into St. Louis proper. Heading to the southwest to meet BYP 66 and merge into a single highway once again.

The red arrow in the map shows the spot where the old service station figures in the 1954 USGS map, also in red is the old alignment of Route 66 and Possum Rd., the transparency allows you to see present I-55 at the Exit.

Exit 33 is the access to the town of Worden. Here is the old gas station pictured below:

Church of the Neon Cross 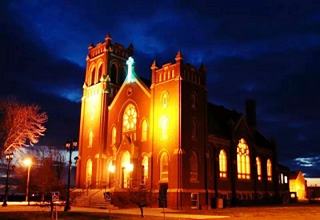 This building was dedicated in 1931 as Saint Paul Lutheran Church. The congregation was established here in 1856 in what was known as New Gehlenbeck.

It gets its name from the neon cross which was placed there in memory of a member of the congregation who died in World War II. See its Street View.

Across the freeway (accessible by the overpass just north of the Church), on the eastern frontage road is the Site of the Meramec Barn sign:

The exact spot is shown in This map.

Meramec Caverns on Route 66, also known as "Missouri's Buried Treasure" is the largest cave West of the Mississippi. It was discovered in 1720 by French explorer Philipp Renault. It became a dance venue in the 1890s but it was not until Lester Dill (1898 - 1980) bought it in 1933 that it became a tourist attraction. Dill already ran Fisher's Cave in Meramec State Park, so Dill renamed it as the "Meramec Caverns".

Dill promoted his tourist attraction in very cunning ways: He paid farmers so that they painted the words "Meramec Caverns" on barn roofs all across the region, 14 states in all (See some surviving barns on Route 66 here: in Conway MO, St. Clair MO, Cayuga IL, and Chandler OK).

One of those barns stood here in Hamel until it was badly damaged by a Tornado in late February 2011. The sign had been restored a few years back and dated to the 1950s, the barn was much older.

This is the "Then and Now" photo sequence, click image for current street view

Head into Hamel, and in the main crossroads of US 66 and State Hwy 140 is a classic Route 66 landmark:

Its name is Weezy's  and is a historic roadhouse that has been catering to Route 66 travelers since the 1930s. It has had many names (Tourist Haven -see photo below, Earnie's Roadhouse, Village Inn are some of them).

It has not changed much over the years and its interior walls have interesting photographs of the bygone days. You can still get a good meal here!

A 1950s view of "Tourist Haven" in Hamel, Illinois

The vintage photograph shows a train of the Illinois Traction (or Illinois Terminal Railroad) which was a heavy duty interurban electric railroad with passenger and freight service. The railway built a small station in Hamel on its Springfield-Granite City line (which ran between 1904 and 1956). 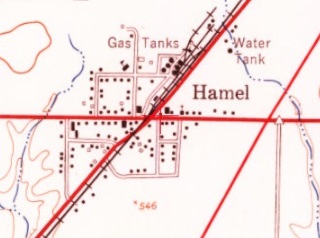 The map shows Hamel in 1954 with the railroad tracks running across US 66 (thick red line on the left) to the far right is the other US 66 alignment heading towards Troy and Collinsville, now part of I-55.

Just west of Weezy's along IL-140. Now a museum, this log cabin was built between 1820 and 1852. It preserves artifacts from that period. Visti by appointment only.

Route 66 passed through Hamel right from the start, since it was created in 1926. It followed current State Hwy. 157 into Edwardsville. Later, as traffic increased a new alignment was needed, this took place in the early 1950s:

The 1954 and 55 USGS maps of the area show more profound changes in the old road.

The main "US 66" and "Bypass 66" (BYP 66) separated much further east than they had done until then. The split took place far to the north of Edwardsville and Mitchell: at the point where modern Exit 33 on I-55 is located, north of Hamel, just east of Worden.

Both alignments gradually separated, BYP-66 (shown in Salmon in the Map above) opening towards the west and US-66 ran further east, as a four-lane highway, which is now under I-55 and is shown in Violet in the map.

In Violet. From present Exit 33, it took a southbound course. At current I-55 Exit 17, it merged with US-40 and both highways US-66 & 40 took a southwestern course (under I-55 today) and just south of Maryville, at Troy Crossing, (present Exit 15B of I-55) both highways turned south (along Vandalia St. - MO-159) heading for Collinsville, which they bypassed by taking a westward course on the town's northern fringe, along Beltline Rd., all of this alignment is a 4-lane highway. Then, at what is modern MO-157 both highways turned south and then took a right, turning west towards St. Louis where modern Collinsville Middle School is now located, at the junction with Collinsville Rd. and St. Louis Rd. The roads then went westwards all the way to its junction with modern MO-203, here it overlapped the previous alignment (in Green) until St. Clair Ave.

At this point the road turned right and then left (once again in Violet) as a 4-lane highway which then split into two to allow traffic to cross the Mississippi River using two bridges: Veterans Memorial Bridge to the north and Eads Bridge to the south; both were toll bridges. Present I-55 has cut off one of those access routes (Black in the map).

Once across the river, in St. Louis, Missouri, the traffic headed west along Washington Ave. and took a SW course out of the city.

> > See the next segment Edwardsville to Mitchell (west)