San Jon, is a small town on the Historic Route 66 in eastern New Mexico (listed in the National Register of Historic Places). Visit the nearby ghost towns of Bard and Endee, the Llano Estacado caprock and Ute Lake State Park.

San Jon is the first town in New Mexico along Route 66 coming from Texas. It is located in Quay county, on the eastern part of the state.

This part of New Mexico is very close to the Clovis site where very old stone tools (over 13,000 years old) have been found, an indication of its very long history.

The area was later explored by the Spanish, who introduced the horse (1500s), the local Querecho Apaches adopted it. By the mid-1800s, Kiowa and Kiowa Apache together with the Comanche dominated the region and fought with the U.S. Army and white settlers until subdued in the mid 1870s.

Soon cattle ranches were established in the region and the railway pushed westwards, reaching San Jon in 1904. The town had been established two years earlier.

It was named by its first postmaster, W. D. Bennet in 1906. Some stores took care of the local ranching community's needs, and got a big boost when Route 66 was aligned through the town in 1926.

It is a rather odd name as it uses a Spanish language word "San" (Saint) followed by Jon (Jon is a shortened form of the name Jonathan and also John in some countries). But in Spanish there is no name like "Jon", there is only "Juan" (John)

The fact that the San Jon Creek which flows northeast from San Jon into Texas near Glenrio, figures as "San Juan" in the General Land Office Map of 1936, hints at a deformation of the Spanish name "San Juan" (Saint John).

Another version says that it is a corruption of the word "Zanjón", Spanish for ditch or gully. But it seems improbable.

Service stations, motels and diners were established to cater to the tourists travelling along Route 66.

When I-40 was built, bypassing San Jon in 1981, business declined along Route 66 as it relocated to the Interstate interchange to the north.

View of San Jon, looking north from the caprock escarpment of the Llano Estacado

Book your hotel near San Jon

> > Book your Hotels in nearby Tucumcari
or Santa Rosa

Lodging Near San Jon along Route 66

Book your hotel in neigboring Tucumcari

>> There are RV campgrounds close to San Jon.

The weather in San Jon

This region is a relatively dry region. Summers are hot but lower temperature during the night makes them bearable.

Rainfall is scarce, with most falling during summer (8 inches from June to Aug.), in total, on average, 18.2 inches (461 mm) fall annualy.

Snow: Snow falls in this region at any time between September and May (the first snowfall takes place usually, on the first week of December). The higher altitude provokes more snowfall than in locations further east: Snowfall averages around 21 inches (53 cm), with most falling during Dec. and Jan. (6 and 5 inches - 12.7 and 15 cm). But some snow storms may take place with over 40 inches of snow (1 m.).

San Jon has a very low tornado risk, with only three (3) Tornado watches every year.

Getting to San Jon

Check out San Jon on our New Mexico Route 66 Map, with the complete alignment and all the towns along it.

Map with the alignment of Route 66 through San Jon

San Jon is a small town straddling Route 66 (Listed in the National Register of Historic Places) and NM-469, it has some old vintage garages and motels, one of them still in operation. Near the ghost towns of Endee and Bard and close to the Llano Estacado caprock.

There are two ghost towns to the east heading along Route 66 towards Glenrio on the TX - NM state line, which we detail below.

Visit, to the east, the nearby town of Glenrio (on the Texas state line).

To the west is Tucumcari, Newkirk and Cuervo followed by Santa Rosa.

The Old alignment of Route 66 near San Jon

Book your Hotel in Tucumcari, 43 miles away

This is the historic segment of Route 66 from Glenrio to San Jon.

The segment extends from Glenrio on the Texas - New Mexico state line to Saint Jon, spanning 18 miles. The road was commissioned in 1926 and followed the tracks of the now defunct Chicago, Rock Island and Pacific Railroad. It was the original alignment to San Jon until 1952 when it was replaced by the newer alignment (now I-40).

It was paved in the early 1930s, but nowadays is only paved for a very short distance (half a mile) from the Texas state line and then becomes a gravel surfaced road because Quay County removed the paving to cut maintenance costs.

Read about the Texas alignment of Historic Route 66 from Amarillo to Glenrio, including the Glenrio segment of the road.

The countryside is a semi-arid rangeland with rolling hills. The old railway can be seen near the road. It has several concrete culverts crossing the many streams that criss cross the area. There are four bridges east of Endee built in creosote-treated timber and were common in the 1920s and used to cross shallow rivers. 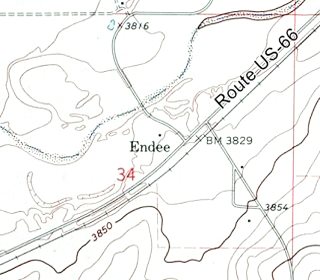 It is located 4.7 miles west of Glenrio, along the old Route 66.

The Day brothers, John E. and George, and Mr. Norris established a ranch named after their initials: "N D" in the area in the early 1880s. A post office opened in 1886 and was closed in 1955.

The Chicago, Rock Island and Gulf Railway crossed the region in the early 1900s, loading cattle at its siding. The small town was renown for its rowdy cowboys and their gunfights. The original houses were built with poles and sod roofs.

The Post office closed in 1955 and now some derelict buildings mark the spot.

It took its name from the ND ranch brand.

A Celtic word, found in Scottish Gaelic ("bàrd) and Welsh ("bardd"). It was used as a term to designate an itinerant musician.

Located on the old alignment of Route 66 12.9 miles west of Glenrio

The townsite was established in 1906, next to a siding of the CRI&G Railroad (Chicago, Rock Island and Gulf Railroad). A post office opened in 1908.

There are two versions about the origin of its name: one says that it derived from the Bar-D ranch brand, the other that one of its first settlers, a Mr. Haynes, named it after a water-melon railway siding in Texas.

It served the local farming and ranching community and in its early days was a very wild cowboy town where gunfigths were not uncommon. In 1926 Route 66 was aligned through it.

In the mid 1940s it had a gas station and a store. The population once reached 195 residents, but declined after I-40 was built, bypassing the small village. Today it is a ghost town.

> > See the previous segment Amarillo to Glenrio (to the east) and the next one San Jon to Tucumcari (to the west).

Roughly 9 miles south of San Jon, along NM-469 is the northern escarpment of the Llano Estacado, Spanish words that mean "Palisaded Plain".

The name originates from the appearance of the high plateau when seen from the surrounding prairies: the caprock appears like a wall, a palisade.

The Canadian River marks its northern border and the Caprock Escarpment, a 300 ft (100 m) cliff surrounds it to the north and east. The Mescalero Escarpment marks its western edge along the Pecos River. Towards the south it blends into the Texan Edwards Plateau.

Its red sediments are of Triassic and Permian origin.

The reservoir on the Canadian River is 13 miles long and offers many options for water sports: fishing, boating, swimming. There are campgrounds and RV facilities too.