Albuquerque's Route 66 Attractions: A detailed description of all the classic motels, neon signs, diners and gas stations along U.S. 66 (Central Avenue) from East to West through Albuquerque. In this page Eastern Albuquerque, the next pages describe Nob Hill, Downtown, the old Spanish Colonial Town, Nine Mile Hill and western Albuquerque.

Albuquerque's Attractions along US 66 (ii)

List of US 66 Attractions in Albuquerque: East to West, part 2:

In this page we describe the classic Route 66 sights from east to west, along Central Avenue through Nob Hill, Albuquerque, New Mexico.

This district is roughly 2 mi. east of Downtown's 1st St., just beyond the University of New Mexico. It spans fifteen block along old US 66 and is the place for shopping and eating. It has many historic iconic Route 66 buildings.

Route 66 was aligned along Central Avenue in 1937 and this brought new life to the dormant rural highway: motels and diners popped up along it. Flashing neon signs enticed drivers and stores sprung up to cater to the travellers. Route 66 gave Nob Hill its personality, it became Albuquerque's "Main Street" with the added charm of Route 66 Americana style architecture.

Opened in 1939 by S.D. Hambaugh and C.G. Wallace it offered comfortable accommodation and a Zuni crafts and jewelwry trading store. It was also mentioned by Rittenhouse in his US 66 Guide book published in 1946.

Below is a photograph we took in September 2016:

The De Anza Motor Lodge as it looks today

Named after Juan Bautista de Anza, a Spanish soldier and Explorer,born in Mexico in the 1700s, who opened the overland route from Mexico to California and founded what is now the city of San Francisco, California. It was in its time the biggest motel on East Central Avenue built in Spanish and Pueblo styles it had private phones and air-cooling in every unit. Wallace kept working it until his death in 1993. It is now closed, but some scenes of "Breaking Bad" were shot in its parking lot.

The Circle K was a "Motor Court" with two lines of rooms facing each other, and its postcard announce that it was "Best For Rest". The building is still there, as private apartments. 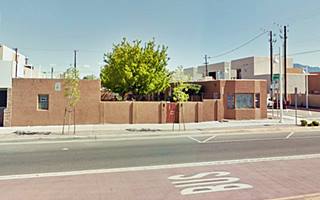 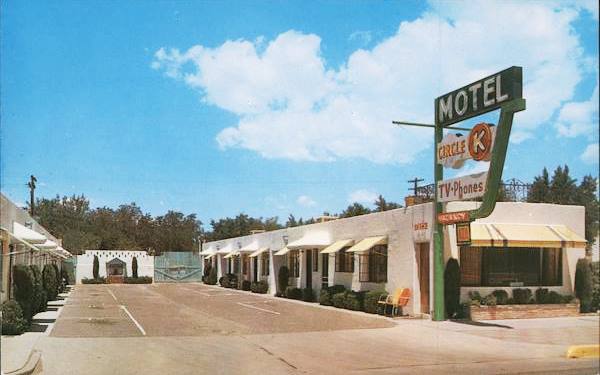 The Bel Air Motel was a motel with an "L" shaped layout, on the SW corner of Central Ave. and Graceland Dr.

This is its present appearance, it is the parking lot of a Thai restaurant that is across the street:

The Bel Air Motel as it looks today

It is still open and is the "Town Lodge" Motel. It opened in 1935 as the El Oriente Auto Court and was later known as"Minton Lodge" and its postcard stated "For a Pleasant Stay in 'The Land of Enchantment' ... One of the Newer and Finer Lodges in Albuquerque". The postcard of Minton Lodge is identical, except for the name.

Below is its current appearance: Trees have gone, and the curved walls have been "modernized" to straight lines, but note that the curved tops of the doors have remained unchanged.

The old Comfort Motel is now a private apartments building. A second floor was added, but the windows facing Montclaire Dr. SE are the still the same. This is its original appearance in a vintage postcard and its present appearance.

The Premiere Motel opened its doors in 1941 and is still open, catering to Route 66 travelers. Its iconic towering neon sign is a landmark.

It has kept its original appearance and upkept its neon sign:

The Premiere Motel as it looks today

The TraveLodge Motel is still standing, but has been converted into apartments: the "University Lodge". The motel had 55 units and a heated pool it was "Halfway between Uptown and Downtown areas, easy drive to Sandia Atomic Museum, Recreation Areas and Quaint Old Town". 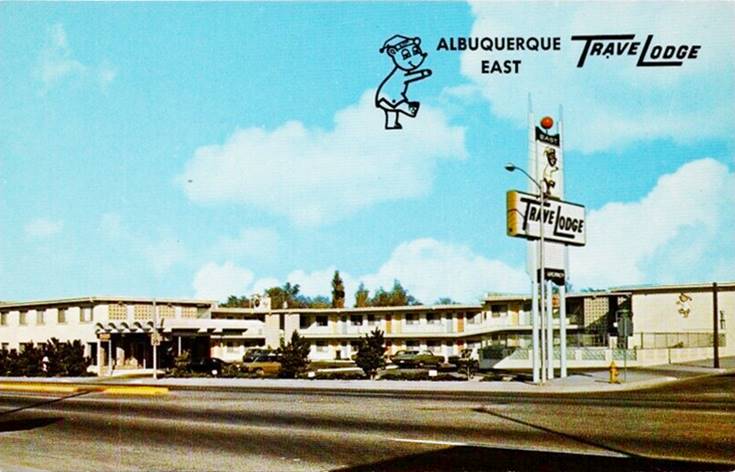 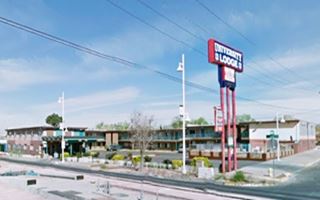 The Toddle House dates back to the early 1950's, and is now Newlins Café This is its present appearance.

The Nob Hill Motel opened in 1937, and is still open as a motel, the Nob Hill Court, with its original vintage neon sign.

It has not changed much over the years:

The Nob Hill Motel as it looks today

The Nob Hill Conoco dates back to 1939, shortly after Route 66 was aligned along Central Avenue. It is pictured below.

The Johnson Standard Station opened during the post-World War II boom years. It is pictured below. 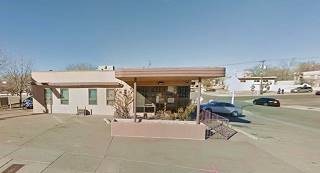 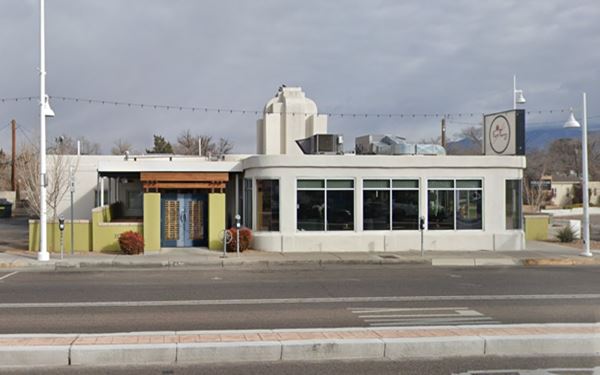 A photo I took of the Nob Hill Business Center in 2016 (click on image for Street View):

Built in 1946 it was New Mexico's first drive-in shopping center, an icon of America's love affair with automobiles.

Local developer DKB Sellers saw the opportuinity of a car-centered society and built it at a key location in Nob Hill. It had a U shaped distribution with a central parking lot. It is built in the Moderne style with two pairs of decorative towers, stucco walls and decorative brick courses. It is still open with many shops and restaurants. We shopped in the supermarket shown in the picture above. 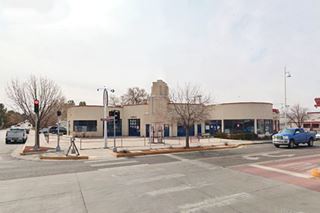 Built in 1939 by Ralph Jones it is an Art Moderne building that served as a filling station and car dealership.

Its tower was an eye catcher for those entering town from the east along Route 66. It was the most modern service station in the West. It is now the Kelly's Brew Pub and has been restored and is a restaurant. See its Street View. 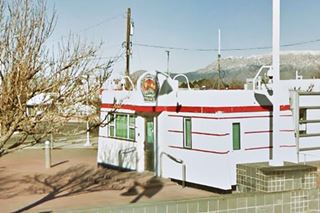 Valentine Diner in Albuquerque, by Google. Click on image for larger view.

This is a 1940s Valentine's Diner which has been refurbished and renovated. It is now used as a police substation in Nob Hill.

A Diner which once stood on 8th and Central as the "Albuquerque Diner", is a typical example of Route 66 "Americana" (More on Americana), it was a prefab restaurant, defined as "a restaurant shaped like a railroad car", the name derives from "dining car".

The diner was one of at least 2,000 diners built by the Valentine Manufacturing Company of Wichita, Kansas. They were ready-to-use mobile diners with stools, tables and counters, plus a kitchen area. They were available in different sizes and models.

Arthur Valentine (1891 - 1954) invented them and began producing them in 1947. After good growth during the 1950s, the company gradually lost business in the 1960s and folded in 1975, the fast food chains and suburbia had displaced the small diners.

There are more of these diners on Route 66: the Red Top Valentine Diner in Edgewood NM, Twin Arrows AZ Valentine, and the Winslow Arizona Valentine.

Read all about Downtown's Route 66 attractions in our Next Page.