Albuquerque's Attractions along US 66 (iii)

List of US 66 Attractions in Albuquerque: East to West, part 3:

In this page we describe the classic Route 66 sights from east to west, in the Downtown district of Albuquerque, New Mexico.

The Pig and Calf has a black and white ceramic facade with the words "Pig and Calf " written on it, and their images too. It opened in 1924 as the "Pig Stand" a barbecue restaurant and acquired its present appearance in 1935. During the 1950s it was the University Café and it reopened in 2006 as the Pita Pit. 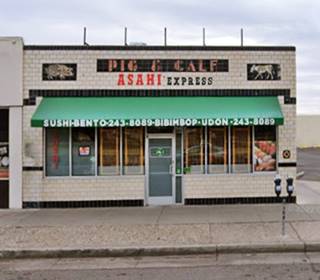 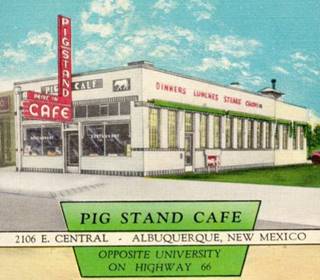 Postcard of the Pig and Calf. www.ebay.com

The bakery which gets its name from its cottage-style building has been serving Route 66 customers since it opened in 1937. Street View.

Contemporary but built in an art moderne style it is a retro-dinner with jukebox and soda fountain.

This is the second Gull Wing gas station in Albuquerque (this is the other one). It is pictured below. 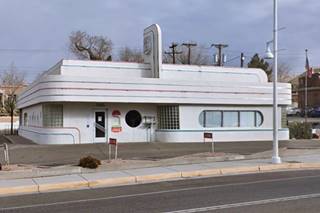 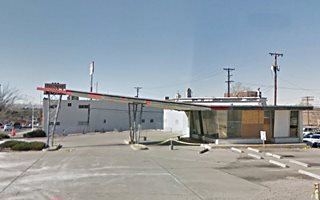 The Crossroads Motel got its name because it was built next to the main crossroads in Albuquerque: US 66 and US 85 During the late 1950s and early 1960s, I-25 replaced US-85 through the city.

It appears in Breaking Bad: it is where Hank takes Walter Jr. to warn him about the evils of drugs.

The motel has added a tall sign to lure visitors from the Freeway, but otherwise it has not changed:

The Crossroads Motel as it looks today

The Hyatt Chalet Motel is still open as a motel, it is the Econo Lodge Downtown. This design dates back to 1960 when Hyatt planned to build some 200 similar motels by 1966. They became the Hyatt Lodges, a new division within the company. This one has very "sixtyish" colored glass panes on the facade. Notice the steep gabled roof and compare it to the other extant motels of this chain, also on Route 66 : the Needles Inn (Needles CA), and Swiss Lodge (Pasadena CA).

An intersecting hip has been added to the gabled roof, but it is basically the same.

The hyatt-chalet as it looks today

The Whole Hog Cafe is a BBQ chain store in a building which was once part of Denny's, a chain which opened in California in 1953 s Danny's Donuts and renamed to Denny's in 1959. They adopted a modern space age boomerang roof design in the 1960s, it was designed by Armet & Davis and they displayed a hexagonal shaped sign which can be seen in the image below.

There are more of these Denny's on Route 66: the Barstow CA Denny's Diner, the Denny's in Kingman AZ, the Denny’s Diner in Needles CA, the Denny’s Tucumcari Diner and the one in Gallup NM.

The Whole Hog formerly a Denny's as it looks today. The original Denny's sign is there, but with different words:

The Imperial 400 Motel is now the Imperial Inn. It announced on its postcard that it was "A pleasant place to stay for rest, relaxation, or to make a headquarters for your business trip into the heart of the city".

Imperial 400 was a motel chain founded in 1959 and its buildings had a characteristic "Gull Wing shaped roof" (like this motel has). It went broke in the mid 1960s and sold out to new owners. There are plenty of them on Route 66: the Imperial Winslow AZ and Vagabond Inn Pasadena CA; the Imperial Motor Inn in Needles CA and the Imperial 400 in Barstow, California.

The Imperial 400 Motel as it looks today

You can Book a Room in the Days Inn

The TraveLodge Downtown is still open as a motel, though now it is the Days Inn. It has remained unchanged and its original neon sign has been kept and given a second life. It is pictured below in a "Then and Now" sequence: 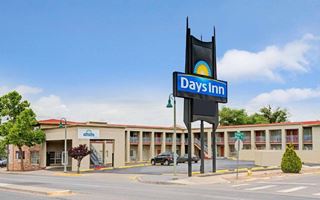 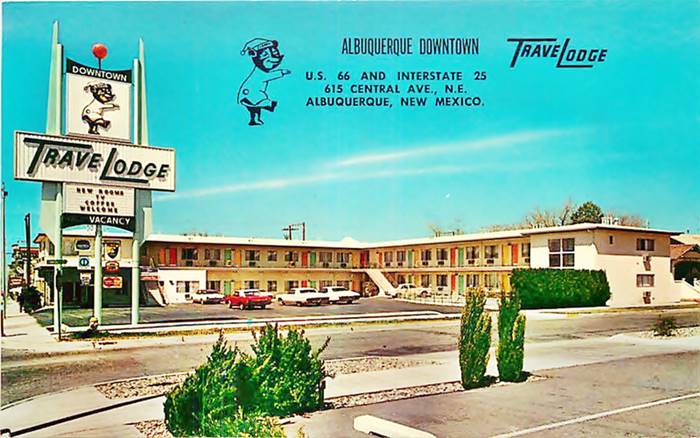 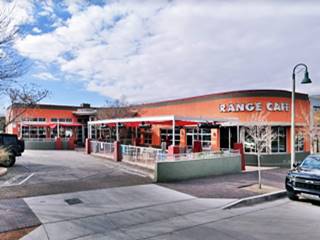 This former Texaco gas station was built in 1938 on the then brand new alignment of Route 66 through downtown Albuquerque. Now it has been refurbished and is the Standard diner, an American diner.

This is Downtown Albuquerque, take the underpass and there is a large parking area ahead, between 2nd and 3rd Streets. You can park your car and do a walking tour. It is a 1.1 mile round trip and this is the map.

The Hilton Hotel was built in 1939 and Rittehnouse mentions it in his Guide to Route 66. According to the postcard, it was "New Mexico's newest and finest hotel... Duncan Hines approved, Refrigerated air conditioning and heat individually controlled throughout. Convenient drive-in entrance...". It is still in operation as a hotel, the Hotel Andaluz. 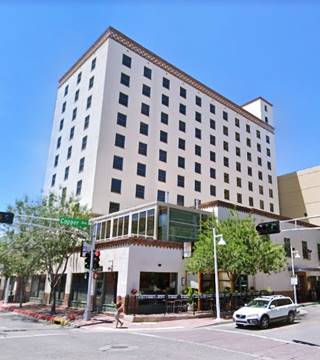 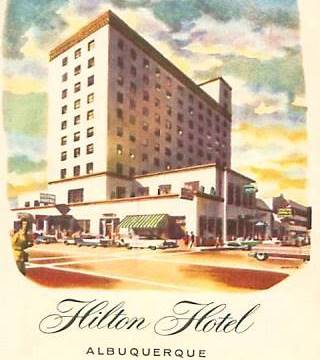 South 4th St. was the southern course of Route 66 that led out of town from 1926 to 1937. It went along the Rio Grande Valley passing through Isleta, Los Lunas and Peralta before heading west towards Laguna and western New Mexico.

Barelas is one of ABQ's oldest districts. US 85 also passed through it until the 1960s when traffic shifted to I-25.

Plenty of vintage markets, food stores, and gas stations. Below are some of them with their street views (click link to see):

The El Fidel Hotel was mentioned by Rittenhouse in his Route 66 Guide. It opened in the 1920s and was doubled in size in 1934. In 1981 it was converted to offices and completely redone in 2014 as the Cooper Center. It has 5 stories. 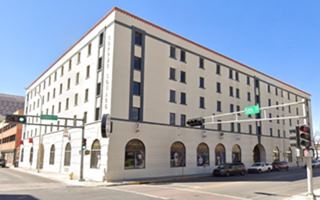 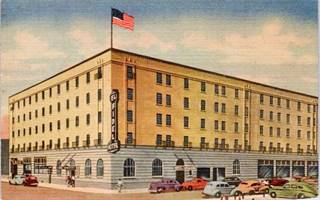 Madonna of the Trail

The National Society of Daughters of the American Revolution (NSDAR) established a committe in 1911 to promote the highway that became the National Old Trails (N.O.T), and later, in 1926, Route 66. The NSDAR commissioned 12 identical statues (one for each state crossed by the N.O.T.), as a symbol of the courage of the pioneer women who stood by their families and helped tame the West. There is another one on US 66: the Madonna of the Trail in Upland CA. All were sculpted by Auguste Leimbach and they are 10 ft. high (10.5 m).

Head back to Central Avenue and head west.

Amazing fusion of Pueblo and Art Deco style theater which opened in 1927. Below is the photograph I took in Sept. 2016:

The swastika was a Navajo symbol for life, happiness and freedom long before it was desecrated by its abominable use in Nazi Germany.

Urban myth has it that the ghost of a six-year old boy haunts the theater, he was killed when a heater exploded in the lobby in 1951.

The name "Kimo", in local Pueblo Isleta language, means "King of its kind". It was built for Oreste Bachechi and cost $ 150,000 in 1927. The three-story building has a steel frame and brick walls with ornamental glzaed tile decoration. The marquee and entrance were refurbished in the 1950s. Its decoration includes native designs in chandeliers, staircases and murals.

It closed in 1968, was almost demolished but saved on time it was restored in the 1990s and currently the offers performances and films. Self guided tours daily from 9 AM to 4 PM. Closed Sun, Mon. Website: www.kimotickets.com.

Cross Central Ave. and on the corner is:

Opened in 1929 and still catering to customers. Street View.

Built in Indian Pueblo sytle in 1939 by Maurice Maisel, it is still open selling Southwest souvenirs to tourists.

The windows are of pigmented glass and are topped with murals depicting Southwestern Indians painted by native artists. The terracotta flooring are also decorated with native designs. 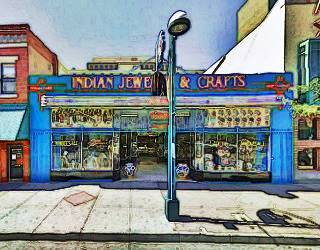 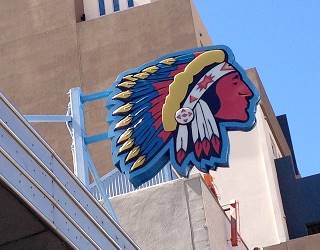 Keep walking west, on the next block are two sights:

Founded in 2001 by Holocaust survivor Werner Gellert and his wife, Frances, promotes understanding and teaches about many genocides bresides the Shoah. The building's green and white Art Deco facade is beautiful. It is pictured below.

Listed in the State Register of Historic Places

Built during WWII, in 1941, it was an adult theater at one time and now hosts bands as a night club, reborn on Route 66. 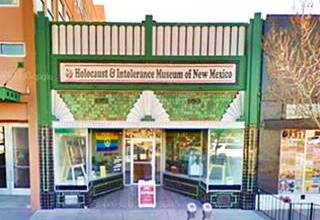 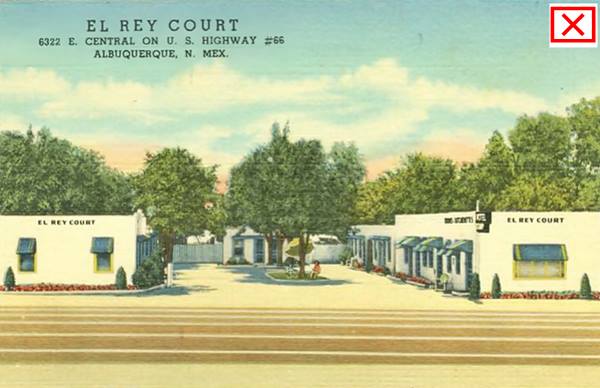 Built in 1929, it was the first Firestone Tire Company store in town. It is pictured below.

This Art Deco style building was built in 1931 and is currently an Italian Restaurant. Pictured below. 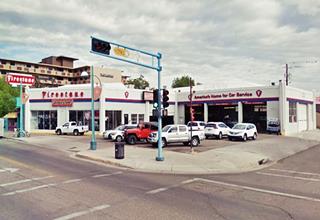 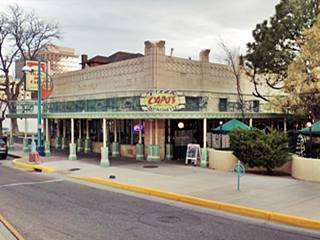 Across the street is another classic:

You can Book a Room in the Hotel Blue

The Downtowner Motor Inn (currently the Hotel Blue) opened in 1965 and changed names a few times (Downtown Inn, Quality Inn, Ramada Inn). Some of its 1960s style has survived the remodelations. The 1974 postcard pictuerd below announced: was "In the heart of downtown... Free TV - Hi-Fi (in those days there was no WiFi, only Hi Fidelity) reasonable rates.". 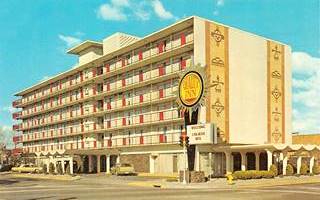 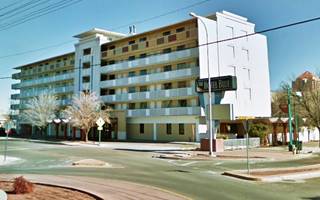 Continue West into the Old Spanish Town and Western Albuquerque

From here, at the old Quality - Downtowner hotel, you can turn around and head back to your car to continue your driving tour westwards:

Read all about Western Albuquerque's Route 66 attractions in our Next Page.