Albuquerque's Attractions along US 66 (iv)

List of US 66 Attractions in Albuquerque: East to West, part 4:

In this page we describe the classic Route 66 sights from east to west, in the Western part of Albuquerque, New Mexico.

Start in the Downtown part of Albuquerque and head west along Central Avenue:

Almost unchanged but it is a pity it lost its lovely 60's neon sign:

The Historic Horn Oil Co. and Motor Lodge was built in 1946, and though modified, the old structure is still standing, now it is the "Country Club Plaza".

The old Gas station and Motor Lodge is now a Shopping Mall, but the eastern portion (on the left side of the image below) was during the 1960s a "Gull Wing" Phillips 66 gas station, the "Acoma Phillips", which burned and was partly restored its three service bays have survived and are part of the building (This is a 1960s photo of the gas station).

The Horn Oil Co. and Motor Lodge as it looks today: 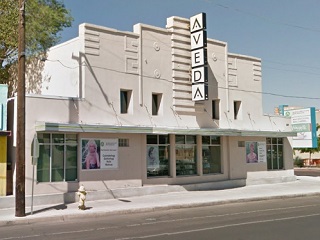 Built in 1946, Sandia Theatre has survived and can be seen as a classic theater of its time.

Turn north towards the old Colonial Town, park and stroll around the historic Plaza.

The Old Town of Albuquerque is the original site where the Spaniards founded the town in 1706. It spans about 10 blocks around the central Plaza which was the heart of the Spanish colonial town. The San Felipe de Neri historic church built in 1793 is located on its northern side.

This part of the city still looks like it did in the 1700s, with Pueblo-Spanish styled adobe buildings that have been converted into souvenir shops and restaurants. Enjoy its brick paths, hidden patios and adobe benches ("bancos").

More information at the www.albuquerqueoldtown.com

Built in 1793, it is one of the oldest surviving buildings in the city. Below is the photograph I took in Sept. 2016:

It replaced the original 1706 mission church, completed in 1719, whose original name was San Francisco Xavier, but the Duke of Albuquerque renamed it after King Phillip of Spain ("Felipe").

The building collapsed in 1792 due to heavy rain and the current church was erected the following year. Towers were built in 1861 and the school and convent were added between 1878 and 1881. See its Street View.

Buy some souvenirs or enjoy the scene and return to your car and Route 66:

The Tower Court motel was built in 1946 and is now a private apartment complex. It has lost its emblematic "Tower" but retains its original layout and appearance: 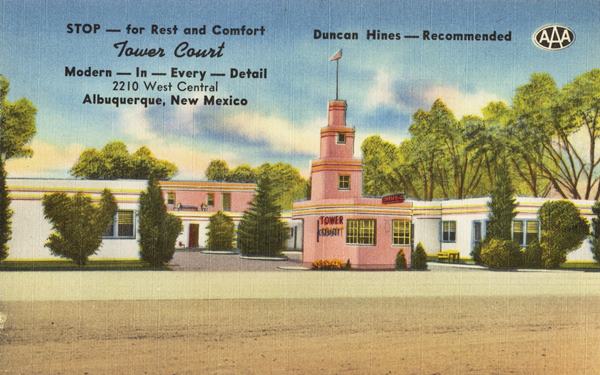 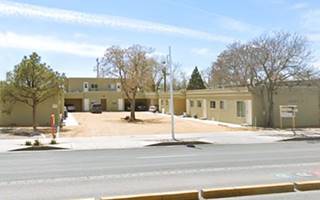 It's basic "U-shaped" layout has remained, and has also kept its iconic Route 66 sign of a neon cowboy riding a horse with a lasso in his hand. but a second floor was added to the eastern wing.

The El Don Motel as it looks today

You can Book a Room in the Monterey Motel

The Monterey Court or Monterey Motel mentioned by Rittenhouse in his guidebook, has kept its classic Route 66 neon sign till this day. And is still operating as a motel.

Except for its original and classic neon sign, the building has changed: gabled roofs crown what once was a pueblo-style motel with curved lines. The sign's color is now blue instead of its original red and the word "Court" was replaced with "Motel":

The Monterey Motel as it looks today

The Country Club Court dates back to 1937 and it was one of the original motels on the new alignment west of Albuquerque. It too was mentioned by Rittenhouse. It has changed quite a lot, but is recognizeable: 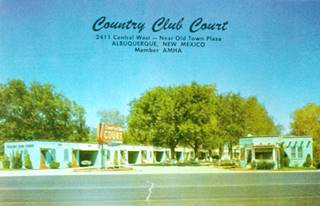 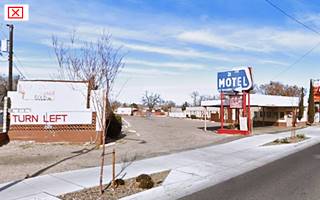 Motel 21 was the Country Club Court. Click for Street view

Opened by Daniel Murphy in 1937 to coincide with the new Laguna cut-off alignment of Route 66 which bypassed the historic Rio Puerco bridge and headed straight out of town along the new Rio Grande Bridge. The name "Vado" is the Spanish word for "ford". Rittenhouse mentioned it in his Guidebook.

It originally had 32 units and a filling station. It was built in Spanish Pueblo Revival style. Later a pool was added, the gas pumps were removed. It ceased operating in 2008.

The buildings are still standing, fenced off and lonely:

The El Vado Court Motel as it looks today

Find your room in town: hotels in Albuquerque

Beyond the Rio Grande

The road now crosses the Rio Grande River and heads west, which Rittenhouse described in 1946 as follows: "Many tourist courts line the highway along here. Almost at the edge of town, you begin to climb the long, steep grades out of the Rio Grande valley, and onto the plateau". It was the famous Nine Mile Hill, all the way to the Rio Puerco River.

As of Sept. 2016, these signs were still standing, alone, on the eastbound lanes. The old motel buildings had been razed but their signs remained:

There are two old motels facing each other on the 5600 block of Central Avenue West:

The An Old Motel, no details regarding its former name. It has a linear lay out with two sets of units facing a central court. With gabled roofs. It is now used as apartments.

The Another Old Motel with a similar linear layout. The place is abandoned and has a "Pueblo" style architecture. 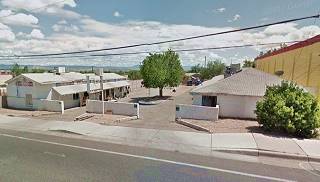 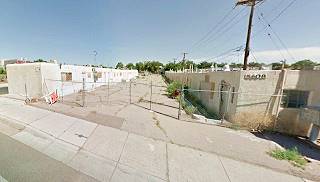 This was a Route 66 motel. Click for larger image

The El Campo Tourist Court (which would mean "The countryside" or "the field" in Spanish) was also known as El Compo, with a letter "o", which has no meaning in Spanish. It was built and operated by M. H. McGraw in 1939 and at that time was described as "modern tourist apartments, filling station, store and trailer facilities". Later during the 1970s Mrs. McGraw managed it.

It has been restored and is now a private apartment complex; the same building can be seen in both photos:

The El Campo Tourist Court as it looks today

The Americana Motel was once the Whiting Brothers Motel in Albuquerque. The company was established in 1926 by four brothers and it grew to have more than 100 gas stations from Texas to California as well as Motels, on Route 66 you can still see the Continental Divide NM Whiting Brothers Motel and Holbrook AZ Whiting Motel. The Americana's neon sign is actually the original Whiting Bros. sign with the "WB" shield removed.

Beside it, to the west is an old Whiting Gas Station Sign which now is faded with the paint peeling off, with the words"Trailers" and "Gas". 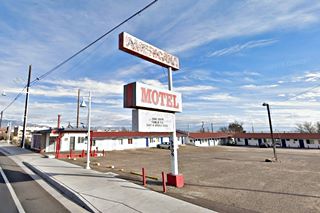 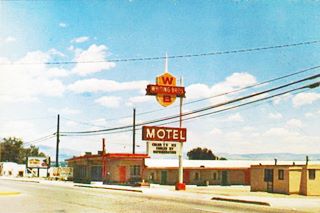 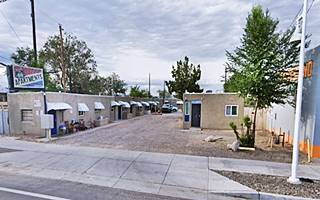 Across the street from the Siesta Court is a kitschy Route 66 sign at Mac’s La Sierra:

Mac's La Sierra Coffee Shop has an interesting sign with a steer on it. 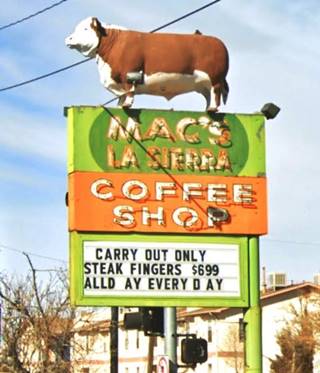 The La Hacienda Camp dates back to 1947, the boom days for travel after WWII. Its postcard announced that it was "a bit of Old Mexico"; it had 21 rooms and a sunken garden (now gone).

It has dropped the "La" from its name and is now the Hacienda Motel, but the sign is almost the same and so are the buildings, with a "U" shaped layout around a central courtyard.

The La Hacienda Camp is now the "Hacienda":

This Probably was a Motel

The "L-shaped" building on the Northwest corner of 64th and Central Ave. seems to have been a motel at one time. Now it is an apartment complex. See its Street View. It is next to the US 66 Gateway Arch, and beside the famous Western View Diner & Steak 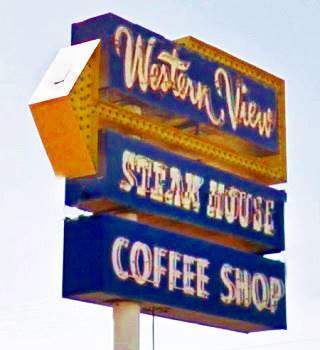 To the west, across 65th Street, is another Relict Motel Sign from some now demolished motel Street View. 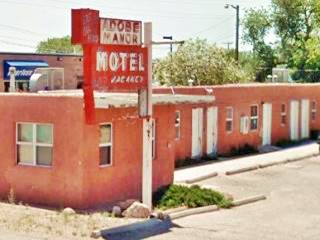 This old motel's neon sign is eye-catching and the ochre colored stucco units too.

The Westward Ho Motel was built in 1948. Don't miss its cactus-shaped neon sign.

It has retained its original appearance and its neon sign:

The Westward Ho Motel as it looks today

The French Quarter Motel is still standing, with a nice neon sign too.

Currently M and S, this is a 1940s gas station with five service bays and no canopy. 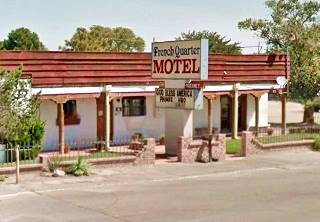 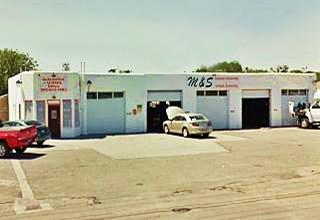 The Grandview Motel dates back to 1954 and is still operating as a motel.

The motel has the same layout and neon sign (with a different color scheme) and plenty of trees:

The Grandview Motel as it looks today

End of the Albuquerque Attractions Tour

From here, you can continue west along Route 66 to visit Suwanee, or head back into Albuquerque and enjoy your stay there.