Albuquerque's Route 66 Attractions: A detailed description of all the classic motels, neon signs, diners and gas stations along U.S. 66 (Central Avenue) from East to West through Albuquerque. In this page Eastern Albuquerque, the next pages describe Nob Hill, Downtown, the old Spanish Colonial Town, Nine Mile Hill and western Albuquerque.

Albuquerque's Attractions along US 66

List of all Route 66 Attractions in Albuquerque East to West:

From Sandia to Nob Hill

In this page we describe the classic Route 66 sights from east to west, starting at the point where Central Avenue splits off from I-44 at Exit 167. We head west across Albuquerque and end at Nob Hill.

Our next pages cover the sights and attractions in the rest of Albuquerque:

You can Book a Room in the Mountain View Inn

The American Motor Inn with a very 1960s "Googie" style architecture of bold geometric space-age lines, is now the Mountain View Inn & RV Park which has morphed the style into a "Pueblo-Spanish Revival"one with pink colored stucco and rounded shapes.

The postcard read: "A modern Oasis in the Heart of Indian Country. 52 completely new Modern Units... Your Hosts - The Henry Martins (Hank and Mary)". Later it added an "A" becoming "Americana".

The original layout is there, but with softer lines:

The American Motor Inn as it looks today

Listed in the National Register of Historic Places & State Register

The La Puerta Motor Lodge is a a State and National Register site, built in 1949 and still open today but focusing on locals with mid term rentals. It's classic sign is still standing, untouched. "La Puerta" are the Spanish words for "The Door".

Below we can see its present appearance:

The La Puerta Motor Lodge as it looks today

Listed in the National Register of Historic Places & State Register

Built in 1949 it was the easternmost hotel in town. It is a U shaped property with 28 units built in the classic Pueblo-Spanish Revival style with projecting wood beams and stucco walls.

A typical neon sign with an arrow points the way for guests. It is a housing facility nowadays. But in the 1960s and 70s business fell when I-40 bypassed Route 66. Its name "Luna" is Spanish for "Moon". It's postcard announced "First-Class Accommodations - Excellent dining Room - Heated Swimming Pool... with a beautiful view of the Sandia Mountains".

As we can see in the following image, it has kept its original appearance (the trees have grown) but its sign is more attractive now, with the arrow.

The Luna Lodge as it looks today

The Piñon Motel (the Spanisopened in 1946 - 47 and was mentioned by Jack DeVere Rittenhouse in his 1946 classic "A Guide Book to Highway 66". Piñ on is the name of a local pine tree, from the Spanish word "Piñon" or pine cone and is pronounced pin-ee-on.

Below we see its current (closed) appearance. The sign has lost the rear part of the arrows but mainained the word Motel. Its uupper part has also changed.

The Piñon Motel as it looks today

It was mentioned by Rittenhouse in his 1946 guidebook, and at one time had been known as "Urban Motel Lodge".

Its sign is the same, there are fewer trees, but the motel is still in operation.

The Bow & Arrow Lodge as it looks today

> > Book your Hotels in Albuquerque

The Chevron Station opened in 1948 and is now hidden under a large billboard, it has a two-door garage facing Route 66 and an office with a curved glass-brick wall on the corner, in "Streamline Moderne" style. It is pictured below: 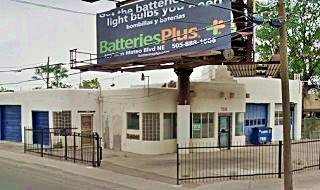 Present view of the Chevron Gas Station. Click on image for Street View 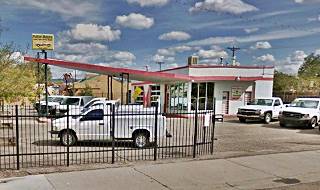 Book your hotel in Albuquerque

The Phillips 66 gas station pictured above, is now an auto dealership (Fulton Motors). In the 1960s, Phillips Petroleum Co. standardized their filling stations across the US and adopted a modern design with a triangular "gull-wing" canopy which was supported at its narrow tip by a pole designed to look like an oil derrick. Phillips 66 revolving sign stood at the top of the pole. There is Another Gull Wing service station further west in Albuquerque, and there are more of them on Route 66, like the one in Eureka, Missouri or the Santa Fe, NM, Phillips, and the Tucumcari Phillips Gull Wing.

The Loma Verde Motel, name which means "Green Hill" in Spanish, was built c. 1950 and is still open offering monthly rentals. It has kept its original neon sign.

Below is its present appearance:

The Loma Verde Motel as it looks today

The Pioneer Luxury Court or "Pioneer Motel" was built in 1949 and is still open as a motel. Its postcard shown below, from 1961, announced "...Near good restaurants. Everything modern... Singles and doubles; kitchens; tubs and showers. TV Sets...".

It has kept its original neon signs and improved them (notice the arrow above the word "Motel" and the curved neon arch over the lower sign).

The Pioneer Motel as it looks today

The Texaco Station dates back to 1948 and has the classic Texaco design created by Walter Teague in the 1930s. It is an "Oblong Box Gas Staton" with a rectangular plan it is softened by Arte Moderne curves on the corners and on the two crests that top the flat canopy. It has four service bays that face Route 66.

The building is still there, though it has lost its gabled roof. The car park area still has its roof (right side of images). 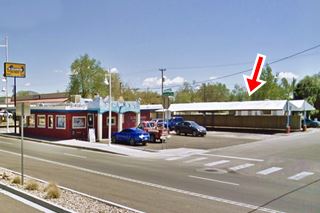 Present view of the Ace Cafe. Click on image for Street View 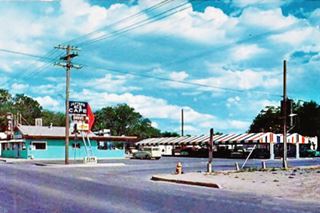 It opened in 1946, when post-World War II America was experiencing a road travel boom. It adopted an Indian name to evoke Southwestern charm. It was built in Pueblo Revival style with projecting wooden beams. Later during the 1950s, a neon arrow was incorporated into its sign. It is still open.

Below we see that it has barely changed: the sign has moved to the eastern side of the building and upgraded to a classic Route 66 neon sign, and a canopy was added at the office:

The Tewa Lodge as it looks today

The La Vela Lodge was built in the late 1930s, now it is the Lazy Motel. It has changed substantially, only keeping its linear layout. The postcard reads "One of Albuqerque's newest Motor Courts. De Luxe Hollywood Beds...Tile showers - All rooms with private bath". 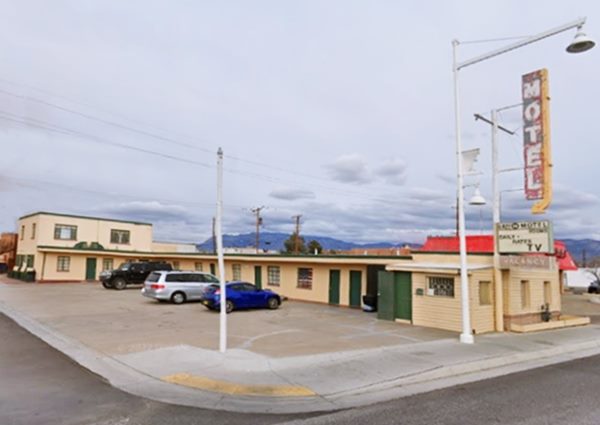 Present view of the La Vela Motel. Click on image for Street View 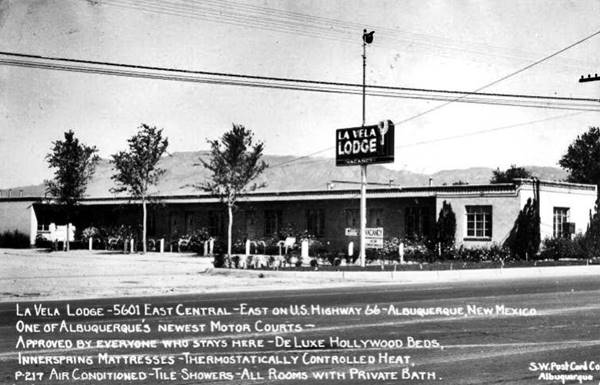 This was the site of the "Desert Sands Motor Hotel", built in 1953 with a "U" shaped layout. It was still operating as a motel when a fire broke out on May 24, 2016. The blaze burned the motel and injured two. The building was razed and all that remained was its neon sign. Surprisingly, the motel's original sign was less "66ish" than this on that survived the fire (which is pictured below).
You can see the original motel and its old sign in this postcard. 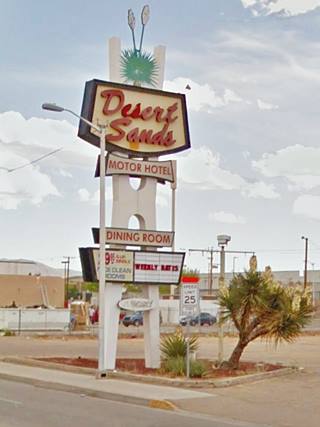 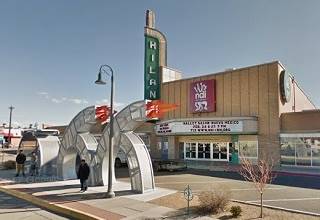 The Zia Motor Lodge dates back to 1940, and has gone; all that remains of the family operated motel is its neon sign -pictured above. Which is the origina one, as you can see in the postcard below. It was mentioned by Rittenhouse in his 1946 Route 66 guidebook. The back of the postcard shown below tells us that it had "Sun Deck... Patio... Located in the Highland Shopping Center... One Block Walking distance to Theatre and good Restaurants. Mr. and Mrs. Henry Martin, Owners and Managers."

Read all about Nob Hill's Route 66 attractions in our Next Page.