Prewitt a scattering of houses and virtually a Route 66 Ghost Town, it was the site of Prewitt's Trading Post, Justin's Trading Post and the Zuni Mountain Trading Post, now you can see the bright pink Tomahawk Bar and the Route 66's 1926 alignment towards Thoreau.

Prewitt is an unicorporated rural community in McKinley county, New Mexico. See a Map of Prewitt.

New Mexico has been inhabited for more than ten thousand years. The historic Native Americans who lived in this area were Navajo Indians and to the south were the Pueblos.

In 1540 the expedition led by Spanish "conquistador" Francisco Vásquez de Coronado reached the nearby Acoma and Zuni pueblos. These were the first Europeans to visit the region. But only after 1597 did they effectively settle in New Mexico. They were expelled during the 1680-1692 Pueblo Revolt but held the land until Mexico became independent in 1821.

The area where Prewitt is now located was under not settled at that time. Only after Mexico lost the territory to the U.S. after the 1846-48 Mexican-American War did it become pacified.

It was located on the main route across the Rocky Mountains in this part of New Mexico. After the U.S. Army subdued the Navajo people in 1864, and set up a fort (Fort Wingate), to the west, settlers began arriving to the area.

The Atlantic and Pacific Railroad (which later became part of the Atchison Topeka and Santa Fe RR) reached the area in 1881 and built a stop on mile 1456.4 which it named "Baca". (at that time there was another station with the same name just west of McCartys, which was renamed Anzac).

Baca was the name of a local family of Spanish origin. It figures with that name in the 1927 Rand McNally map of New Mexico.

The town was named after the Prewitt brothers who settled there in 1916. See the main text.

The Normans brought the French name "Proz" or "Proux" to England, and it meant "brave", "valiant". It became "Prew" or "Prow" in English, and it received the diminutiv suffix "ett" (from French "Petit") becoming "Prewett", "Prewitt" and "Pruitt".

Around 1917, the Prewitt brothers, Harold and Bob opened a trading post in Baca, the "Prewitt's Trading Post". They were from Gunnison, CO. The locals soon began calling the place after the brothers: Prewitt.

The post was known to the Navajo people as "White House" (Kin Ligaií).

Route 66 was aligned right through the village in 1926, with a winding course that crisscrossed the tracks and was straightened out in the early 1930s.

A post office opened in the town in 1928. By the time Jack DeVere Rittenhouse drove through it while writing his Guide Book to Highway 66, it was " A small community, including several railroad siding shacks and Prewitt's Trading Post. Just west is the depot of the Petroleum Products Refining Co.". It had no motels. 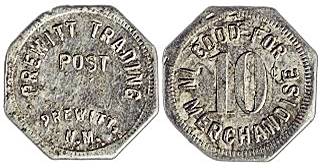 Trading with the Native Americans was a lucrative business, the shops usually minted their own currency in liew of money. This meant that the Indians sold their crafts and got these tokens which could only be redeemed for goods sold at the same Trading Post. This created a "captive" customer. The token in the image, from Prewitt's Post, says: "Prewitt Trading / Post / Prewitt, N.M." , and on the other side: "Good For / 10 / In Merchandise".

The Prewitt's trading post was bought by Justin and Odessa LaFont in 1946, becoming "Justin's Trading Post"; later it became "Western Shop" and eventually went out of business when I-40 bypassed it (1958).

A second post opened one half mile to the east of Justin's in 1947 and was owned by T.B. Greer, whose brother Bert owned a post nearby at the Continental Divide. It was complete and not only sold goods and curios, it had a motel, café and a filling station.

Greer later sold it to the Ortega. During the uranium mining heyday it focused on catering to the miners and the local Indians while Justin's Trading Post concentrated on the travellers along Route 66.

When Interstate 40 bypassed Prewitt, the Trading Post shifted its line of business and led by the Ortega it focused on wholesale and retail of Native American handicrafts. After Dave Ortega passed away, the premises were leased to other business. It has been demolished.

It was in Baca - Prewitt that Paddy Martinez, a mix of Irish and Navajo discovered the yellow colored rock that began the Uranium mining boom in New Mexico.

He was riding home when he decided to dismount and take a "siesta" under a tree. There he spotted the yellow ore. He took the rock home and sent it to be analyzed. It was uranium ore.

As the mineral lay on the land belonging to the AT& SF Railway's right of way, he did not file a claim -though he could have. The railway offered him $10,000 or a monthly check of $250 for the rest of his life. He chose the check and lived to a ripe old age of 91.

There is lodging close to Prewitt along Route 66:

> > Book your Hotels in neighboring Grants

Lodging Near Prewitt along Route 66

Book your room in neighboring Grants

>> There are RV campgrounds close by, at Lake Prewitt and in Grants

The weather in Prewitt

Prewitt has dry and sunny weather. The area is quite high and arid close to the continental divide. Summers are hot and Winters are cold; there is a large day-night temperature swing which makes for cool summer nights and very cold winter ones.

Strong snowstorms may hit Prewitt during winter; and the average snow fall each winter is about 11 inches (28 cm).

There is no tornado risk in Prewitt: McKinley County has no Tornado watches. The area west of this point has no tornado events at all.

On the main alignment further east, passing Albuquerque is Tucumcari and, on the Texas state line, Glenrio.

Map of Route 66 in Prewitt, NM

Color Key to the map is:

This is the map of Route 66 through Prewitt. The following color key applies to this map:

The relict remains of the original 1926-1930s alignment is marked by the Green line from Prewitt to Thoreau.

Check out Prewitt on our Map of Route 66 in New Mexico, with the complete alignment and all the towns along it.

Prewitt is almost a ghost town, and it was where Uranium was discovered in the 1950s. See the gaudy pink Tomahawk Bar next to the old Route 66.

The bright pink Quonset hut Tomahawk Bar is a sight you cannot miss as you drive past Prewitt along NM-122 (old US 66).

Built in 1947, it is not only a bar, it is also a trading post. See its street view above.

They were developed during World War II as quickly assembled prefabricated structures. They were made out of corrugated galvanized steel and have the shape of a half-cylinder, with a semicircular cross-section. Their name comes from the town where they were first built, in Rhode Island in 1941.

There are several tours that you can do near Prewitt, along Route 66 or futher away, towards the south into the "El Malpais" badlands and Zuni Mountains.

The Old alignment of Route 66 near Prewitt

Book your
Hotel in neighboring Grants

The 1926 Alignment through Prewitt

Route 66's original 1926 alignment passed right through the "village", along the Main Street, located on the south side of what was the later alignment of Route 66. This map shows its course through Prewitt.

The original 1926 route followed the alignment of NM State Highway 6, which in turn had been aligned in 1914 along the National Old Trails Highway system. It was, like the Trails of those days, not the shortest route, but the easiest to build. It crossed the AT & SF tracks several times between Prewitt and Thoreau. This was not efficient it was too long and also, unsafe so it was realigned when it was paved in the 1930s.

It was placed on the south side of the tracks and Thoreau was cut off from the alignment. While in 1926 the Mother road entered the town, now it left it isolated to the north of its roadbed.

The remains of the 1926 alignment

The Map above shows the relict remains of the original 1926-1930s alignment. It is marked by the Green line from Prewitt to Thoreau.

If you zoom into the map you will make out the roadbed. It cannot be driven along, but you could walk it or drive a bike along it. Notice that some culverts have washed away. It may lie in private property so request permission to avoid trespassing.

One small section can still be driven, the one corresponding to Indian Service Route 7018 on the north side of modern US 66.

Much closer to the village is the Bluewater Lake State Park with RV campground.