Madison, is just across the Mississippi from St. Louis.
See theDairy Master neon sign, the two Ghost Signs and the Historical Chain of Rocks Bridge.

All about Madison, Illinois

Humans have lived in Illinois since the retreat of the glaciers at the end of th last Ice Age some 12,000 years ago.

For the early history of Madison County, read this.

First post office opened on May 17, 1841 and the town was platted in 1891. Its population grew with the industry in the county but after peaking at 7,000 in 1970, the loss of jobs, and rust-bucket economic situation led to a loss of population.

Madison, its Hotels and Motels

> > Book your hotel nearby in Granite City

More Accommodation near Madison on Route 66

Madison is in an area that is struck by some 7 tornados every year.

Map of Route 66 through Madison (and St. Louis)

Color Key to the Map of Route 66 in Madison.

The following color key applies only to Saint Louis area:

Madison is in the central, right side of the map

Pale Blue: Historic Route 66.
The gaps in alignment, are along I-55, where it overlaps the old alignment.
Blue, Green, Gray, Pink, Yellow, Violet show different courses taken by US 66.
Brown is the Bypass US-66.
Orange: the 1926-32 aligment through St. Louis, read below for all the alignments through the city.
Black: missing segments.

Below we provide More information on US 66 in Madison.

Drug abuse and crime rates are high. Keep off the streets at night don't leave valuables in your car, and know exactly where you are going because you don't want to get lost or end up in a nasty neighborhood.

Not many Route 66 attractions have made it until the XXIst century. There are many vacant lots, boarded shops, abandoned buildings... but there are three things that we consider worth seeing in Madison:

Entering town from the east (Granite City), to your left is a Amazing Neon Sign:

The "antropomorph" cup with a straw is a great example of Route 66 Kistch!

Bulgarian Eastern Orthodox Church in America. The first Bulgarian Orthodox church board in Madison was organised in 1906. It was the first in the US

Ahead, now to your right. Stop and look back at the west facing walls, are two "Ghost Signs": 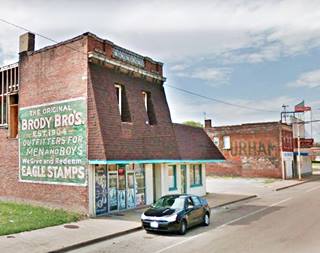 One is "Brody Bro's", the other "Durham" on the next building

A ghost sign is an advertisment painted on a brick wall from the late 1800s or early 1900s that has managed to make it to our days without being painted over or erased.

Head west into Venice cross the McKinley Bridge and enter St. Louis, because your Route 66 Tour in Madison ends here.

However, due to the extension of the city, it actually includes a Historic Site that is located on Bypass 66, to the north, which is actualy closer to Mitchell on BYP 66. But we will describe it here, in detail: the Chain of Rocks Bridge.

Below is a vintage postcard of the bridge:

It was one enormous project in its day, and it was a private one. It was supposed to cost $1,250,000 (a fortune at that time, and ended up costing twice the original estimate).

It was suppposed to be straight, but ended up bended due to the complaints of riverboat crews because it was just next to the water intakes for St. Louis, and would have made navigation difficult. Also, the original straight course led it thorough bedrock that couldn't withstand the weight of the bridge. So it was "bent".

It stood 55 feet above the water and had a 40 foot-wide roadway with 10 spans.

Construction began in 1927 on both sides of the Mississippi and it opened in July 1929.

It carried Route 66 across it since then and in the late 1930s the Bypass US 66 was aligned across it to avoid going through downtown St. Louis. The bridge was initially a toll bridge but it was later removed.

Access to the bridge from the Missouri side is CLOSED due to severe issues with car vandalism. You can park on the Illinois access. Do not leave any valuables in your car. Park at your own risk. The bridge is open to bikers and pedestrians daily from 9:00am to dusk and is wheelchair accessible.

Bridge entrance is accessible in Missouri at North Riverfront Park, south of the Bridge along the Riverfront Trail.

In 1981, the bridge was used to shoot a scene of the movie "Escape from New York".

It was the site of the 1991 murder of sisters Julie and Robin Kerry (Read more).

Castles in the River

Next to the bridge, on its southern side are two amazing "Castles" which are intake towers that bring water into the St. Louis potable water plant. Back in the 1920s, crews would camp out there inside those four-story buildings to keep water flowing into St. Louis.

The original alignment of Route 66 came from Mitchell and then headed south along MO-203 (Nameoki Rd.), turning south along the western side of Granite City via Edwardsville Rd.

At Madison Avenue it turned southwest going through Granite City proper and then continuing along Madison Ave., it entered Madison this alignment is shown with the Blue arrow in the map below.

From Madison it continued into Venice along Broadway and then across the Mckinley Bridge into St. Louis.

See it marked in Orange in the Google Map further up.

Below is a 1940 USGS map of Madison and as you can see the alignment at that time had changed (it is marked with a Red arrow).

The new alignment had moved (Green in the Google map further up) to the east and south of the city. Because instead of turning into Granite City along Madison Ave, it continued south and turned along the southern flank of that city along Edwardsville Rd.

Entering Madison it turned south with Alt US 67 along Mc Cambridge Ave. (MO-203) and then on Madison Rd., all the way to Collinsville Rd. to go through East St. Louis and cross the Mississippi River there, into St. Louis.

Route 66 was realigned later in 1954, through Collinsville (violet in the map).