Marlborough is located on the 1932-1977 Route 66, here stood the now demolished Coral Court Motel, but other classic Route 66 motels survive: the Duplex Tourist, the La Casa GrandeMotel, the Wayside Motel and the Chippewa Motel as well as Rischbeiter’s Garage.

The Main Alignment of Route 66 near Marlborough

The "Village of Marlborough" is a small town located on the 1932-1977 Route 66 alignment in St. Louis County, central-eastern Missouri just west of St. Louis city. (Map of Marlborough).

This part of Missouri was peopled some 10,000 years ago at the end of the last Ice Age. There are some earth mounds in the region (at Fenton and in Illinois), built by Native Americans around AD 1050 - 1400. In historic times, the French exporers from Canada reached the region in 1683 and met natives of the Algonquin nation who called themselves "Illiniwek" or "men" in their own language. These hunter-gatherers grew corn, squash and beans. The French corrupted their name to "Illinois".

The French named the land after their King, Louis IV: "Louisiana" and in 1764, Laclede and Chouteau founded St. Louis; settlers arrived shortly after. The French sold Louisiana to the United States in 1803 and shortly after, in 1805, Thomas Sappington settled there and built his home here in Marlborough (see Sappington House), and their Sappington Cemetery dates back to 1811, probably the oldest cemetery on Route 66.

St.Louis incorporated and became a municipality in 1809. The Territory of Missouri was created in 1812, and it became a state of the Union in 1821. In the 1830s the Native Americans were relocated to reservations in Oklahoma. This was a rural community with farms. After the Civil War, it grew slowly. Watson Road dating back to the late 1800s was named after Wesley Watson who owned a sand and gravel pit used in construction. Route 66 was aligned along it in 1932. Urban development in the post-war years converted it into a commuter suburb of St. Louis.

The name is that of the Norman family that lived at Marbury manor in Cheshire after 1066 AD. The manor's name was deformed to Marlborough. The town is probably named after the famous General, Duke of Marlborough or other towns named after him.

Accommodation and hotels near Marlborough

More Lodging near Marlborough along Route 66

More motels and Hotels close to Marlborough and Route 66

Weather widget for St. Louis, the city beside Marlborough

Marlborough has four well marked seasons. It is located in the area where humid continental climate shifts towards a humid subtropical climate, so summers are hot and humid while winters are cold. It gets cold Arctic air and hot damp tropical air from the Gulf of Mexico. Spring is wet and may have extreme weather (tornados, thunderstorms and even winter storms). Fall is sunny and less humid, with mild weather.

The town is located in Missouri's "Tornado Alley" and St. Louis County is struck by some 7 tornados every year.

You can reach Marlborough along historic Route 66 and also via Interstate I-44. I-270 is west of the Marlborough; US 50 and US 61 also run just to the west. Further east is I-55.

Map of Route 66 through Marlborough Missouri

Route 66's alignment in Missouri: the Historic Route 66 through Marlborough

Marlborough and its Route 66 attractions

Marlborough on the 1932-77 alignment of US 66 known as City 66. The famous Coral Court Motel stood here (now only its gate wall remains); but many icons survive: Rischbeiter’s Garage and some Classic motels: the Wayside Motel , the Chippewa Motel, the Duplex Tourist and La Casa GrandeMotel.

Neither the WPA travel guide "Missouri, a guide to the "Show Me" state" published in 1941 or Jack DeVere Rittenhouse's 1946 classic "A Guide Book to Highway 66" mention Marlborough. But, Rittenhouse does mention a motel in Marlbrough: "Other courts on west side of town are Wayside ..." and the now gone Bluebonnet.

A 0.8 mile drive. See this Map with directions. Start at the eastern end of town and drive west. There, to your left is a 1940s icon: 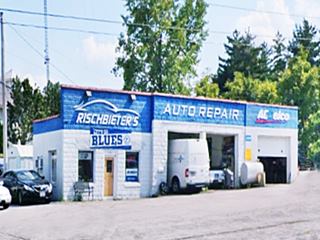 A one story concrete block building with a 3-bay garage and office. It was built around 1941. The Crystal Motel (now gone) was built next to it in 1946 and the famous Coral Court Motel (now Gone) once stood across the road. This area had many motels west towards Bypass 66, but now only a few remain.

Demolished, but it was Listed in the National Register of Historic Places

John Carr built it in 1941 with 10 cabins, another 23 were added in 1948 after WWII. It had yellow honey-colored glazed ceramic bricks and glass block windows with curved lines in an Art Deco style. 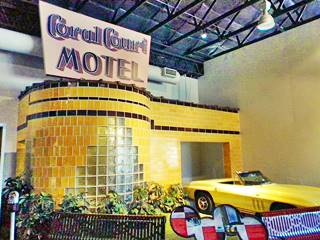 Carl Austin and Bonnie Headly kidnapped a six-year old boy, Bobby Greanlease Jr. in Kansas, in 1953. They cashed the $300,000 ransom and killed the child. They hid at this motel and were captured here. Convicted and executed, the ransom money was never found.

In 1993 the motel was forced to close due to structural deficiencies. Though funds were raised to save it, it was bought by Conrad Properties to develop the real estate as "Oak Knoll Manor Drive and Court". The motel was torn down in 1995. And the Museum of Transportation dismantled one complete bungalow which is now partially rebuilt and displayed at the museum: a curved glass block wall and part of its garage.

At the original site the only physical remains are the two stone entrance gate walls: 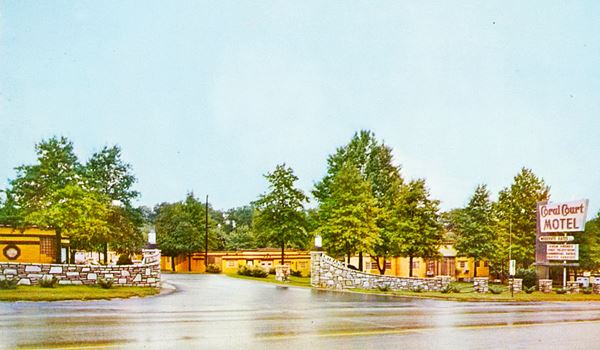 The stone gates of Coral Court Motel in a vintage postcard. www.66postcards.com
Click on image for larger view. 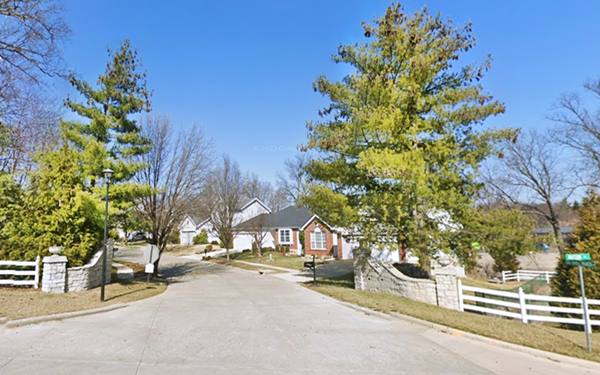 The stone gates of Coral Court Motel in nowadays. Click on image for larger view.

Owned by the St. Louis County Parks Dept. it has exhibits of all kinds related to transport: trains, cars, and, the remains of one cabin of the Coral Court Motel. Check the Museum’s website.

Ahead, to your left, on the hillside is the classic Wayside Motel: 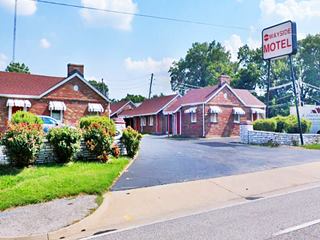 It dates back to 1938 and was located opposite the Coral Court Motel. Well preserved as it is was built in bricks, it had 33 brick cottages. It was named in Jack Rittenhouse's 1946 guide book and is still open.

Just beyond it, also on your left is the Chippewa Motel:

Originally known as Chippewa Tourist Cottages this motel (pictured below), built in 1937, has a U-shaped layout with three wings. The porch overhang on the wings is supported by iron posts. When built it had 13 individual cottages as was the standard in those days, with motor courts consisting on separate cabins. But by the late 1940s they had been linked and the place had acquired its current appearance. Nowadays it is an apartment complex. Further west is the Duplex Motel: 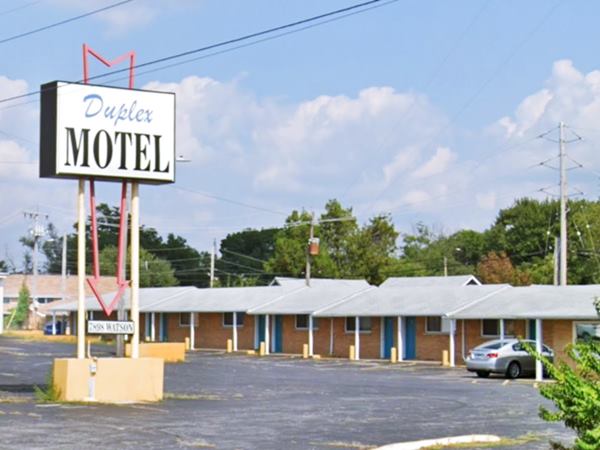 Duplex Motel at Marlborough, Click on image for street View

Chippewa Motel at Marlborough, Click on image for street View

The former Duplex Tourist Cottages, and later Duplex Motel which is pictured above, has two linear wings with 15 units and was built in 1936. Originally it was a "motor camp" with 11 cottages but evolved into a modern motel style in the 1940s after WWII.

And at the end of your tour is what used to be the La Casa Grande Tourist Camp:

The "La Casa Grande Tourist Camp" was built ca. 1940 as a Tourist Camp, with 8 individual units and modelled after the old Alamo Motel chain: a combination of Spanishi, Mediterranean and Mission styles. It now has 16 units located in a "U-shaped" layout with covered garages linking the cabins, with an arched opening. There is a creek behind it and the office faces the highway on the northern side of the property. It is Pictured above at the top of this page.

Shrewsbury is located to the east of Marlborough, on the city limits of St. Louis. It has no Route 66 attractions other than the Frisco Railroad underpass. Route 66 passes under the railroad tracks. Street View of the underpass.

The post office operated in Shrewsbury from 1893 to 1904, and it is named after the town in England.

Head west to visit Crestwood and Sunset Hills. Head east beyond Shrewsbury to visit St. Louis or head west and then go north along the former "Bypass 66" to Kirkwood.

Book your
lodging nearby:

From Marlborough to Crestwood

Crestwood is next to Marlborough, heading west along Old Route 66 - Watson Road, it is a short 2.7 mile drive , and this is the Map with Directions.

US highway 66's original alignment from 1926 to 1932 ran to the north of Marlborough it had an east-west course through Kirkwood along Manchester Rd. and therefore avoided having to cross the Meramec River between St. Louis and Villa Ridge. It is shown in Orange in the Map above; linking St. Louis & Maplewood in the east with Gray Summit in the west.

In 1932 a shorter and straighter alignment was built routing the highway along Watson Rd. This paved highway required two bridges to cross the Meramec, one at Sylvan Beach, to the west of Marlborough and another at Times Beach. As you can see in the map above this road is now partly overlaid by I-44 west of S. Geyer Rd. and Watson, in Sunset Hills (shown in Red). Eastwards, into St. Louis, the original road is shown in Pale Blue and was known as the US City 66 alignment.

There were many Route 66 alignments in St. Louis, including the Bypass US 66, that went around the city along its north and western sides and met the City 66 just four miles west of Marlborough, in Sunset Hills. This alignment is shown in Brown in the map above (click on "St. Louis US 66" button first).

By the early 1940s Route 66 was becoming congested and the heavy traffic made it unsafe. After WWII it was gradually improved: Rittenhouse mentions in 1946 that between St. Louis and Gray Summit "US 66 has three or more lanes". The interstate system was implemented in the late 1950s and I-44 was aligned close to US-66's course this led the state to petition in 1962 to have the Interstate renamed as I-66 instead of I-44, but this was denied by the AASHTO because the number "66" had already been used elsewhere.

The old four lane US-66 ⁄ I-44 Freeway was improved again in Missouri after 1965, and the old US 66 was upgraded to Interstate standards. By 1972 the whole of Route 66 had been replaced by the Interstate system. In 1974 it was decided that US Hwy 66 between Joplin and Chicago be eliminated, but his was delayed until I-55 in Illinois was completely brought up to Interstate standards. In 1977 the US 66 shields and signs were removed. Marlborough was bypassed.

> > See the next segment Crestwood to Sunset Hills (west)