The Main Alignment of Route 66 (after 1954) at Edwardsville

All about Edwardsville, Illinois

Humans have lived in Illinois since the retreat of the glaciers at the end of th last Ice Age some 12,000 years ago. For the early history of Madison County, read this.

It is the third oldest city in the State of Illinois.

Herby the Hereford in Edwardsville, Illinois

The first settler was Thomas Kirkpatrick, in 1805, at the time when the European and Americans living at American Bottom, below the river bluffs moved out and into the tallgrass prairies of Illinois.

A community flourished and he named it after his friend Ninian Edwards. It incorporated in 1818. It was a farming community on the main trail into Central Illinois.

Edwardsville, its Hotels and Motels

> > Book your hotel in Edwardsville

More Accommodation near Edwardsville on Route 66

Hotels to the South, in Illinois

Find your room in town, Hotels in Edwardsville:

>> Check out the RV campground nearby in Granite City

Rainfall his fairly even throughout the year with peaks of 4.2 inches in April and May. With a minimum of 2 inches (51 mm) in January.

Edwardsville is in an area that is hit by about 7 tornados per year, so your chances of seeing one are not that large.

Map of Route 66 through Edwardsville, Illinois

See the alignment of US 66 in Edwardsville, on our Illinois Route 66 Map, it has the complete alignment across the state with all the towns along it.

Below we provide More information on US 66 in the neighborhood of Edwardsville.

Jack DeVere Rittenhouse published his "A Guide Book to Highway 66" in 1946 and he mentions Edwardsville, writing that it had 8,008 residents: "Bothman garage; hotels: Leland, Colonial; homes offer rooms for tourists; gas; cafes... Several Indian and pioneer relics are on display in a county historical museum here".

He added that 6 miles east of town, and three from Hamel was the "Green Gables tourist court and gas station", followed by another one 2 miles west. These two have vanished.

Head into town from the East along Historic Route 66. The first sight is an Old Store:

The old store to your right was the first grocery store east of town originally the Superior Cash and Carry Grocery, it became Halley's Cash Market in 1927 ans was ran by Thomas and Mayme Halley until 1972. Later it became Springer's Creek Winery. Its current appearance is shown below. 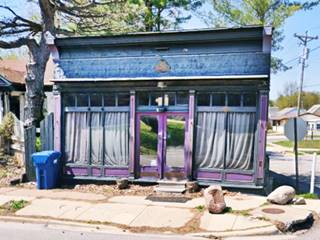 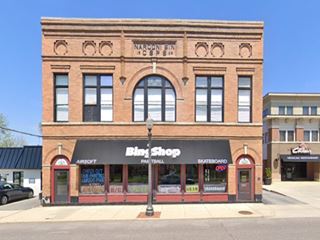 Drive into town and don't miss the "Historic Route 66" sign to your right at 133 St. Andrews Ave. (Street View.

Turn right along E Vandalia Street. Spot the Street paved with red bricks when you look north along S. Filmore Street; This is the Street view of Red Brick paving.

Keep west, pass the church and ahead to your left, just past N. Buchanan St. is the Czech Hall:

The Historic hall reads on its facade: National Hall Cecho Slovenský Podporující Spolky (Czechoslovak Protective Society) 1906. It was built in 1906 for Lodge Nbr. 7 which was housed here from 1906 to 1971. All meetings were held in the Czech language until 1958.

The lower level was leased to soft drink and liquor establishments until 1969. The first Czechs in the Edwardsville as farmers and laborers after 1851, escaping turmoil in the Austrian Empire in 1848. See it pictured above.

On the next block, to your right is a former hardware store which now is a pizza shop:

Dewey’s Pizza occupies the red-brick building that used to be the Kriege Hardware store which opened in this building back in 1948. The sign survived the closure of the store in 2011 and restored the word "Hardware" was replaced by "Deweys" and "Kriege" by "Pizza". But it is still there. The store is pictured below and further down is the original sign. 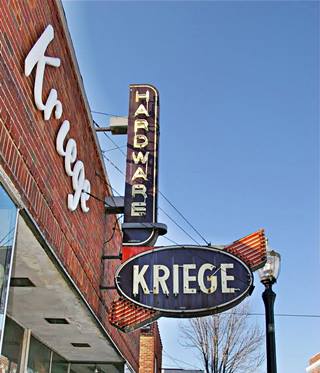 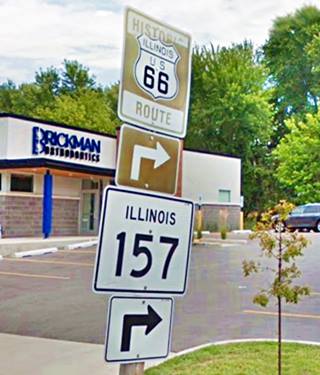 Now take a right along IL-159 (Main Street) to see a classic example of Kitsch & Americana it is on the second block, to your right:

The butcher shop is crowned by the iconic "Herbie the Hereford", it is in the image below, inside the blue circle. The shop opened in 1947 and is next to Wildey theater which was built as an opera house in 1909.

At the top of the page is a detailed view of "Herby the Hereford".

Head back to Vandalia St. and continue west along W. Vandalia for four blocks; it becomes St. Louis St. and at the corner of West St. where Route 66 turns south to leave town, to your left is a former gas station from the 1930s:

Originally a Madison Oil Co. station which opened in 1927. It was named the West End Service Station in 1936 and a new yellow-brick building was built. It is stil there, with its cottage style from the 30s. It ia pictured below:

The sign is on the eastern side of the road for eastbound traffic. It is Pictured above

And this is the end of your drive through Edwardsville, head west to visit Mitchell.

It is an 8.4 mile drive from Hamel in the east to Edwardsville Map with Directions.

The original 1926 alignment is still there, a two lane highway, currently State Highway 157. It then headed south and west to reach Mitchell. and from there (1926 - 1929) it turned south towards Madison to cross the Mississippi along the McKinley Bridge.

This would become the City 66 or main US 66 when in 1929 the Chain of Rocks Bridge opened, it allowed traffic to circle around St. Louis (via Bypass 66) or down into the city along CY 66 in MO.

Finally, in 1965 it was replaced by the 4-lane highway from Hamel through Troy and Colinsville further south, which bypassed Edwardsville and Mitchell.

> > See the next segment Mitchell to St. Louis (west)