All about East St. Louis, Illinois

Humans have lived in Illinois since the retreat of the glaciers at the end of th last Ice Age some 12,000 years ago.

There were up to 50 "Indian Mounds" in the area most lost to development and roadbuilding. They were ceremonial and burial sites of the local "Mississippian culture" which flourished from 900 to 1500 A.D., their capital was located at Cahokia Mounds (near Collinsville). They were farmers and hunter-gatherers. Famine due to drought led to their demise.

First mentioned by French Jesuits in 1656 who heard about the "Illinois" natives from a party of Algonquins. Father Marquette reached the area in 1673, settling in Kaskaskia and Cahokia. At that time it was a French posession.

France ceded it to Britain in 1763 and it became part of the US after its independence in 1776. St. Clair County was created in 1790 and was the first county established in what is today Illinois. It predates the state.

Arthur St. Clair the governor of the Northwest Territory named it after himself. In 1801 it passed to the Indiana Territory, and back to Illinois when the territory was created in 1809.

Illinois became a state in 1818. What is now East St. Louis was founded in 1797 by Captain James Piggott, a Revolutionary War veteran as "Illinoistown".

The municipality was established in 1861 and the residents voted on a new name for the town: East St. Louis, after the large city on the western bank of the Mississippi River.

The bustling industrial city was hit by loss of jobs in the 1960s and its population which had peaked in 1950 at 82,336 plumetted to one third of its former level.

The town has four well marked seasons. It is located in the area where humid continental climate shifts towards a humid subtropical climate, so summers are hot and humid while winters are cold. It gets cold Arctic air and hot damp tropical air from the Gulf of Mexico. Spring is wet and may have extreme weather (tornados, thunderstorms and even winter storms). Fall is sunny and less humid, with mild weather.

East St. Louis is in an area that is hit by about seven tornados per year.

See the alignment of US 66 in East St. Louis, on our Illinois Route 66 Map, it has the complete alignment across the state with all the towns along it.

This is the color key for East St. Louis:

Below we provide More information on US 66 in East St. Louis.

Drug abuse and crime rates are high. Keep off the streets at night. Know exactly where you are going. Don't get lost or end up in a bad neighborhood.

NeighborhoodScout released rankings in 2016 that reveal that East St. Louis had the highest murder rate of any city in the US.

Having said this, and considering that most of the historic Route 66 buildings in the city have gone we suggest (at your discretion and caution) to avoid the alignment along 10th Avenue.

On N 9th Street there is an Old Gas Station:

To your left (north side of the higway) is an old gas station now tire shop.

Turn around and head back till St. Clair Ave, turn right and then left along Collinsville Ave. The city looks as if it had been bombed, empty plots of land and solitary red brick buildings, most of them boarded up.

At Martin Luther King Ave. take a left and on the block following the railroad grade crossing, to your left is a Gull Wing gas station:

This is a former Phillips 66 gas station from the 1960s. At that time, Phillips Petroleum Co. standardized their filling stations across the US, adopting a modern design.

This consisted of a triangular "gull-wing" canopy which was supported at its narrow tip by a pole designed to look like an oil derrick. The pole was capped with a Phillips 66 revolving sign.

There are two of them in East St. Louis (see below), and many on Route 66:

Retrace your steps to Collinsville Ave. turn right and, one block east, closer to downtown, to your left is a Historic Movie Theater:

The historic Majestic Theatre is a movie theater built in 1928 in Spanish Gothic style. The facade s tiled with patterns. It was the first in town to have air conditioning but it closed in the 1960s. It is in need of repair, but stood over Route 66 for decades.

Don't miss the Ghost Sign on the next building (Street View). A ghost sign is an old hand-painted advertising sign that has survived the ravages of time.

At Broadway turn left and three blocks south is Another Gull Wing gas station and a Former Motel:

The motel, now in ruins, was built in the late 1960s. Its amenities included a swimming pool and restaurant with cocktail lounge. Its "Now and Then" photos are shown below: 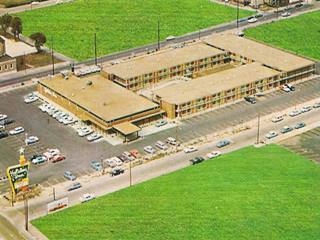 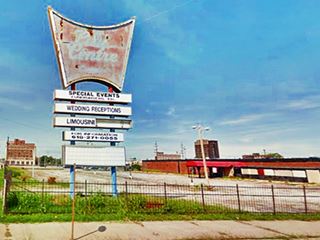 Just cross the road on the SW corner of E Broadway and 6th St. is yet another Gull wing gas station:

This Phillips 66 Gull wing is claad in stone, which gives it a curious appearance:

Visit the final sight in town, just barely 1.4 miles away (this is the Map with directions:

April through September: Daily eruptions at noon, 6PM, and 9PM (each 10-minutes). It hibernates November through March.

It is the tallest water fountain in the US and second tallest in the world with a rise of 630 feet (192 m) which matches the height of the Gateway Arch in St. Louis. It opened in 1995 as a landmark on Illinois' riverfront that complements the Gateway Arch in Missouri (you can see it across the Mississippi River).

Is 40 ft. tall (12 m) and is located at the western end of the park. It gives you a great view of the Mississippi River, St. Louis, its skyline and the Gateway Arch.