The Main Alignment of Route 66 (after 1954) at Collinsville

Collinsville is a city partly located in Madison County and partly in St. Clair County close to the Mississippi River in Southwestern Illinois, (Map of Collinsville).

What is now Illinois has been inhabited for at least 12,000 years, since the end of the last Ice Age. For more details on the town's early history a read here.

The first settler of what is now Collinsville, was John Cook around 1810. The founders of the city were the Collins family from Litchfield, Conn., who arrived in 1817 and purchased the holdings of Mr. Cook.

Originally called Unionville when a postoffice opened in 1825 the postmaster general changed the name to Collinsville, because there already was a Unisonsville post office in the state.

The town plat of Collinsville was laid out by 1837. Its incorporation as a village took place in 1850, and was organized as a city in 1872.

Coal was mined from 1857 to 1964. By the 1950s it was a bedroom community of St. Louis. And it was then that a new alignment of US 66 was built from Hamel through Collinsville and Fairmont City into St. Louis.

From the founding family's surname "Collins"

Accommodation and hotels in Collinsville

> > Book your accommodation in Collinsvile

More Lodging near Collinsville along Route 66

More motels and Hotels close to Collinsville and Route 66

Hotels to the west, in Illinois

The Weather in Collinsville

Rainfall his fairly even throughout the year with peaks of 4.2 inches in April and May. With a minimum of 2 inches (51 mm) in January.

Collinsville may be hit by some 7 tornados every year.

Map of Route 66 in Collinsville, IL

Check out Collinsville on our Route 66 Map of Illinois, with the complete alignment and all the towns along it.

Below is the color key for Route 66’s alignment in Collinsville:


Pale Blue: Historic Route 66 in town.
Red line or gaps in alignment, is I-55, where it overlaps the old alignment.
Blue, Gray, Pink, Yellow, Green show different courses taken by US 66.
Brown is the Bypass US-66.
Violet, the 1954 alignment through Collinsville.
Orange: the 1926-32 aligment.
Black: missing segments.

Route 66's alignment in Illinois: the Historic Route 66 in Collinsville

More information on US 66 in the area of Collinsville.

Jack Rittenhouse does not mention Collinsville the "Guidebook to US 66" he published in 1946 because at that time it didn't exist. And he drove along the bypass alignment from Mitchell west, across the Chain of Rocks Bridge and then along BYP 66 north and west of St. Louis.

Start your drive in the west, at Fairmont City limits on Collinsville Rd. and head east along the 1954-1977 alignment of Route 66 in Collinsville. To your right is the Site of a former Drive in theater:

The former Drive In is gone, but it has left its imprint in the terrain and the vegetation. See below, Red arrows. 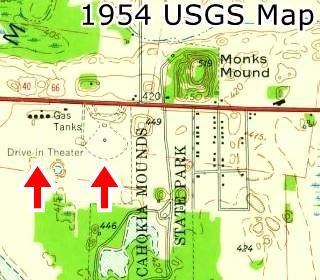 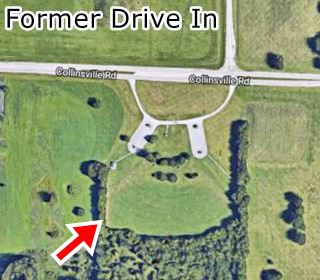 Satellite view of the Former Drive In Theater, Collinsville, Il. Click for view

Ahead, to your left, and you can see it from the highway is Monks Mound, the largest man-made earthwork in North America: 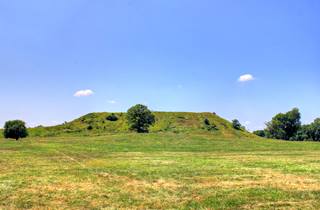 The photo shows Monks Mound, the biggest mound in North America, at Cahokia Mounds. This Mound is larger at its base than the Great Pyramid of Giza in Egypt (it covers 14 acres at the base - 5.66 ha. and is 100 feet high - 30.5m).

It is the world's largest man-made prehistoric earthen mound and is part of the Cahokia Mounds World Heritage Site, whose entrance is just ahead, to your right:

This settlement had a population of around 20 to 30,000 which made it the largest Pre-Columbian settlement north of Mexico and whose population wasn't surpassed by any city in the US until after the 1800s.

Apart from Monks Mound it protects over 70 mounds. There is also a reconstructed "Woodhenge" a museum and visitors' center.

It was built between AD 900 and 1200 by Native Americans of the Mississippian Culture. Originally it covered 6 sq.mi (1,600 ha.) and included about 120 mounds of different sizes and shapes.

Continue east along Collinsville Rd., but instead of turning left along State Hwy 157 take a very short detour to visit a Classic gas station:

Barely 0.8 miles from Route 66, see this map with directions.

It is a Cottage Style Gas Station from the late 1920s. It has been Eck Auto Service since 1958. The gabled roof, canopies and chimney are of a style that was popular at that time when service stations had to blend into their urban surroundings. It may have been a Phillips 66 station.

Retrace your steps and head north along IL-157. No motels have survived the ravages of time, some were torn down, others burned (arson) but nothing remains at the modern junction of I-55 and US 40 with State Hwy. 157. So follow beltline Rd., to your right, which was the original four-lane alignment of Route 66 north of Collinsville.

Just before it meets IL-159 and heads north (eastbound) to pass Troy and reach Hamel, is, on your right another Old Service Station:

Nowadays it is a Mad Hatter Mufflers garage, but it was a gas station back in the 1950s. See the original sign post and the two door garage plus the square lines of a classic gas station.

Further down you can see it in a USGS map from 1953, where the yellow arrow marks its location.

At the junction of Historic Route 66 and State Hwy. 159, take a short detour, turning right to head south to visit an example of Kitsch and Americana, the Brooks Catsup Bottle Water Tower:

Listed on the National Register of Historic Places - Americana & Kitsch

Standing 170 feet-tall (52 m) this water tower shaped like a ketchup (or catsup) bottle is said to be the world's largest catsup bottle.

The old canning and packing company was acquired in 1907 by the Brooks brothers, Elgin and Everett. They named it Triumph Catsup and Pickle Co. but it later became the Brooks Tomato Products Company.

Business was great and in 1949 the World's Largest Catsup Bottle was completed atop their plant, as an advertising for their leading product.

After merging with P.J. Ritter Co. in the 1950s, the catsup bottling was moved to a plant in Indiana in the 1960s. The factory became a warehouse. Though deeded to the city, it is now conserved by a the Catsup Bottle Preservation Group.

Learn more a their www.catsupbottle.com.

Trivia: Horseradish Capital of the World

Collinsville sponsors an annual Horseradish Festival during the first weekend in June at Woodland Park (Route 159).

This is the end of your tour through Collinsville but you can keep eastbound to visit the Hamel.

Map of US 66 in Collinsville. The map shows the 7.8 mile-long alignment of Route 66 through town. 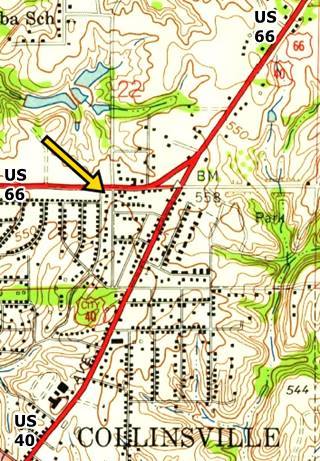 The 1953 alignment (shown in Violet in the Google Map above),

The main "US 66" and "Bypass 66" (BYP 66) which formerly split at Mitchell with the former crossing the Chain of Rocks Bridge and the latter going through Granite City and Madison into East St. Louis, now separated much further east: near Hamel.

Both alignments split at the point where modern Exit 33 on I-55 is located, just north of Hamel and east of Worden.

Both alignments gradually separated, BYP-66 (shown in Salmon in the Map above) with a westerly course and Main US-66 which ran further east with a southwesterly course.

Most of the main US 66 north of Collinsville is now under I-55 and its shown in Violet in the map.

Main US 66 From Hamel to Collinsville

In Violet. At current I-55 Exit 17, it merged with US-40 and both highways US-66 & 40 took a southwestern course (under I-55 today) and just south of Maryville, at Troy Crossing, (present Exit 15B of I-55) both highways turned south (along Vandalia St. - MO-159) heading for Collinsville, which they bypassed by taking a westward course on the town's northern fringe, along Beltline Rd., all of this alignment is a 4-lane highway

At what is modern MO-157 both highways turned south and then took a right, turning west towards St. Louis where modern Collinsville Middle School is now located, at the junction with Collinsville Rd. and St. Louis Rd. The roads then passed Monks Mound, leaving Collinsville and entering Fairmont City.

> > See the next segment Route 66 in Fairmont City (west)