Crestwood is located on the 1932-1977 Route 66, visit the Historic Sappington House (1808) and Sappington Cemetery (from 1811). And also the Ulysses S. Grant National Historic Site (and neighboring Grant’s Farm).
Route 66 classics include the site of the now gone "66" Park In Theater and a bowling alley: Crewtwood Bowl (see its neon sign).

The Main Alignment of Route 66 near Crestwood

Crestwood is a city located on the 1932-1977 Route 66 in St. Louis County, central-eastern Missouri. (Map of Crestwood).

This part of Missouri was peopled some 10,000 years ago at the end of the last Ice Age. There are some earth mounds in the region (at Fenton and in Illinois), built by Native Americans around AD 1050 - 1400. In historic times, the French exporers from Canada reached the region in 1683 and met natives of the Algonquin nation who called themselves "Illiniwek" or "men" in their own language. These hunter-gatherers grew corn, squash and beans. The French corrupted their name to "Illinois".

The French named the land after their King, Louis IV: "Louisiana" and in 1764, Laclede and Chouteau founded St. Louis; settlers arrived shortly after. The French sold Louisiana to the United States in 1803 and shortly after, in 1805, Thomas Sappington settled there and built his home here in Crestwood (see Sappington House), and their Sappington Cemetery dates back to 1811, probably the oldest cemetery on Route 66.

St.Louis incorporated and became a municipality in 1809. The Territory of Missouri was created in 1812, and it became a state of the Union in 1821. In the 1830s the Native Americans were relocated to reservations in Oklahoma. Ulysses Grant, who later became the 18th President of the U.S., lived in Crestwood from 1854 to 1859; his home is the Ulysses S. Grant National Historic Site. This was a rural community with farms. After the Civil War, it grew slowly. The original post office was named Sappington. Neighboring Webster Groves had a post office since 1867 and was named after Webster College. Watson Road dating back to the late 1800s was named after Wesley Watson who owned a sand and gravel pit used in construction. Route 66 was aligned along it in 1932.

The name came from a tree that stood on the "crest" of a hill on a street named Crestwood.

After World War II, St. Louis suburbia grew as the veterans bought their homes in its outskirts. Crestwood was quickly developed and subdivided, it incorporated as a city in 1947 to avoid annexation by neighboring Oakland. The post office was renamed Crestwood in 1947.

Accommodation and hotels near Crestwood

More Lodging near Crestwood along Route 66

More motels and Hotels close to Crestwood and Route 66

Crestwood has four well marked seasons. It is located in the area where humid continental climate shifts towards a humid subtropical climate, so summers are hot and humid while winters are cold. It gets cold Arctic air and hot damp tropical air from the Gulf of Mexico. Spring is wet and may have extreme weather (tornados, thunderstorms and even winter storms). Fall is sunny and less humid, with mild weather.

The town is located in Missouri's "Tornado Alley" and St. Louis County is struck by some 7 tornados every year.

You can reach Crestwood along historic Route 66 and also via Interstate I-44. I-270 is west of the town; US 50 and US 61 also run just to the west of Crestwood along the old Bypass 66 alignment. Further east is I-55.

Map of Route 66 through Crestwood Missouri

Route 66's alignment in Missouri: the Historic Route 66 through Crestwood

Crestwood and its Route 66 attractions

Crestwood on the 1932-77 alignment of US 66, the City 66 with the site of former "66" Park In Theater (gone) and a bowling alley with a neon sign, the 1950s Crewtwood Bowl.
American history sites: the Historic Sappington House (1808) and Sappington Cemetery (from 1811), the Ulysses S. Grant National Historic Site and neighboring Grant’s Farm.

It is not mentioned in the WPA travel guide "Missouri, a guide to the "Show Me" state" published in 1941 probably because the town did not exist at that time, it was a rural community. The same applies for Jack DeVere Rittenhouse whose 1946 classic "A Guide Book to Highway 66" makes no reference to Crestwood.

A 4.9 mile drive Map with directions.

There are almost no Route 66 landmarks in Crestwood. The growth of modern suburbia and urban development led to the loss of a classic Drive In movie Theater. But you can visit other local attractions. Start in eastern Crestwood at the old cemetery:

This is probably the Oldest cemetery on US 66, it dates back to 1811, and is located on Route 66. Here are many graves with soldiers who fought in many wars: the Revolutionary War, the US-English War of 1812, the Mexican-American War and the Civil War.

Just ahead, to your left is the site of the now demolished "66" Park In Theater:

9501 Watson, Crestwood; this is a Map showing its location.

The now razed "66" Park In opened in 1947 it was located in open countryside close to the urban population of St. Louis; it even had a merry-go-round and a Ferris Wheel. But by the mid 1980s, attendance dropped and it was sold in 1988 and remained open until 1993. It was torn down in 1994 and now is a mall. Street view of the former drive in theater. 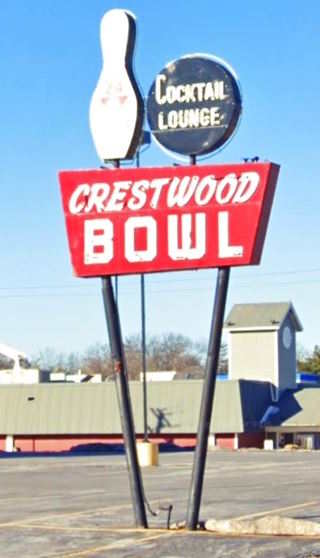 Take a right along Sappington Road to visit the historic house built over two centuries ago, in 1808:

Sappington House was built in 1808 and is believed to be the oldest brick house in St. Louis County, built in Federal style it has period furnishings. Do visit the Barn restaurant. Drive back to Watson Rd. (Route 66) and turn right to visit the classic bowling alley:

It opened in 1958 and has always been a bowling alley. Ray Bluth, a PBA Hall of Fame inductee bought it in 1973 and is run by his son Mike. 24 bowling lnes and a lounge plus snack bar. Don't miss its neon sign, pictured above.

Interested in American history? Then extend your tour to visit a Historic Place:

The best known Civil War general, who fought for the Union and became the 18th President of the United States, Ulysses S. Grant lived on this 80-acre plot of land gifted to him by his father-in-law, Frederich Dent when he married Julia Dent in 1848. The couple lived here till 1859. Grant built his log cabin here, and called it "Hardscrabble"; it was moved around quite a bit during the next 50 years (it was on exhibition at the Saint Louis World Fair of 1904, as an advertisment of the Banke Coffee Co. Augustus Busch (of the Anheuser-Busch beer company) bought it and returned to the farm, but not to its original location; it is 1 mile away, at Grant's Farm another local attraction; see below.

Admission is Free. Learn more at the Park's website.

This is an animal reserve that belongs to Anheuser-Busch; it is a refugee for over 900 animals (from over 100 species, including deer, zebras and buffalo). The land was once part of Grant's property. It has plenty of attractions including the log cabin built by Grant. More information at their website: www.grantsfarm.com.

Head west to visit Sunset Hills and, further away, Route 66 State Park , go east into St. Louis or head west and then north along the old "Bypass 66" into Kirkwood.

From Crestwood to Sunset Hills

Sunset Hills is right beside Crestwood along Old Route 66 (Watson Road) only one mile west; Map with Directions.

The original 1926 to 1932 alignment of U.S 66 west of ran to the north of Crestwood, through Kirkwood along Manchester Rd. and avoided crossing the Meramec River. You can see it shown in Orange in the Map above; from Maplewood in the east to Gray Summit in the west.

The highway was aligned to the south along Watson Rd. which was paved in 1932. A bridge was built at Sylvan Beach, to the west of Crestwood, to cross the Meramec River. As you can see above, this road is now partly overlaid by I-44 west of S. Geyer Rd. and Watson, this is shown in Red in the Map above. Eastwards, into St. Louis, the original road is shown in Pale Blue; this was the US City 66 alignment.

There were many Route 66 alignments in St. Louis, including the Bypass US 66, that went around the city along its north and western sides and met the City 66 just one mile west of Crestwood, in Sunset Hills. This alignment is shown in Brown in the map above (click on "St. Louis US 66" button first); Both Bypass and City alignments met at a Cloverleaf exchange, called so because of its shape, very popular in the 1940s, but as traffic crosses on the right lane it has its safety issues.

By the early 1940s Route 66 was becoming congested and the heavy traffic made it unsafe. The war truck traffic made it even worse. But it was gradually improved: Rittenhouse mentions in 1946 that east of Gray Summit and into St. Louis "US 66 has three or more lanes.".

During this period the US 66 bridge at Sylvan Beach suffered changes.

The old four lane US-66 ⁄ I-44 Freeway was improved again in Missouri after 1965, and the old US 66 was upgraded to Interstate standards. By 1972 the whole of Route 66 had been replaced by the Interstate system. In 1974 it was decided that US Hwy 66 between Joplin and Chicago be eliminated, but his was delayed until I-55 in Illinois was completely brought up to Interstate standards. In 1977 the US 66 shields and signs were removed.

> > See the next segment Sunset Hills to Fenton (west)