Sherman is a village north of Springfield that lies on several Route 66 alignments, one of them is the Historic Route 66 by Carpenter Park (1922-1936); see the site of former Hide-A-Way Tavern and the late 1920s Wayside Park and the 1946 Double H Bar.

Sherman, Illinois: all about it

Sherman is a village in northern Sangamon County, Illinois.

This is a Map of Sherman.

The History of Sherman

Central Illinois was peopled when the glaciers retreated 11,000 years ago. Later the Pottawatomie, Kickapoo, Tamaroa and Delaware Indian tribes would live in the area.

Settlers arrived in the early 1800s to the area known as Grasshopper (according to a local tale due to the large numbers of grasshoppers living there.

The town was platted by four men who , in 1858 purchased 80 acres of land belonging to the Wigginton estate. They later sold it to settlers. They were real estate developers along the Chicago & Alton Railroad built through the area at that time.

David S. Sherman (1812 - 1871) was one of the four businessmen that bought 80 acres of land and platted the town. His name was drawn from a hat which held the names of the four partners. So the town was named after him.

Sherman an occupation name means "shearer of woolen garments", it comes from the Anglo-Saxon words "scearra" or "shears" "Mann" or "man".

The town had a large Italian population in the 1900s and most worked in the local coal mine.

Route 66 was aligned through Sherman in 1926 and remaind so until it was de-certified in 1977.

Sherman, its Hotels and Motels

> > Book your hotel nearby in Springfield IL

More Accommodation near Sherman on Route 66

Hotels to the East, in Illinois

Find your room in neighboring Springfield:

The weather in Sherman

There are some 7 tornado strikes per year in Sangamon County (where Sherman is located).

Map of Route 66 through Sherman, Illinois

See the alignment of US 66 in Sherman, on our Illinois Route 66 Map, it has the complete alignment across the state with all the towns along it.

This is the color key for Sherman:
Pale Blue: South of town, it is the Historic Route 66 alignment (1930-77). North it is the 1935-77 alignment.
Green is the 1926 Wayside park segment in Sherman
Brown: Bypass or Beltway 66 in Springfield
Orange: the 1926-32 aligment into Springfield and the 1926-30 alignment from Springfield through Staunton.
Black: missing segments.
The approaches into St. Louis Missouri, have their own color coding, check cities in that area for more details.

Below we provide More information on US 66 in the neighborhood of Sherman where it is a Historic Site (Carpenter Park Segment).

Jack Rittenhouse drove the whole length of Route 66 and wrote the classic "Guidebook to U.S. 66", which he published in 1946. He mentions Sherman as follows: "Pop 100... gas; Withrow garage; grocery. Here begins a 5-mile stretch of divided highway... where the new freeway is being completed".

Not much remains of those landmarks, the divided highway survived as Sherman Blvd.

Begin your trip from the north. If you are using the Freeway use Exit 105, if driving the W. Frontage Rd. turn at Wolf Creek and stop at Sherman Blvd. To your left is an abandoned roadbed: US 66.

The four-lane alignment built in the 1940s runs north out of Sherman until Wolf Creek Road. Here the former southbound lanes are abandoned (see image below) while the northbound ones are still in use because they link with the freeway just ahead (where all of the four-laned US 66 is now covered by I-55 north until Williamsville).

This is a Satellite view of it.

"Old" lanes of US 66 north of Sherman, Illinois

Turn right and drive south into town along Sherman Blvd. As you reach Sherman, to your left is a park with an original segment of the 1926 alignment of US 66:

When cars were slow and didn't have air conditioning, traveling by car in summer was a tiring, dusty and hot business. So Wayside parks with picnic areas were built as rest areas along US 66. The one in Sherman has survived till our days and it also preserves a section of the original 1926 roadbed.

Notice in the satellite view, the curve in the highway and how it opens into two lanes at its northern tip. 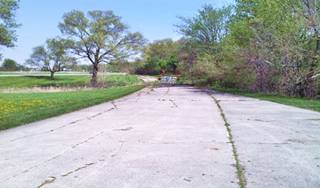 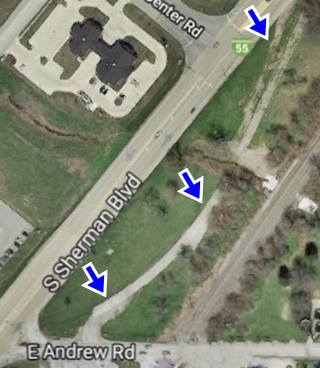 Below is an image depicting the southern tip of the park, looking nort from E. Andrew Rd. The blue arrows mark the 1926 alignment through the park:

Wayside Park, seen from the South in Sherman, Illinois

The Hide-a-way tavern was run by Vern and Nora Wertz Woods. It was the place where the locals danced. R. Fishback ran it after 1938. Now Pat's Repair stands on the property. 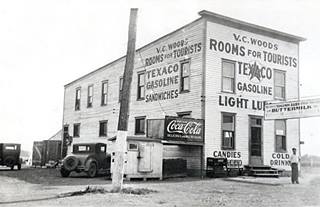 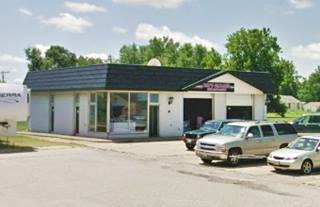 Turn east and cross Sherman Blvd. and the railroad, to your right is a classic from the 1940s:

Built in 1946 from homemade concrete blocks it has been serving drinks to US 66 travelers since then (the days of Rittenhouse).

Head west along Sherman and stop at Carpenter Park to visit a Historic Landmark:

The historical segment starts at Cabin Smoke Trail and ends at the abutment of the Old Iron Bridge on the Sangamon River. It is barely 1⁄4 mile long.

No cars have driven along it since 1936. It is a two-lane road that is 16-feet wide. Built four years before the creation of Route 66 it was included in its alignment as it was paved.

It is a cement and gravel roadway with 4-foot gravel shoulders and four inch curbs.

It was replaced by a wider and straighter alignment to the east in 1936. The bridge across Sangamon River has been removed only its concrete abutments survive.

Read all about the alignments of Route 66 in Sherman in the following report:

Shown in Orange in the Google map.

The first alignment of Route 66 followed was paved in 1922, 4 years before the highway was created. When it was commissioned, in 1926 it used pre-existing Illinois state highways. It ran south along present Sherman Blvd. went through the Wayside rest area, and then took a right, westwards along E. Andrew Rd. until Old Tipton School Rd. where it turned south with a 90° turn along the stagecoach route from Springfield to Peoria.

It ran through present Carpenter Park and across the Sangamon River into Springfield. This last section is shown in Black in the map as you cannot driv it.

This is a Map with directions of the first alignment.

Widened to 4 lanes in the Wayside Park it ran south along Sherman Blvd. to the Sangamon River bypassing the Andrew Rd. section. In 1940 it was improved with the addition of two extra lanes, becoming the 4-lane highway mentioned by Rittenhouse.

The 1970 air view of Sherman shows the different alignments of Route 66 in the area:

The later (post 1930) alignment which became a four-lane divided highway in 1940 is shown with a Blue arrow. To the left, behind Sherman is the Freeway (I-55) marked with a Yellow Arrow. 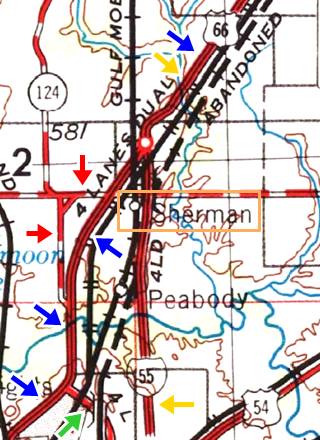 The red arrow marks the 1926 alingment, The 4-lane dual US 66 is marked with blue arrows while the yellow arrows show where the Freeway is.

I-55 north of Sherman ran toghether with US 66.

To the south the Beltway in Springfield is shown with the Green Arrow. Sherman in in the middle of the image (orange box).

> > See the next segment Through Springfield (west)