Nilwood is a small village on the first alignment of Route 66 (1926 - 1930) in Illinois, which here is the Historic Route 66 Girard to Nilwood listed in the National Register of Historic Places.
Nilwood is best known for the Barn with 13-star flag painted on it and the famous Turkey Tracks made in the early 1920s when the highway's concrete was still wet.

Nilwood, Illinois: all about it

Nilwood is located in Macoupin county IL. See this Map of Nilwood.

The History of Nilwood

The first inhabitants of what is now Illinois, arrived when the ice sheets retreated some 11,000 years ago, at the end of the last Ice Age. These Paleoindians were the ancestors of the modern Kickapoo, Illinois and Miami natives that were the historic natives encountered by the first European explorers in the mid 1600s.

Barn with 13-star flag painted on it in Nilwood, Illinois

France claimed the region as part of "New France" (now Canada) but lost it to Britain during the Seven Year War (1763). The independence of America (1776) saw the land change hands again; it became a territory of the U.S.

The first settlers arrived in the mid 1810s and early 1820s, around the time that Illinois gained statehood (1818).

John Woods was the first pioneer in this area; he arrived from Virginia in 1817. Macoupin County was established in 1829 and was named after Macoupin Creek (the word is a Miami-Illinois term for the American lotus Nelumbo lutea).

That same year, John A. Harris became the first settler in Nilwood Township, in "Harris Point". Street opened a general merchandise store in Nilwood in 1831. Farmers grew corn as their main crop and Pitman built a gristmill here in 1838.

The Chicago and Altonr Railroad reached the area in 1852 and the village was platted by Mayo and Braley in 1855. The post office opened the following year and the village incorporated in 1867.

Apparently it came from the engine drivers of the steam locomotives. Wood was used as fuel for the engine's boilers and as there were no trees in Nilwood they named it "Nil" "Wood" (no wood). Later coal replaced wood as the locomotives' fuel.

In 1926 Route 66 was aligned through Nilwood, using the paved alignment of state highway #4. In 1930 it was made shorter with a new alignment further east (present Histroic Route 66 from Springfield to Staunton through Litchfield).

Nilwood, its Hotels and Motels

> > Book your hotel in Springfield

More Accommodation near Nilwood on Route 66

>> Check out the RV campground north of Nilwood

Nilwood has a "humid continental" climate with wet and hot summers (which are quite long) and short but very cold winters -with plenty of snow and bitter wind.

In Nilwood snow may fall for over four months with an average 22 inches (56 cm) of snowfall yearly. Rainfall averages some 35.2 in. (893 mm) yearly.

The countryside near Nilwood is hit by some 7 tornados per year.

Map of Route 66 through Nilwood in Illinois

Route 66 is listed in the National Register of Historic Places on two segments of the 1926 alignment: in Auburn and, here, between Girard and Nilwood.

Barn with 13-star flag painted on it

On the west side of the highway (right) you can see this painted barn with the "Betsy Ross" flag painted on its eastern face, it is pictured below:

The Betsy Ross flag was one of the first U.S. flags designed. It is attributed to Betsy Ross based on a story (most likely apocriphal) pubished in 1870 by her grandson William Canby.

According to Canby, Besty modified the design given to her by a committee (which included George Washington) and used five-pointed stars instead of six-pointed ones.

The 13-star flag painting on the barn is a great example of Americana. It is pictured above at the top of this page.

The first American flag had the 13 stripes that the present flag has (one for each of the original colonies) and also 13 stars (for the same reason). 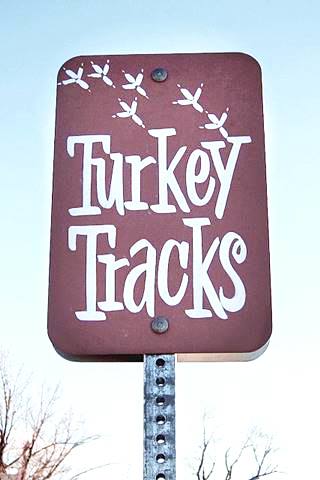 You will see the tracks on the left (eastern side of the road), there is a sign marking the spot (image) and a white square on the road surface to mark the spot. You can't miss it.

Below is a photo of the "turkey tracks", imprinted in the wet cement by a turkey (or turkeys) that walked across it when the highway was built back in the 1920s.

When were they made

These tracks predate Route 66 (created in 1926) because they were made when Illinois Route 4 was paved in concrete in the early 1920s between Chicago and St. Louis something that took place between 1921 and 1926.

However we know that it was paved in 1921 because a contemporary article tells us that "To Carlinville the pavement is all laid with the exception of a short stretch at Thayer... from Carlinville to St. Louis the concrete is all laid..." (Engineering & Contracting, Volume 56. 1921, pp. 468).

Wild turkeys or domestic ones?

They were over hunted and wiped out in Illinois by 1910, and were reintroduced between 1959 and 1967 from Missouri.

This means that there were no wild turkeys in Nilwood Illinois in the 1920s because they had been eliminated by human activities a decade earlier.

The culprit then must have been domestic turkeys from a nearby farm.

Below are two images of the tracks:

A View of the Turkey tracks on US 66 concrete in Nilwood, Illinois

The turkey tracks on US 66 concrete in Nilwood, Illinois

Keep southbound and drive into Carlinville to the south.

Dirt trails used by carts had very deep ruts, which became muddy puddles which bogged cars down when it rained, they had to be improved.

A private association was formed in 1915 to promote the Pontiac Trail as a "solid surface road" to link Chicago and St. Louis MO. Named for the famous Ottawa Indians chief it even had its own highway shield sign (see image).

This state Route 4 was completely paved by 1926 and US 66 -created that same year- ran along IL-4 alignment.

This first alignment of Route 66 south of Springfield had a winding course following the former county lanes and lot demarcation trails. It had many sharp 90° curves. This made it unsafe and also longer. The highway ran between Staunton and Springfield through Nilwood.

The original Illinois Route 4 in this area was paved between 1920 and 1922. This was a period of transition from cart, horse and mule to truck and cars. The old dirt track was replaced by a state of the art highway (by early 1920s standards): it was a concrete highway that had two eight-foot wide lanes and gravel shoulders 7 feet wide. The Portland concrete slab was 6 inches thick.

It has survived the wear and tear for almost 100 years and although it has cracks, it still has its original concrete paving plus the concrete box culverts.

The historical segment runs between Girard and Nilwood. After 1932 IL-4 was also shortened and adopted a straighter course.

The Illinois Division of Highways led by Thomas Sheets moved Route 66 further east to shorten it and eliminate all the winding sections with sharp turns. They aligned it through Mt. Olive and Litchfield and Glenarm. This new route forked off from the original alignment south of Staunton and reunited with it in downtown Springfield; Nilwood had been bypassed..

Original 1926-1930 alignment between Girard and Nilwood

It is a 4.9 mi. drive from Girard to Nilwood, see this Map with directons. The road is marked in Orange in the Google map above.

> > See the previous segment From Virden to Girard (east)

> > See the next segment Nilwood to Carlinville (west)