Carlinville is a city on the 1926-30 Route 66 alignment in central Illinois. The main sights in town are:
The largest collection of Sears Catalog homes in the word, the old Loomis House (St. George Hotel), the castle-like Macoupin County Jail and the "Million Dollar" Macoupin County Courthouse.
For movie fans: the 1928 Marvel Theatre and the 1950s Diane Drive-In.
Two original Route 66 roadbeds: the Original Road Surface (Cemetery) and the Deerfield Drive Segment.

Carlinville, Illinois: all about it

The History of Carlinville

The territory was ceded by France to England after the Seven Year War in 1763, and after the American Independence it became a Territory of the U.S.A, it was admitted into the union as the state of Illinois in 1818.

O.W. Hall settled here in 1817. Macoupin County was established in 1829 and was named after Macoupin Creek (the word is a Miami-Illinois term for the American lotus Nelumbo lutea).

Named for Thomas Carlin, (1789-1852), the 7th Governor of Illinois. When he was a member of the state legislature he pushed for the creation of Macoupin County.

Carlin is common in Ireland and Scotland, the English form of the Gaelic Ó Cairealláin, (the descendant of Caireallan).

The town of Carlinville was founded at the same time (1828). Blackburn College, affiliated with the Presbyterian Church (U.S.A.), was established in 1837.

Route 66 was aligned through the city in 1926 and remaind so until 1930 when it was shortened and realigned to the east, bypassing Carlinville.

Carlinville, its Hotels and Motels

> > Book your hotel in Springfield

More Accommodation near Carlinville on Route 66

>> Check out the RV campground nearby in Springfield

Carlinville has a "humid continental" climate with wet and hot summers (which are quite long) and short but very cold winters -with plenty of snow and bitter wind.

In Carlinville snow may fall for over four months with an average 22 inches (56 cm) of snowfall yearly. Rainfall averages some 35.2 in. (893 mm) yearly.

The countryside near Carlinville is hit by some 7 tornados per year.

Map of Route 66 through Carlinville in Illinois

Below we provide More information on US 66 in Carlinville (the 1926-30 alignment).

Route 66 is listed in the National Register of Historic Places on two segments of the 1926 alignment: in Auburn and from Girard to Nilwood.

Reach Carlinville driving along Historic U.S. 66 or from the freeway I-55 Current State Hwy 4 lies on the original Route 66 alignment. You will enter the city from the north turning righ along Shad Rd and then left along N. Broad St. Just after crossing the railroad tracks, turn left along Rice St. to visit the Sears Catalog homes:

This is the Largest collection of Sears Catalog homes in the whole world.

Sears, Roebuck & Co. began selling their mail order catalog homes in 1909, they came in many sizes and models, they were "kit homes" with all the parts and pieces cut to size. The company sold over 70,000 homes between 1909 and 1940.

In Carlinville, they were built by the Standard Oil Company for coal mine workers. in 1918 the oil company bought 192 kits and ended up building 156 homes in town, of which 152 are still standing.

They were built in a new district, known as "Standard Addition" on the northeastern side of Carlinville.

The Standard Addition Neighborhood Association (SANA) formed in 2014 has plans to restore the area.

There is another Sears kit house on Route 66, the Hogue House in Chelsea Oklahoma, built in 1912 and listed in the National Register of Historic Places (the first house of its kind in Oklahoma and east of the Mississippi River).

Return to Route 66 (N Broad St.) and turn left into the downtown area of Carlinville.

The exhibit has two panels with plenty of information on Carlinville and its attractions; this is its Street View.

As you enter the town's main public square, notice its Red Brick Paving. Look to your left on the "East Side of the Square", there, on its northeastern corner is an 1870s hotel:

Thaddeus Loomis was wealthy a local land owner who in 1861 was elected as county judge. He worked from the courthouse built in 1830 but by 1865 Loomis considered that it was too small for his needs, so he commissioned a new one appointing Elijah E. Meyers as architect and threw into the project the new county jail.

Loomis was involved in the Macoupin County's "Million Dollar Courthouse" scandal back in 1869.

Loomis had a hotel designed for him by E. E. Meyers. on the town's main square: Loomis House, it opened in 1870 as a hotel with 50 rooms and it was built in the same limestone that was used in the County Courthouse.

Later Loomis lost it as he foreclosed on the mortgage, and it became the "Saint George Hotel". Below is a "Then and Now" sequence of the building that saw the 1926-30 Route 66 traffic drive past it.

As you reach the middle of the western side of the square, turn right along West Main Street (also paved in red bricks) to visit a Classic Movie Theater:

This theatre, pictured below, is located on the NE corner of Main and N Plum St. (to your right). It opened in 1920 and was owned by the Paul family. After burning down in 1926, it reopened in 1928 and kept screening movies until 2014. It reopened recently.

Its current marquee is from the 1960s. 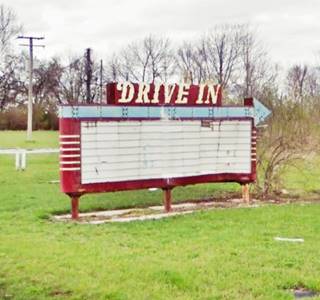 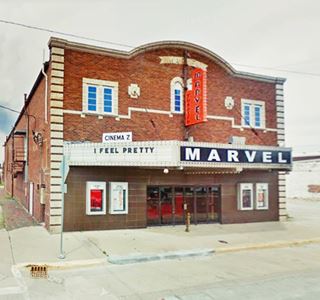 Keep heading west along Main (IL-108) for 1.8 miles -see this Map with Directions and visit a classic Drive-In.

The drive-in theater opened in 1952 and belonged to the same family that owned the Marvel Theatre. It could fit 300 cars and remained open until 1981. It is still there, slowly decaying. See the picture of its neon sign above.

Turn around and retrace your steps to the city's square, turn right and thd rive around the square; turn left along E 1st St. (IL-108 and IL-4) just ahead is the Famous Courthouse:

The Macoupin County Courthouse is known as the "Million Dollar Courthouse" (it actually cost over $ 1.3 Million in 1870 dollars, which is roughy equivalent to $24 million today).

The project promoted by Judge Loomis was budgeted in 1865 at $50,000. A bond was issued and a levy was established to gather the necessary funds. But as time passed the costs rose and by 1869 the project had swallowed almost $ 450,000, and the building was not yet finished -lacking its roof and dome.

Corruption charges were brought against Judge Loomis and the County Clerk and also partner in Loomis' hotel, George Holliday.

The building was completed in 1870 at a cost of $1,342.000.00. A committee was created to investigate the charges and both Loomis and Holliday resigned. But Loomis was later cleared and Holliday vanished from Carlinville without a trace.

The tremendous debt caused by the Corthouse building was repayed over the next 40 years: the final bonds were paid off in 1904.

In 1870, when it opened it was the largest courthouse in the country and is still in use.

Across the street from the County's Courthouse is the old County Jail (to your right):

This castle-like county jail pictured below was designed in Gothic Revival style by E. E. Mayers (who had designed the courthouse and Loomis' Hotel) in 1867 and completed two years later.

It looks like a castle from the Middle Ages and is known as the "Cannonball Jail" because it was built using embedded cannon balls in the stone walls.

It was built to hold 17 inmates and remained in use until 1988 when it closed. It is closed to the public but there are plans to renovate it and reopen it.

There is a 1950s motel on the SW corner at the junction of IL-4 and E 1st Street. Turn left along IL-4 and head south. 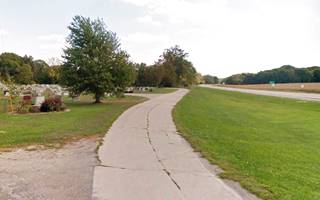 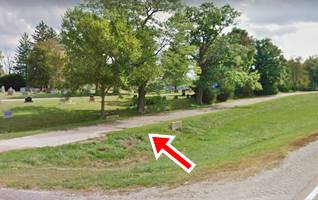 Just ahead, and also to your left (500 yards away) is yet another section of the old narrow roadbed, it is pictured above (red arrow).

Continue south towards Gillespie and after 4.1 miles is an "original section" along Deerfield Drive that curves around the modern (1932 alignment) to the west and then to the east at Honey Creek. This is a Map with directions.

The "Pontiac Trail" was born due to ehte growing use of cars during the early 1910s: roads were in poor condition and were suitable for carts and horses, not for automobiles.

A private association was formed in 1915 to promote better roads, and in particular the "Pontiac Trail", a projected "solid surface road" that would link St. Louis with Chicago.

The association named it after the well known Ottawa Indian chief. They secured the support of the B.F. Goodrich tire company to mark its mile posts and they even designed its own shierld (image).

The state of Illinois' government took over and issued a bond in 1918 which created the State Bond Issue (SBI) Highway No. 4 which was more or less aligned along the Pontiac Trail.

This first alignment of Route 66 south of Springfield had a winding course following the former county lanes and lot demarcation trails. It had many sharp 90° curves. This made it unsafe and also longer.

Marked in Pale Blue in the map above.

Seeking a straighter alignment the Illinois Division of Highways led by Thomas Sheets moved Route 66 eastwards through Mt. Olive and Litchfield and Divernon.

The 1930's alignment branched off from the older one in Staunton and reunited with it further north, in Springfield. It bypassed Carlinville.

The 1926-30 road from Nilwood to Carlinville

It is a 12-mile drive between both towns, see this Map with directions.

> > See the previous segment From Girard to Nilwood (east)

> > See the next segment Carlinville to Gillespie (west)