The village of Williamsville has the following attractions: the Williamsville Public Library and Museum with a great "distances-to" sign in front of it, the typical nostalgic & vintage Hilarious Route 66 Gas Station; the Williamsville Railroad Depot and Box Cars and the classic Fawn’s Standard Service Station.

1926 US 66 in Illinois South of Williamsville

The Main Alignment of Route 66 (after 1940) at Williamsville

Williamsville, Illinois: all about it

Williamsville is a village in the north of Sangamon County, Illinois, on Route 66.

This is a Map of Williamsville.

The History of Williamsville

The central part of Illinois has been inhabited for at least 11,000 years, the rivers of this region were explored by French trappers in the mid 1600s, but only during the first years of the 1800s did settlers move out to the vast prairies.

Founded as Benton in 1853 when the railroad reached the area (after the U.S. sentator from Missouri Thomas H. Benton). The name was later changed to Williamsville and incorporated in 1884.

The town was named to honor Col. John Williams (1808-1890) a Springfield merchant. He fought with Abraham Lincoln in the Black Hawk War (1832) and they became close friends.

Williamsville, its Hotels and Motels

> > Book your hotel nearby in Springfield IL or
Lincoln

More Accommodation near Williamsville on Route 66

Hotels to the East, in Illinois

Find your hotel in neighboring Springfield

The weather in Williamsville

The climate in Williamsville is humid continental one with humid hot summers and cold winters.

About 7 tornados hit Sangamon County (where Williamsville is located) each year.

Map of Route 66 through Williamsville, Illinois

See the alignment of US 66 in Williamsville, on our Illinois Route 66 Map, it has the complete alignment across the state with all the towns along it.

This is the color key for Williamsville:

Pale Blue:it is the Historic Route 66 alignment (1940-77) or Bypass alignment.
Green is the 1926-1940 Route 66, and after 1940, the "Spur" through Williamsville
Gaps in alignment, is I-55, where it overlaps the old alignment.
Brown: Bypass or Beltway 66 in Springfield
Orange: the 1926-32 aligment into Springfield and the 1926-30 alignment from Springfield through Staunton.
Black: missing segments.

Below we provide More information on US 66 in the neighborhood of Williamsville.

Things to see in town

In 1946, researching for his classic Guidebook of U.S. 66, Jack Rittenhouse drove the Mother Road from Chicago to L.A., he mentions Williamsville:

It is evident that he drove along the "Bypass" 66 as the town was off to the left.

Drive through town from north to south: 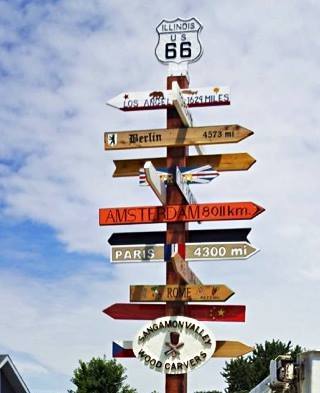 To your right is the library with its great "distance-to" sign. It is brand new and has an interesting collection covering local history.

Elm Street was the original 1926 alignment through Williamsville until the 1940 "bypass" was built further west.

Ahead, to your right is the now closed "Hilarious Route 66 Gas Station":

Also known as "Old Station", it is a 1930's gas station with vintage gas pumps and classic signs from the "old days". A great place for a photograph. It is now closed (since 2016) and up for sale.

Ahead, to your right, on the corner of Elm and Main, are two brown Historic route 66 road signs, one points right to the "main" (Bypass) alignment the other points ahead to the "spur". Across the street is the old Railway depot:

The original depot was built in 1854. There is a wayside exhibit with two Union Pacific box cars and some US 66 mementos. This is its Street View.

To your left, along Main Street, crossing the tracks is the Downtown:

On Main and Pine (NE corner) is an interpretative sign on the SW corner is another one. See its Street View.

Drive south either along South Elm or along the "Bypass" 66 (Old Route 66) to see the old Fawn’s Service Station:

This was the location of Fawn’s Service Station and the now gone Route 66 Café it was at the southern tip of Williamsville bypass.

In 1945 Wilbur Fawn bought the Standard Oil service station that had been owned by Fran Finch since 1941 he added a tow truck. The building is still standing, with a two-door garage. It had three pumps. See Another Vintage photo of the gas station.

Below is a "Then and Now" sequence of the building, which is quite unchanged:

Fawn’s Service Station (when it belonged to Finch) in Williamsville, Illinois

This is the end of your tour in town. Turn back and head to the Freeway to continue south towards Sherman or use the old Route 66 northwards to reach Elkhart.

The first alignment of Route 66 entered the town along Elm St. and then ran parallel to the railway south into Sherman. It is shown in Green in the Google map. 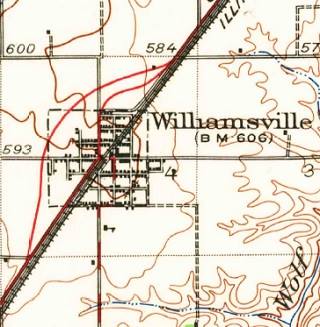 A safer alignment was needed (acccidents in the towns were increasing), so a bypass was built around the town.

As you can see in the 1940 USGS map of Williamsville, Route 66 opened into two alignments at Williamsville, one went through the town (the original 1926 alignment), the other newer one, around it. Each was a 2-lane highway both met to the south of town, where Finch would build his gas station the following year (later Fawn's Standard Oil gas station).

During WWII the whole of US 66 began improving and a four-lane freeway began being built. It was finished in the early 1950s, before the Internet system was implemented.

The 1958 USGS map of Williamsville shows all the traffic heading down the main "Bypass" alignment. I-55 would later be built to the west of this four-lane divided highway.

It was then that the road through the downtown area became the "Spur" alignment, shown in Green in the map.

From Northern side of Sherman (where Sherman Blvd. meets the northbound lanes of I-55) to Williamsville the alignment of Route 66 is now beneath the freeway so we have marked it in Red in the Google map.

From Williamsville to Sherman

A 6.7 mile drive using the W. Frontage Road to maximize your drive on US 66 in Sherman. This is a Map with directions.

> > See the next segment Through Sherman (west)