Auburn is located on the original 1926 to 1930 Route 66 alignment in Illinois, its attraction is the Historic Brick Road; and you can also stop at Becky’s Barn, located on Aburn's Brick road.

Auburn is located in Sangamon county and this is a Map of Auburn.

The History of Auburn

The first inhabitants of what is now Illinois, arrived when the ice sheets retreated some 11,000 years ago, at the end of the last Ice Age. These Paleoindians were the ancestors of the modern Kickapoo, Illinois and Miami natives that were the historic natives encountered by the first European explorers in the mid 1600s.

France claimed the region as part of "New France" (now Canada) but lost it to Britain during the Seven Year War (1763). The independence of America (1776) saw the land change hands again; it became a territory of the U.S.

The first settlers arrived in the mid 1810s and early 1820s, around the time that Illinois gained statehood (1818).

In 1821, Sangamon County was established. It was named after the Sangamon River, which runs through it. the word Sangamon may be a Pottawatomie native word (Sain-guee-mon = "where there is plenty to eat") or a name given by the French explorers (St. Gamo: Eighth century Benedictine monk. Abbot at Noyon, France; he expanded the monastic movement and was a patron of the arts).

It was founded in 1835 one mile north of its present location by Thomas Eastman and sons. The post office opened in 1838 as Sugar Creek but changed a few months later to Auburn.

When the Alton and Sangamon Railroad was built in 1853, the town relocated to its present location by the station then named Wineman, which had been founded by Philip Wineman. This led Asa Eastman son of Thomas to buy Wineman and rename it Auburn.

Thomas Eastman's daughter Hannah named it for their former hometown Auburn in Androscoggin Maine. Which in turn was namedi after the fictional English village of "Auburn" mentioned in the 1770 poem "The Deserted Village" by Oliver Goldsmith (1728-1774), a critique to the Industrial Revolution. Although it comes from Latin "albus" (white) it morphed to "brown" because 16th and 17th centuries the color was often written abrune or abroun.

Route 66 was aligned through the city following the frist State Highway, SBI 4, in 1926, but it was short lived as in 1930 it was shortened and made straighter, realigned to the east through Litchfield, bypassing Auburn.

Auburn, its Hotels and Motels

> > Book your hotel nearby, in Springfield IL

More Accommodation near Auburn on Route 66

>> Check out the RV campground nearby, in Springfield

Auburn's climate is a "humid continental type", its summers are humid, long and hot. Its winters are short, very cold, with a lot of snow and quite windy.

The are around Auburn may get around 7 tornado strikes each year.

Map of Route 66 through Auburn in Illinois

Route 66 is listed in the National Register of Historic Places on two segments of the 1926 alignment: here in Auburn (read on below) and from Girard to Nilwood.

The "Historic Brick Road" listed in the National Register of Historic Places actually consists of two separate road segments. The original brick road and another separate "Concrete segment". We describe both of them below:

It is a 1.5 mile-long portion of highway which was originally built as State Route 4 in 1921. It served as Route 66's original roadbed from then until 1930, when US 66 was realigned further east, between Springfield and Staunton via Litchfield and Mount Olive.

After Route 66 was relocated eastwards in 1930, this segment became Route 4 once again.

In 1932 Route 4 was also straightened out, adopting its current diagonal course, and the Snell & Curran Roads segment which were bypassed, were repaved with bricks: becomint the now famous "Auburn Brick Road".

The image below shows a detail from the 1924 USGS map of Snell Road north of Auburn. The red line marks what then was State Highway 4. Which curved to the south along a now abandoned section of road (red arrow) and then curved 90° west along Hambuch Rd. continuing along Snell Rd. and taking another 90° turn south, towards Auburn. This section was paved as the map marks it in red.

The later alignment, built after 1932 is shown with the dashed blue line and it has a diagonal course from NE to SW.

Note that in 1924 Snell Rd. didn't have its present curve into Curran Rd. (left side of image) which was surely built in 1932 when it was resurfaced, following the trend of the time to eliminate 90° turns. 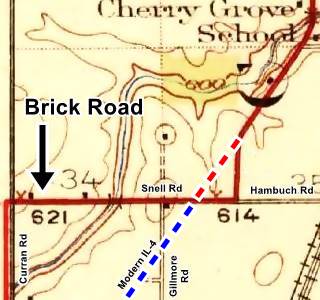 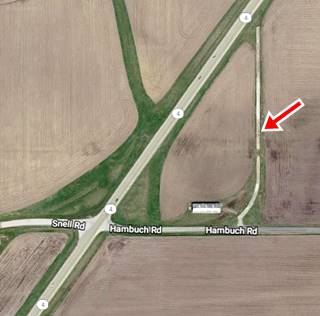 The image above shows this original concrete paved segment between modern IL-4 and Hambuch Rd (red arrow). Notice how it curves into Hambuch. Below is a photograph of its intersection with Hambuch Rd. and the curve:

Just 1.7 miles north of the historic brick road is another historic segment of Route 66 (Map with directions).

This road section, currently Alpha Road, was built in Portland cement in 1921 and consists of a 1,277 foot-long, 16 foot wide section of highway built as Route 4.

The state highway was realigned in 1932, eliminating the two 90° turns and replacing them with a softer "S".

Below is the 1924 USGS map of the road and its present satelite view, the red arrows show the now abandoned sections. The dashed blue line is the present alignment built in 1932, and the blue arrow is the surviving concrete roadbed. 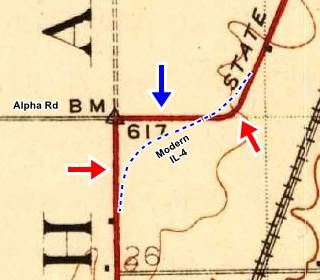 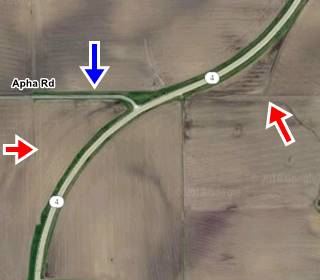 Dirt or gravel roads in the countryside and the cities were problematic even during the horse drawn cart age: They were uneven, the wheels created ruts that filled with water forming puddles when it rained. Mud slowed down traffic for days until it finally dried.

Stone cobbles were expensive to shape and transport because they were not always available locally. The same can be said about gravel.

Virgil Gates and Mordecai Levi were granted a patent (No. 285,746) in 1883 for their method of building brick pavement roads. Bricks were easy to make, light and provided a good road surface. They became popular in the late 1800s and early 1900s.

Initially they were laid on the soil with a sand cushion below and the joints filled with sand. This was inadequate because water passed in between the bricks through the sand joints and loosened the sand bed below.

The solution was to build a concrete foundation, lay a sand cushion on it, place the bricks close together and fill the spaces with a bituminous cement.

Glazed bricks were chosen because they were very durable, also known as vitrified bricks they were impervious to water and corrosion.

They could expand and contract without cracking due to the space around them.

In the case of State Highway 4, you can stil see, on both sides of the road a 10 inch concrete curb. They formed part of a "U-shaped" concrete foundation, the hollow to be filled with the bricks, sand and asphalt.

In Illinois, the "Tice Act" (1913) required permanent brick roads and this was due to the effective lobbying by Illinois brick manufacturers.

The image below shows a group of workers laying bricks in Illinois in the early 1920s. Note the concrete curbs on each side, the bituminous base and the men laying the bricks:

Road building crew laying bricks ca.1920s in Illinois, on a bituminous base.

Some road workers became famous, one of them was "Indian Jim" (James Garfield Brown) of Kansas who was the "Champion brick layer of the United States" having set 218 tons of bricks in less than 7 hours.

Indian Jim actually worked for the McCarthy Improvement Co., of Davenport Indiana, who in 1933 was in charge of a resurfacing job on Route 5 between Chatham and Abuburn. He could lay 1,600 sq. yards per day all by himself.

The working crews consisted of three brick laying gangs with one mastic crew, one rolling crew, one culling crew and a filler crew.

You can see other urban streets paved with bricks along Route 66 from Illinois to Texas: such as the Amarillo TX brick street, the Shamrock TX street paved with bricks and the Davenport OK, Historic Brick Paved Broadway St.. Close by, in Illinois, in Edwardsville, IL there is a brick surfaced street.

As you drive along Snell Rd. on the Brick highway, to your left is this local attraction. This antique store sits next to the original 1930s brick road. Beck Hargett, co-owner, passed away in 2015. Its worth a stop.

This marks the end of your tour through Auburn, so head south into the town and continue your journey along the 1926-30 Route 66.

Dirt trails used by carts with deep ruts, which became muddy traps during the rainy periods were not suitable.

A private association was formed in 1915 to promote the Pontiac Trail which became a "solid surface road" that linked Chicago with St. Louis. It was named for the famous Ottawa Indians chief. The B.F. Goodrich tire company marked its milage posts with its custom shield sign (see image).

The state government took over and issued a bond in 1918 which created the State Bond Issue highway 4 (or SBI-4) which mostly followed the original Pontiac Trail.

This first alignment of Route 66 south of Springfield had a winding course following the former county lanes and lot demarcation trails. It had many sharp 90° curves. This made it unsafe and also longer. The highway ran between Staunton and Springfield (Orange in the map above).

Marked in Pale Blue in the map above.

Seeking a straighter alignment the Illinois Division of Highways led by Thomas Sheets moved Route 66 eastwards through Mt. Olive and Litchfield and Divernon.

This new alignment branched from the previous alignment south of Stanton and reunited with it in Springfield. Auburn had been bypassed.

The 6.8 mile trip from Chatham to Auburn is shown in this Map with Directions. It is marked with an Orange line in the Google map above.

In Auburn, the road followed Lincoln St. then south along modern IL-4 and west along a now vanished westward extension of W. North St. then it turned sharply south along Panther Creek Rd. and continued south on IL-4.

> > See the previous segment From Springfield to Chatham (east)

> > See the next segment Auburn to Thayer (west)