Benld is a town located on the original 1926 to 1930 Route 66 alignment, it is the site of the Coliseum Ballroom which burned down in 2011. The Route 66 statues and kiosk commemorate the old ballroom.
South of town is the Original 1920s concrete road surface of US 66.
You can also visit the 1915 The Holy Dormition of the Theotokos Orthodox Church, here in the town where the Benld Meteor fell.

Benld, Illinois: all about it

Benld is a city located in Macoupin county and this is a Map of Benld.

The History of Benld

The territory was ceded by France to England after the Seven Year War in 1763, and after the American Independence it became a Territory of the U.S.A, it was admitted into the union as the state of Illinois in 1818.

The first settler in the region was John Woods, who came from Virginia in 1817. Macoupin County was established in 1829 and was named after Macoupin Creek (the word is a Miami-Illinois term for the American lotus Nelumbo lutea).

It was a farming area until Mr. Dorsey, an early settler platted the town (he also had the coal mining rights) in the late 1880s. It was formally founded in 1903 and the post office opened in 1904.

The name combines the letters from the town's founder's name: Benjamin L. Dorsey.

Route 66 was aligned through the city following the frist State Highway, SBI 4, in 1926, but it was short lived as in 1930 it was shortened and made straighter, realigned to the east through Litchfield, bypassing Benld.

Benld, its Hotels and Motels

> > Book your hotel in Staunton

More Accommodation near Benld on Route 66

>> Check out the RV campground nearby in Douglas

Benld has a "humid continental" climate with wet and hot summers (which are quite long) and short but very cold winters -with plenty of snow and bitter wind.

The countryside near Benld is hit by some 7 tornados per year.

Map of Route 66 through Benld in Illinois

Route 66 is listed in the National Register of Historic Places on two segments of the 1926 alignment: in Auburn and from Girard to Nilwood.

Reach Benld driving along Historic U.S. 66 or from the freeway I-55 (Exit 44 and then IL-138 from Mt. Olive). Current State Hwy 4 lies on the original Route 66 alignment.

A meteor hit Benld on September 29, 1938, striking the garage of Edward McCain, making a hole in its roof and striking his 1928 Pontiac Coupe.

The meteorite embedded itself in the upholstry of the back seat of the car. It weighed 3.9 lb (1.771 g).

You can see both meteorite and parts of the car at the the Field Museum of Natural History in Chicago.

Drive into Benld along the "Hard road" (IL-4), from the north, coming from Gillespie, and as you enter the town, to your left is a Route 66 wayside kiosk and statue: 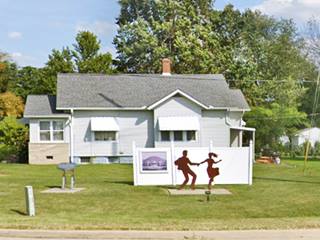 Located on the SE corner of the intersection, the kiosk has a steel shilouette depicting two 1950s dancers enjoying themselves at the now gone Coliseum Ballroom.

The kiosk's display panel is entitled "Dancing the Night Away" and has images of the old ballroom and a flyer with Tina Turner on it.

On the next corner, turn left for a very short side trip (1.4 mi round trip - see this Map with directions) to visit an onion-domed Orthodox Church built in 1915: 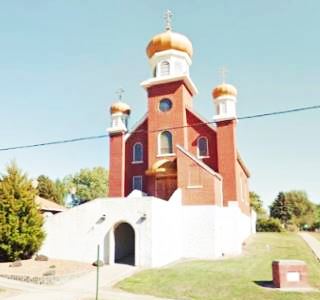 The Holy Dormition of the Theotokos Orthodox Church

The local parish was organized back in 1907 when there were many Eastern European imigrants working in the mines around Benld. But later the mines closed and workers moved away so attendance dropped.

The church rules state that an unused building must be torn down but the church officials saved it by converting it into a monastery.

The Holy Dormition is a Russian Orthodox Church of the Moscow Patriarchate and was built in 1915 when the original wood church burned down.

Retrace your steps back to Route 66, turn left (south) to visit the remains of a Route 66 Icon: the Coliseum Ballroom, just one-half mile south: 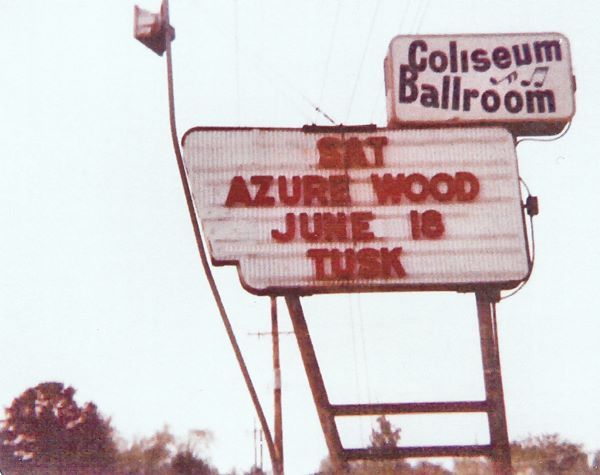 Fats Domino, Tina Turner, Chuck Berry, Tommy Dorsey, Duke Ellington and Ray Charles were some of the celebrities that performed there. During its last years it was the venue for antiques sales.

Below is a view of the site, now vacant except for the neon sign (pictured above during its heyday) an below, too:

Coliseum Ballroom Site (it burned down in 2011) in Benld, Illinois

Ahead, to your left, at Fisher St. ⁄ Sawyerville Hills Rd., is the small village of Sawerville:

Sawyerville is a small village in Macoupin County located next to Beld, on its southern side (Map of the village). It is just east of Route 66's 1926 alignment. It was named for Thomas Sawyer, a resident who sold part of his property to the Superior Coal Co. in 1904. The company founded the village in 1905, which incorporated two years later.

The town's main attraction is its water resevoir. Route 66 passed by it.

Just 0.4 miles south of Sawyerville, to your left is an Old Segment of Route 66:

This is a short segment only 0.3 miles long, with the original paving of the 1920s Route 66: it is a narrow concrete highway, formerly IL-4 later Route 66. The famous "hardroad" now named Fritz Rd. Map with directions.

Notice the concrete "curbs" on both sides of the main concrete slab. Similar to the Modified Bates design used in the 1929 US 66 in Arcadia, OK.

This ends your tour through Benld. Now drive south into Staunton to continue your tour along Route 66.

Dirt trails used by carts with deep ruts, which became muddy traps during the rainy periods were not suitable.

A private association was formed in 1915 to promote the Pontiac Trail which became a "solid surface road" that linked Chicago with St. Louis. It was named for the famous Ottawa Indians chief. The B.F. Goodrich tire company marked its milage posts with its custom shield sign (see image).

The state government took over and issued a bond in 1918 which created the State Bond Issue Route 4 (SBI-4) which was more or less aligned along the Pontiac Trail.

This first alignment of Route 66 south of Springfield had a winding course following the former county lanes and lot demarcation trails. It had many sharp 90° curves, which made the road longer and hard to drive.

This new alignment is shown in Pale Blue in the map above.

Seeking a better alignment the Illinois Division of Highways shifted Route 66 to the east, aligning it through Waggoner, Litchfield and Mt. Olive.

This 1930 road split from the 1926 one on the southern side of Staunton and met it again, in Springfield, Benld was bypassed.

It is a 2.9 mile drive from Gillespie to Benld; see it in this Map Benld-Gillespie.

South of Benld it is 6 miles to Staunton: Map Benld-Staunton.

This alignment is marked with an Orange line in the Google map above.