Livingston, is a small village that became part of the 1940-1977 Route 66 alignment. It has its Kitschy Pink Elephant Antique Mall with giant sculptures and muffler men.

The Main Alignment of Route 66 (after 1940) at Livingston

Livingston is a village in the northeastern section of Madison County, Illinois. (Map of Livingston).

People have lived in what nowadays is the state of Illinois for over 11,000 years, since the last Ice Age ended. To learn more about the early history of Madison County, click here.

The community formed around the railroad depot in the early 1900s. Ant it incorporated in 1905. Its economy was based on the local coal mines despite being in a farming area.

It was named for David Livingston, a member of the family that owned the land where the town was platted.

It was the village where the workers of the New Staunton Coal Co. lived. The company closed during the Depression in 1930, but the nearby Mount Olive Coal Co. opened in 1932, creating job openings. At that time the population was 1,445 and since then it has almost halved.

Accommodation and hotels in Livingston

> > Book your accommodation nerby in Staunton

More Lodging near Livingston along Route 66

More motels and Hotels close to Livingston and Route 66

>> Check out the RV campground in neighboring Douglas

The Weather in Livingston

Seasons in Livingston: summers are long, warm, and humid; winters are short, freezing, and windy. Temperatures may vary on average between 21°F (-6°C) to 86°F (30°C).

Livingston may be hit on average by 7 tornados every year.

Map of Route 66 through Livingston in Illinois

See the alignment of US 66 in Livingston, on our Illinois Route 66 Map, it has the complete alignment across the state with all the towns along it.

Route 66's alignment in Illinois: the Historic Route 66 through Livingston

Here is More information on US 66 as it goes through the town of Livingston.

Reaching the town of Livingston

You can reach Livingston by driving along Historic Route 66. The freeway I-55 links it with Springfield to the north and St. Louis to the south.

Landmarks and Places to See in the village

In his 1946 classic guidebook to US Highway 66, Jack Rittenhouse described it as follows: "US 66 barely touches the eastern edge of LIVINGSTON (Pop. 1,115). Gas station on highway". He mentions the junction four miles west that leads to STAUNTON; (Which is IL-4) here there was gas, cafes and a few cabins followed one mile away by Nelson's Tourist Court which had a gas station. Two miles east of Livingston you could see, half a mile to the west, the "workings of the Mount Olive and Stanton Coal Co.".

In 2004 the last graduation took place at the old Livingston High School. The empty building became the "Pink Elephant Antique Mall" which is on a once very busy intersection where the traffic from Route 66 stopped at the Standard Oil gas station mentioned by Rittenhouse.

When the four-lane divided highway was built (now I-55) that junction was cut off. The new exit was created and the service station moved to the new exit (Meyers Service).

The mall is well-known for its gigantic kitsch sculptures: the Pink Elephant, A male swimmer a huge Ice cream cone and more!

This is the "statue" of the Pink Elephant at the Antique Mall in Livingston, Illinois

Nothing remains of Route 66 in town. There is a later motel on the north side at the freeway's exit, and some signs of Historic 1940-1977 Route 66 (image below). But nothing else has survived. 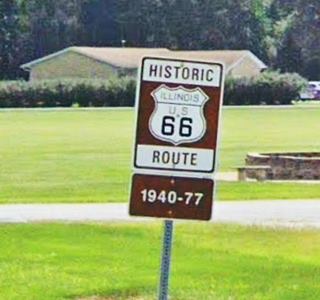 The first alignment of Route 66 followed State Higway No. 4 from Hamel, eastbound. It turned to the north at present Exit 33 of I-55, where the access to Worden is located. And continued northwards into Stanton and from there along IL-4 onwards past Sawyerville and into Bendl. It didn't even touch Livingston.

This is shown in Orange in the map above.

This is a map with directions with the 6 mi. drive from Exit 33 into Staunton.

The Illinois Division of Highways led by Thomas Sheets moved Route 66 east from Farmersville in the east, through Litchfield, and Mt. Olive.

This too bypassed Livingston. It branched from the previous alignment just south of Stanton, coursing around the town's eastern side with a northeastern tack. North of present Exit 41 on I-55 it turned north and then once more it took a NE course into downtown Mt. Olive.

Shown in Blue in the map.

The USGS map shown below was printed in 1932 and it shows Route 66 to the west of Livingston:

This alignment is now buried beneath the freeway east of Exit 33 on I-55. It resurfaces on the eastern side of Livingston but only appears with its original surface at Exit 41, where it heads north, to bypass the town of Mt. Olive along its western and northern sides.

The original road gave access to town along Livingston Ave. wich was cut off when I-55 was built and the exit moved a quarter of a mile east to Exit 37.

The 1954 USGS map of the area shows a "4 Lane" US 66 and the present frontage road running along it, which has survived as the current frontage Rd. This alignment is shown in Pale Blue where you can drive it, otherwise it is Black if cut off or Red where it is covered by the freeway.

> > See the next segment In Hamel (west)