The Main Alignment of Route 66 near Wildwood

The town of Wildwood is located on the original 1926 -1932 alignment of Route western in St. Louis County, central-eastern Missouri. (Map of Wildwood).

Easter Missouri has been inhabited for the last 10,000 years. In 1683, French exporers from Canada reached the area and encountered Algonquin natives who called themselves "Illiniwek" (meaning "men" in their own language); they were hunters and also grew crops of beans, corn and squash. They were named "Illinois" by the French.

The territory was named Louisiana after the French King, Louis IV. Laclede and Chouteau founded St. Louis in 1764. In 1803 France sold the territory to the U.S., and shortly after, settlers began arriving.

St.Louis incorporated in 1809 and in 1813 the US government established the Territory of Missouri, which became a state in 1821. In 1830s the Native Illiniois and other tribes were forcibly relocated to reservations in Oklahoma to make room for European settlers.

The main "State Road to Jefferson City", linking St. Louis with the state capital was built through here, and a stagecoach ran along it (now MO-100 and US-50). Small communities sprang up around the taverns, inns and stores, and some of these villages (Grover, Pond, Fox Creek, Hollow), were located on the new highway that was created in 1926: Route 66.

Named after the forests that cover the hills in the area, it dates back to 1995.

Route 66 passed through the area until 1932, when it was realigned to the south through Eureka and Pacific. The City of Wildwood is far more recent, it incorporated in 1995 and therefore has no relationship with US 66 during its heyday. However, four out of ten small communities that united to form the city, do have a common history with Route 66.

Accommodation and hotels in Wildwood

> > Book your accommodation nearby in Wildwood

More Lodging near Wildwood along Route 66

More motels and Hotels close to Wildwood and Route 66

Hotels, to the South in Missouri

Book your room in Wildwood

Wildwood has four well marked seasons. It is located in the area where humid continental climate shifts towards a humid subtropical climate, so summers are hot and humid while winters are cold. It gets cold Arctic air and hot damp tropical air from the Gulf of Mexico. Spring is wet and may have extreme weather (tornados, thunderstorms and even winter storms). Fall is sunny and less humid, with mild weather.

The town is located in Missouri's "Tornado Alley" and St. Louis County has around 7 tornados each year.

Map of Route 66 in Wildwood, MO

Check out Wildwood on our Map of Route 66 in Missouri, with the complete alignment and all the towns along it.

Below is the color key for Route 66’s alignment in Wildwood:
Orange marks the 1926 to 1932 alignment of Route 66 from St. Louis to Gray Summit right through Wildwood.
Pale Blue, west of Gray Summit, is the 1926 to 1953 Route 66.
To the south of Wildwood, and east into St. Louis, it is the later (1932-1977) alignment that bypassed Wildwood.
Blue shows other original roadbeds of Route 66's 1926 to 1977. And the Black segments show the orginal but now gone parts of the old road. Check the details provided for each town to learn more.

Map with the alignment of Route 66 through Wildwood

Route 66's alignment in Missouri: the Historic Route 66 through Wildwood

Wildwood and its Route 66 attractions

The the WPA travel guide "Missouri, a guide to the "Show Me" state" published in 1941 only mentins Pond, which had 150 residents and was settled in 1815: "was named after and adjacent millpond" and the nearby Dr. Edmund A. Babler Memorial State Park, for hiking and camping.

Jack DeVere Rittenhouse's 1946 classic "A Guide Book to Highway 66" did not mention Wildwood as it was not on the then current Route 66 alignment.

We will describe the sights related to Route 66 heading west from Ellisville towards Gray Summit, through the small hamlets of Wildwood. The 1954 USGS map shows the highway west of Ellisville as running through open countryside, it wasn't urban or suburban as it is today.

There is a section formerly part of Route 66 which was cut off, when MO-100 was made straighter. It runs along Ruck Road and is a dead end. This is its its map with directions. The Map above shows this segment in Pale Blue and the now gone roadbed in Black.

Just ahead is Gover centred in the classic days a few blocks east and west of Eathanerton Rd., where there were some houses. No Route 66 attractions remain. Head west and you will reach some buildings around Pond Rd. that made up the hamlet of Pond:

This hamlet is located at Pond Road and Old Manchester Road. The land was originally owned by John Brockman in 1835, later Cyrus Speers owned a tavern and store here, the place was known as Speers Pond (the pond is just north of the village), later Drienhofer, a German, bought the land and more Germans settled there. 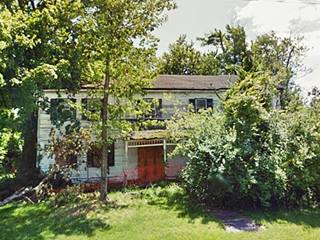 The stagecoach ran along Manchester road and stopped at the Pond Hotel build ca. 1840s, on the site of Brockman's store. It became a post office in 1878 and a hotel in 1911.This was a popular place for cyclists (a restaurant operated here until the 1950s) and there is a Monument beside it:

At the western tip of the Pond Hotel's front garden. Erected by the St. Louis Cycling Club (STLCC) founded in 1887 and the oldest consistently active cycling club in the US. This is its Street View.

To the left, across the road from the Pond Hotel is Pond Inn :

On the SE corner of Manchester and Pond Rd.

Also known as Pond Hall, originally a Tavern (1875), by 1910 William Kesselring owned a store and bar here, and the "Kesselrings Hall and Grove" also known as "Wayside Inn" and also as "Pond Inn". The building still stands today, and this is its Street View. 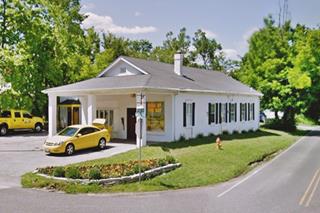 Kern Service Station was built ca.1925. by John A. Kern who had a wagon shop here (he was a blacksmith) who adapted to the automobile as his business declined. Nowadays it is a store, but the canopy over the now gone pumps is clearly visible.

Just 0.3 miles ahead, to your left, on the south side of the road is the historic Big Chief Restaurant:

Nowadays it is the Big Chief Roadhouse. This Spanish Mission Revival styled building opened in 1928, and was known as the "Big Chief Hotel" or "Chief's Cabin Hotel" and the "Big Chief Dakota Grill". At one time a false steeple crowned the building, but it was removed in the 1950s. See "Then & Now" Photos of the Chief Hotel at the top of this page.

It wasn't a hotel though, it was a "cabin hotel", with 62 cabins, each with its garage with hot and cold water showers. The front arched canopy served as a Conoco gas station.

It remained popular after Route 66 was realigned because it hosted dances and was a venue for conferences. The restaurant closed in 1949. The cabins were demolished later. But in the 1990s the Restaurant reopened.

After 0.7 miles, The road curved sharply to the south and, one mile further on, went through the hamlet of Fox Creek:

It has a few homes and is located on the original Route 66 alignment, which here is Manchester Rd and not MO-100. The place is named after a very large fox shot here during its early days, when Josiah McClure from Kentucky settled here in 1819 and the remains of his home and the McClure cemetery are still there. The post office opened in 1851. There was a skirmish here on March 7, 1862 during the Civil War, which turned back a Confederate incursion.

From here, the old highway meandered towards the southwest reaching Hollow, 2 mi. to the SW.

Named "Deutsch Hollow" after the German settlers and its hollow valley. First settled by Charles Paffrath in 1834 who owned a tavern on the busy highway, later a stop of the stagecoach line. Today there are the remains of "Stovall's Grove roadhouse" and a dance hall. And the original Route 66 alignment on Stovall Rd. itself.

Only 0.2 miles long, this is the Map of 1926-32 alignment, the Map above shows this segment in Pale Blue. Later, the road shifted north slightly to straighten the highway.

Head west, and 1.2 mi. ahead is another abandoned section of Route 66:

Short stretch, to your left. This is the Map of 1926-32 alignment, later shifted north to straighten the highway.

It runs along Old Manchester Road and Deer Creek Rd. and was cut off when the road was straightened out between this point and Locust lane. The Map above shows this segment in Pale Blue and the now gone roadbed in Black.

Here the original road as Old Manchester Road curves widely to your right leaving MO-100, arching out of St. Louis County and entering Frankling County. At Fox Creek bridge, just west of Basset Rd. and Manchester Rd. is a bridge, built in 1923, it is Bridge #364 and dates back to the time when the road was first paved. This is its Street View.

The arch turns back southwards and meets the later MO-100 alignment at Locust Lane. There is another "abandoned segment" here:

It is a 500 foot-long extant part of the semicircle that once stood hera, along Locust Ln. Map of 1926-32 alignment, the later alignment cut across the "diameter" of this circle, bypassing it. The Map above shows this segment in Pale Blue and the now gone roadbed in Black.

Head west to the 1932 - 1977 Route 66 alignment in Gray Summit or south to Eureka. Head east to visit St. Louis or take a left north along the former "Bypass 66" at Kirkwood.

Book your
lodging nearby:

From Wildwood to Gray Summit

We describe the full itinerar above, it is a 15.4 mile journey and this is its Map with directions.

US highway 66's original alignment from 1926 to 1932 ran through what is now Wildwood with an east-west course from St. Louis, through Kirkwood along Manchester Rd. and therefore avoided having to cross the Meramec River between St. Louis and Villa Ridge. It is shown in Orange in the Map above; linking St. Louis & Maplewood in the east with Gray Summit in the west.

In 1932 a shorter and straighter alignment was built routing the highway along Watson Rd. This paved highway required two bridges to cross the Meramec, one at Sylvan Beach, to the west of Wildwood and another at Times Beach. As you can see in the map above this road is now partly overlaid by I-44 west Sunset Hills (shown in Red). West of Gray Summit, the original road was maintained from 1926 to 1977 and is shown in Pale Blue.

There were many Route 66 alignments in St. Louis itself, including the Bypass US 66, that went around the city along its north and western sides and met the City 66 just four miles west of Wildwood, in Sunset Hills. This alignment is shown in Brown in the map above (click on "St. Louis US 66" button first).

The former Route 66 became Missouri highway MO-100 and it was improved over the following decades. These improvements straightened the old US 66 out and cut off some former sections of Route 66 roadbed: Old Roadbed (1), Old Roadbed (2), Old Roadbed (3) and Old Roadbed (4), all of them described above.