Allenton had only one Route 66 attraction, the Bus Stop Shelter which was part of the 1930s Henry Shaw Gardenway, now you can see its site, but the actual bus shelter building is preserved in neighboring Gray Summit's Shaw Nature Reserve.

The Main Alignment of Route 66 near Allenton

Allenton is a town located on the western edge of St. Louis County, on the 1932-1977 alignment of Route 66 in the central-eastern Missouri. (Map of Allenton).

For a general history of the area (St. Louis County) visit our page on neighboring Eureka.

The town was platted on the Missouri Pacific Railroad in 1852 and has always been a small rural community with farms, growing in the shadow of larger Eureka to the east and Pacific to the west.

Named after Thomas R. Allen, the president of the Missouri-Allenton Railroad or MoPac which was one of the first railroads in the United States west of the Mississippi River, laying its first tracks in 1851 and reaching Kansas City in 1865. Its original goal was to reach the Pacific Ocean, hence its name. Allen is a Celtic name which may mean "little Rock" or "harmony" (Ailin) or "handsome" (Aluinn).

The new alignment for Route 66 was built through Allenton in 1932, a paved highway that linked it with St. Louis in the East and Villa Ridge in the West. Nevertheless, the town was south of the highway and it offered no services to those driving along it. Now the old highway is Business Loop 44 and it meets the Interstate at Allenton. The county declared the town of Allenton as blighted in 1973. Blighting is a legal power that allows municipalities to condemn properties and even whole neighborhoods resulting in their use for other purposes (usually, some highway or important project, mostly however for private commercial developments). The town was annexed by neighboring Eureka in 1985 which later extended the blight via an Emanate Domain which allowed a private real estate investment company to purchase it. Little remains today of the old town.

Where to Lodge in Allenton, Missouri

Accommodation and hotels near Allenton

> > Book your accommodation in neighboring Eureka

More Lodging near Allenton along Route 66

>> Check out the nearby RV campground in neighboring Pacific

Allenton has four clearly defined seasons and is located in the area where humid continental climate shifts towards a humid subtropical climate, so summers are hot and humid while winters are cold. It gets cold Arctic air and hot damp tropical air from the Gulf of Mexico. Spring is wet and may have extreme weather (tornados, thunderstorms and even winter storms). Fall is sunny and less humid, with mild weather.

Allenton is located in Missouri's "Tornado Alley" and St. Louis County is struck by some 7 tornados every year.

You can reach Allenton along historic Route 66 or along MO-100, and also via Interstate I-44 that links it with Pacific, St. Clair, Rolla and Springfield to the west and with Eureka and St. Louis in the east. US 63 runs through Rolla to the west and US 50 passes just to the north of the town (with I-44). I-55, I-70 and I-64 go through St. Louis too.

Map of Route 66 through Allenton, Missouri

Route 66's alignment in Missouri: the Historic Route 66 through Allenton

Allenton and its Route 66 attractions

Allenton had one Route 66 attraction, the Bus Stop Shelter part of the 1930s Henry Shaw Gardenway, now you can see its site, but it is in neighboring Gray Summit's Shaw Nature Reserve.

The WPA travel guide "Missouri, a guide to the "Show Me" state" published in 1941 does not mention it, and Jack DeVere Rittenhouse in his "A Guide Book to Highway 66" published in 1946 wrote a small note aout it: "Allenton (Pop. 301) ... is a small community across the railroad tracks (L[eft]). It offers no tourist facilities on US 66".

The only sight was a Bus shelter:

Formerly at Allenton Rd. and Route 66 - now in the Shaw Nature Reserve 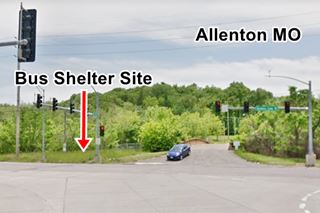 Site of the old Bus Shelter in Allenton Mo, A. Whittall
Click on image for Street View.

This small stone building was built in 1939 by the Civilian Conservation Corps during the Great Depression, and was designed by the National Parks Service. It stood in Allenton until 2002 when it was moved to Shaw Nature Reserve in Gray Summit., on the Trail House Loop Road.

The shelter is pictured above at the top of this page.

A metal fixture which had a cutout of some children and a dog had been removed in 1984 to preserve it from vandalism.

It stood on the southeast corner of Allenton Rd. and Route 66, by the bridge over the railroad tracks as you can see in the image.

Part of the Missouri Botanical Garden, it encompasses 2,400 acres of the natural Ozark Border landscape including about 1.5 mi. of river frontage along the Meramec River. It was created in 1925 when the Botanical Garden set aside an area free of smog and smoke to protect its plant collection from pollution in St. Louis. It was named after the founder of the Botanical Gardens, Henry Shaw. Now it is an outdoor recreation area and natural reserve. Learn more at their website.

As part of a beautification program during the Great Depression, a portion of the newly aligned Route 66 between St. Louis city limits and the arboretum in Gray Summit (now Shaw Nature Reserve) was dedicated as the Henry Shaw Gardenway It was planted in native flowers and shrubs, with dogwood trees blended into the natural forest of oak, pine and hickory. It included picnic areas, paths, patios and other buildings, but only two structures remain: The recently restored Jensen Point overlook in Pacific and this Allenton bus stop shelter which was moved to the Shaw Reserve, 1 mi. from the visitor center (location map).

Head west to visit neighboring Pacific to the west or head east into Eureka or drive (west and then east) along the old 1926-32 Route 66 into Saint Louis through Gray Summit.

Book your
Hotels in neigboring:

Wild animals opened the first trail through the woods along the Meramec hills, and then headed towards the southwest into the Ozark highlands thousands of years ago. Later they were used by Illinois and Osage Natives and by the French, Spanish and English explorers. During the 1850s there were cart trails linking St. Louis with Springfield, like the one crossing the Meramec River on a wood bridge. The state higway from St. Louis to Jefferson City ran along what is now MO-100 just north of Allenton and then west along what is now US-50.

With automobiles becoming popular in the 1910s, roads had to be improved, they were suitable for carts, but not for cars. The State of Missouri improved those roads and created State Higways (#14 and#100), building bridges and improving them by paving them or placing gravel on the roadbed. Route 66 was aligned along both of these highways in 1926, and was paved between St. Louis and Gray Summit -just west of Allenton- and was being paved west of Gray Summit, towards St. Clair and Stanton.

From Allenton to Pacific

A short 4.5 mile drive along Route 66, this is its Map with Directions, just head west along BL-44 it curves south, then southwest and leads you into town.

As you can see in the Map above, we have colored the different segments of the old alignment as follows: the original alignment from 1926 to 1932 from St. Louis to Gray Summit runs north of Allenton, and is shown in Orange. The original 1926 - 1950s alignment west of Allenton and the 1932 to 1950s alignment east of the town are shown in Pale Blue. Red shows where you must drive on the Interstate as the old segments are cut by it. Blue shows the original parts of Route 66's 1932-77 roadbed that can still be driven but are not located on the Pale Blue road, they end in dead ends and the Black segments show the orginal but now gone parts of the old road.

1933 Map of Route 66 from Villa Ridge to St. Louis, Missouri, notice that US 50 runs along the former 1926-32 US 66 alignment which is now MO-100 and Route 66 runs along its present course, through Allenton which is not shown (neighboring Eureka does appear in the lower left part of the map). 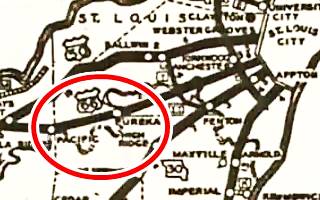 By the early 1940s Route 66 was congested and the heavy traffic made it unsafe. Rittenhouse mentions in 1946: "From here (Gray Summit) into St. Louis, US 66 has three or more lanes.". In the early 1950 most of the original road was bypassed by a new four-lane divided dual carriageway highway which replaced the old US 66. The 1954 USGS map shows it has having a "4 Lane" road carrying both US 66 and US 50 west from Pacific into Allenton which had no buildings on US 66, and then a "3 Lane" alignment eastwards up to Eureka, where it becomes four lanes again. In the late 1950s US 66 was also numbered as I-44.

The old four lane US-66 ⁄ I-44 Freeway was improved again in Missouri after 1965, and the old US 66 was upgraded to Interstate standards as attested by the USGS 1963 Map revised in 1969, the four lane divided I-44 carried US-66 and US-50 and bypassed the original road in Allenton which became current BL-44. By 1972 the whole of Route 66 had been replaced by the Interstate system. In 1974 it was decided that US Hwy 66 between Joplin and Chicago be eliminated, but his was delayed until I-55 in Illinois was completely brought up to Interstate standards. In 1977 the US 66 shields and signs were removed.

> > See the next segment Pacific to Gray Summit (west)