Farmersville is a small village next to Route 66 in Illinois. Its main attraction is the classic Art’s Motel and Restaurant and gas station.

The Main Alignment of Route 66 (after 1940) at Farmersville

All about Farmersville, Illinois

Farmersville is a tiny village next to Route 66, in Montgomery County, Illinois. (Map of Farmersville).

This area was first settled some 12,000 years ago at the end of the last Ice Age. Later Illinois indians lived in the area, at the time when the first European explorers reached the area. These were French in the late 1600s.

The first pioneers reached what is now Montgomery County around 1800 and Montgomery County was created in 1821 and named for General Richard Montgomery, an American Revolutionary War hero, killed in 1775 during a failed attempt to capture Quebec, Canada.

The Bois d'Arc township was created on 970 acres of land, entered by Lewis Thomas in 1851. Farmersville was founded in this township in 1893 when the Illinois Central Railroad buitl its line through the area.

Named for the community of farmers who lived off the very fertile soil of the area.

Many Irish settled in this region, and became a strong influence in the village's character. There is a local festival, the Irish Days which takes place on the second weekend of June from Thursday to Saturday.

Farmersville, its Hotels and Motels

> > Book your hotel close by, in Litchfield

More Accommodation near Farmersville on Route 66

>> Check out the RV campground nearby, in Lichtfield and Raymond

Summers in Farmersville are humid, warm and long while winters are short and freezing as well as windy.

Farmersville is in an area struck by some 7 tornados each year.

Map of Route 66 through Farmersville in Illinois

Below we provide More information on US 66 in the neighborhood of Farmersville where it is a Historic Site.

Reach Farmersville driving along Historic U.S. 66 or take the freeway, I-55 an use Exit 72.

Jack de Vere Rittenhouse mentions the village in his 1946 classic (Guidebook of US 66) as follows: "US 66 barely touches the eastern edge of the town" which had "gas, cafes, Cundiff garage". He also mentioned a Gas Station one mile north of the town (now gone -Studebaker Ave.) and four miles north of Farmersville was a junction leading to Virden, here was "another gas station, cafe and 8 cabins" (current Virden Ave., also gone).

The Roundup Cafe and Motel with 13 units was located north of Farmersville on 3300 Co Rd. North. It was owned by the McGaughey Brothers who, in 1963 bought the Lauterbach Tire Man for their motel.

Erected in 1962, the Tire Man was first displayed as advertising in the tire business owned by Russ Lewis on State and Laurel in Springfield Illinois. He sold it shortly after.

The Roundup had it until they closed in 1978 when I-55 was completed and their business lost customers; the Lauterbach giant still survives (having changed the tire for an American flag, and you can see it on Wabash street in Springfield).

There was a cafe and gas station here, run by the Hendrick's brothers. Art McAnarney leased it from them in 1937 and added cabins to it.

His "Art’s Motel and Restaurant" was successful (even though it suffered a fire in 1952 that burned the second floor of the cafe -which he rebuilt as a one-floor building.)

The postcard below (although it has some 1950s cars in it) reads: "One Stop Service. MOTEL - New in 1960. Ultra-modern with individually controlled Electric Heat. Free TV. RESTAURANT - Art's Fine Foods under the same management for 25 years. SERVICE STATION - Conoco Gas and Oils. On U.S. 66 - Twenty Mi. South of Springfield at Farmersville, Illinois Phone 7-2371 Elmer and Joe McAnarney Owners."

Postcard of Art’s Motel and Restaurant in Farmersville, Illinois

This is a "Now" view of the same buildings; the small "Conoco" sign is gone. The restored motel sign is to the right, beneath the large signpost:

Present view of the old Art’s motel and restaurant in Farmersville, Illinois

After Art's death in 1957 his sons kept the business going, they added an "L" shaped motel in 1960. It survived the opening on I-55 because the Exit for Farmersville was located next to it (saving it from the fate of the Roundup cafe). 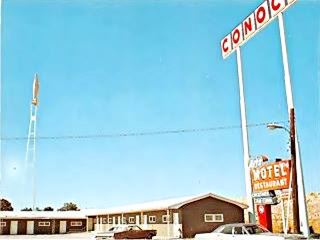 The vintage 1960s postcard shows that Art's added a tall sign for the freeway traffic that also advertised their "Conoco" gas station.

The Motel's neon sign was restored by volunteers of the Illinois Route 66 Association in 2007.

The original 1926 to 1930 alignment of Route 66 followed State Higway No. 4 and ran to the west of Farmersville from Staunton to Springfield.

In 1930 the road was moved to the east, and made shorter and straighter by the Illinois Division of Highways. This highway passed by Farmersville and is shown in Blue in the map.

The 1930s and the later 1940 Route 66 is now under the W Frontage Road, but just south of town, on the south side of Macoupin Creek, just to the west of the southbound lanes, a stretch of abandoned Route 66 alignment with a Dead End sign (Blue arrow):

Original roadbed of US 66 in Farmersville, Illinois

Its bridge over the creek is gone, but north of the stream, it continues as Witt St. which runs parallel to the Frontage Road and also ends in a Dead End next to Exit 72. This is the original 1930-40 roadbed and is also marked in Blue in the map above. 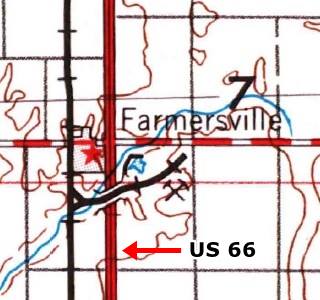 As the heavy traffic of trucks during WW II damaged the pavement, the government began building a four-lane highway. You can see it in the small USGS map from 1958 where the "Four Lane - Dual" highway passes to the right of the town. It didn't have exits like the modern freeway had, only right angled junctions and crossings. By 1958 the four lane alignment carried I-55 and US 66.

The map shows a railroad spur south of town to a mine on the eastern side of Route 66. It has been lifted and the overpass removed.

This is the map of Route 66 between Farmersville and Waggoner (4.7 miles along the West Frontage Road).

> > See the next segment Waggoner to Litchfield (west)