Mt. Olive, is a town that is set on both the 1930-40 and the 1940-1977 alignments of Route 66.
It has two historical sites: the iconic Soulsby’s Shell Service Station and "Mother" Jones Monument and Union Miners Cemetery. There is also a Former Gas Station on US 66.

The Illinoisians were displaced by the arrival of more settlers occupied.

Macoupin County was established in 1829 and was named after Macoupin Creek (the word is a Miami-Illinois term for the American lotus: Nelumbo lutea).

John C. Nieman a Prussian, migrated to the U.S. in 1839 and settled in Macoupin County in 1841, he worked as a farmhand and managed to establish his own farm.

He opened a store in what became known as "Nieman's Settlement" which became the seed of a small hamlet. He was its first postmaster. The town was platted in 1859.

Nieman named it "Oelberg" or "Olive mountain", translated as Mount Olive, after the Mount of Olives in Israel.

He established the Mount Olive Coal Co. in 1874 which by 1879 employed almost 150 miners. This impacted positively on the economy.

Accommodation and hotels in Mt. Olive

> > Book your accommodation nearby, in Litchfield

More motels and Hotels close to Mt. Olive and Route 66

Book your Hotel in neighboring Litchfield

>> Check out the RV campground in neighboring Litchfield

The Weather in Mt. Olive

Mt. Olive may be hit by some 7 tornados every year.

Check out Mount Olive on our Illinois Route 66 Map, with the complete alignment and all the towns along it.

Map with the alignment of Route 66 through Mount Olive

Here is More information on US 66 as it goes through the town of Mt. Olive.

Reaching the town of Mt. Olive

Landmarks and Places to See in town

In his book, published in 1946 (US Highway 66 Guidebook) Jack Rittenhouse tells us about his journey around the town using the 1940 Route 66 alignment:

He mentions a gas station at the fork between the 1930-40 alignment and the 1940-1977 one, where Max Mullins Salvage is now located (the cafe and gas station was known as "Mill"). One mile west, on the junction with N Poplar St. (then a "graveled road", nowadays a grassy track) he tells us that there were a "few roadside tables at this intersection" and just ahead he reminds us, was the road to the Cementery where 'Mother Jones' was buried.

The town in those days had 2,559 residents (more than now) and had a "garage; gas; small hotel". As most of those in the area it was a farming and coal mining town.

On the south side of town, where both old and new alignments met, he reported "Here there is a side road off (Right) at a tangent, leading to Litchfield. At the Intersection is the 66 Tourist Camp with cabins, gas, etc." This means that he entered town and then left it along the 1930-40 road because the other was on his right at the junction.

Drive into town from the east along the 1930-40 alignment that forks to your left on the eastern side of the city. It curves slowly into town and runs through its built up area. Just before it turns sharply to the south, to your right is a road that leads to a historic site:

The cemetery and burial of "Mother" Jones, which is located between both US 66 alignments on the NW side of town:

700 North Lake Street. See this Map showing how to reach the monument from both alignments.

As the miners killed during the Virden Mine Riot were denied burial in the area's cemeteries the local miner union bought a plot of land to bury them there (1899). The cemetery became the Union Miner's Cemetery and expanded.

She was an Irish-born American (1837-1930) who from humble origins and having worked as dressmaker and teacher became an organized labor activist and representative.

Cofounder of the Industrial Workers of the World she worked with the Knights of Labor and the United Mine Workers union.

She organized miners against exploitation and was feared by the Mine industry tycoons.

She is buried in the Union Miners Cemetery in Mount Olive,next to the miners who died in the 1898 "Battle of Virden", who she called "her boys".

The monument that crowns her tomb in pink Minnesota granite with two bronze miners flanking it was dedicated on October 11, 1936, now celebrated in Mt. Olive as "Nother Jones's Day".

Head south (westbound) and two blocks past Main Street (IL-138) to your right is a Historic Icon, the Soulsby's Shell Service Station:

Henry Soulsby and his son Russell built the Shell gas station in 1926, even though at that time U.S. 66 ran much further to the west. They expanded it in 1930 when U.S. 66 was realigned right in front of their business.

Russell ran the place with his sister Ola after the death of their father. They closed in 1991. It has been rescued and preserved by a local non-profit organization. 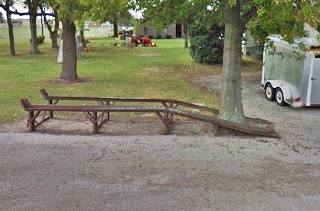 Don't miss the steel ramp to the south of the building, which was used for oil changes and repairs. A tree grows through it now.

Go back to Main Street and turn east into the town, it has plenty of red-brick buildings from the early 1900s in good shape. For those interested in history, you can visit the museum:

It is a brand new museum that is dedicated to transmit the story and efforts of "Mother" Jones.

You can still see the concrete island but it has no gas pumps. The old building has been very modified building, and you can see its 3 door garage.

Drive west until the junction of this 1930-1940 alignment and the other 1940-1977 alignment on the south (east) side of town. Here is where Rittenhouse mentioned a "tourist camp" with cabins and gas, it has now vanished.

Below is the view of the junction. The Pale Blue arrows mark the Historic Route 66 alignment (1940-77) and the Blue arrow is the 1930-1940 alignment. The gray arrow on the right marks the modern highway. The original roadbed lies to the east of it, and is blocked off; grass grows between the cracks in the concrete. The Red circle marks the two official road signs that mark both alignments. Look for these brown signs on your journey, you won't get lost.

Fork of both US 66 alignments south of Mt. Olive, Illinois

This is the end of your trip. You can return to your starting point by turning right and driving back along the 1940-1977 US 66. At its junction with IL-138 is this motel:

The first alignment of Route 66 followed State Higway No. 4 from Hamel, eastbound. It turned to the north at present Exit 33 of I-55, where the access to Worden is located. And continued northwards into Stanton and from there along IL-4 onwards past Sawyerville and into Bendl. It ran well to the west of Mt. Olive.

The alignment is marked in Orange in the map above.

In an attempt to make the road shorter, in 1930, the Illinois Division of Highways chaired by Thomas Sheets moved Route 66 eastwards. It ran from Farmersville, Litchfield, and Mt. Olive.

After Mt. Olive it met the previous alignment just south of Stanton.

It is shown in Blue in the map.

This is a map with directions of this segment through Mt. Olive.

This alignment is now buried beneath the freeway east of Exit 33 on I-55. It resurfaces on the eastern side of Livingston but only appears with its original surface at Exit 41, where it heads north, to bypass the town of Mt. Olive along its western and northern sides. You can see the original roadbed on the eastern side of the modern highway, overgrown concrete, with cracks.

This is a map with directions of this segment around Mt. Olive.

> > See the next segment In Livingston (west)