Manuelito is a tiny village on the on the Historic Route 66 alignment (a Historic Landmark) located in a narrow valley enclosed by red sandstone cliffs.

Manuelito is a small village in McKinley county, 17 miles west of Gallup and only 9 miles from the Arizona State Line. See a Map of Manuelito.

Rio Puerco of the West and beyond it, the sandstone cliffs and Route 66, in Manuelito, NM. Route 66

This part of New Mexico bordering Arizona has been populated for the last ten thousand years. More recently the Anasazi, ancestors of the Pueblo Indians lived in the area (until ca. 1300 AD) then moved south and east leaving the territory to the Navajo People.

The expedition led by Francisco Vásquez de Coronado reached the nearby Zuni Pueblo in 1540 and explored New Mexico (and Arizona, reaching the Grand Canyon) and the Great Plains. The Spanish would return in 1597 to occupy the Rio Grande River area, and subdue the Pueblo farmers. But they did not dare enter the land of the fierce Navajo people.

Mexico became independent from Spain in 1821 and took over New Mexico, loosing it to the US after the Mexican American War of 1846-48. During this period, the Navajo raided the villages to the south and east.

The U.S. Army established Fort Defiance in what is now Arizona, north of Manuelito in 1851, in the heart of the Navajo territory. Attacked several times, it was abandoned during the American Civil War (1861), and the campaign against the Navajo was conducted from the ("Old Fort Wingate" near what is now Grants.

The Navajo were subdued by an attrition war and the starving natives were forced to march to a reservation near Fort Sumner NM ("The Long Walk"). Their calamitous situation led to a public outcry. The Army commander, Brig. Gen. James Carleton was displaced and the Navajo people allowed to return to their homeland, which became the Navajo Nation Reservation in AZ and NM (1870).

Fort Wingate was moved closer to the Reservation (to Wingate, to the east of Manuelito) and Fort Defiance was reestablished.

Now Fort it is a village in the Navajo Nation in Arizona. (Map with Fort Defiance's location).

The military road that linked both forts passed through Gallup. This route was surveyed by the The Atlantic & Pacific Railroad (later the Atchison Topeka and Santa Fe RR) for their railway across the Continental Divide to the Pacific. 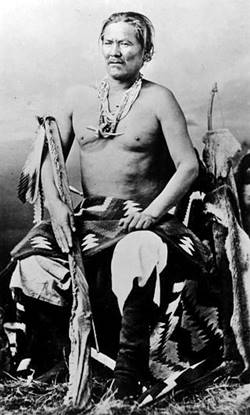 A portrait of Manuelito, Public Domain

The station was named after the a Navajo Chief, Manuelito.

Chief Manuelito (1818 - 1893) was one of the most important Navajo leaders, and he was a brilliant warrior.

He had several Diné (Navajo) names as was the custom among them: Ashkii Diyinii (Holy Boy), Dahaana Baadaané (Son in Law of Late Texan), Nabááh Jilt'aa (War Chief) among others. The New Mexicans called him "Manuelito" which is the diminutive form of "Manuel", a Spanish name and it literally means "Little Manuel".

Manuel derives from the Hebrew name Immanu'el "The God among us".

He was a member of the Bit'aa'nii clan and was born in SE Utah. He resisted the advances of the U.S. Army in the 1850s and 60s, but ended up with his people in the Bosque Redondo camp near Ft. Sumner.

He signed the 1868 treaty that ended their confinment in Bosque Redondo and allowed them to return to their homeland, in a Navajo Reservation.

The first settlement here was on the south side of the Western Rio Puerco River: "Cooks Ranch" which was a stage stop on the Star Rail route through Holbrook Arizona to Ft. Whipple. The railroad reached Gallup in 1882 and pushed westwards reaching Manuelito shortly after. The railway's station was named Ferry Station, but by 1895 it was named Manuelito.

The station replaced Defiance as the supply point for Fort Defiance, and Manuelito Canyon that has a NW course from the station was the route that linked it to Fort Defiance.

The Navajo name for the village was "ugly house" or "abandoned house". It refers to a nearby Anasazi ruin.

In 1926 Route 66 was aligned through the area following NM state highway 6 which in turn ran next to the railway. Manuelito appeared in the Rand McNally 1927 map of Route 66, as being 9 miles west of Defiance and 6 miles east of Lupton, Arizona on an unpaved but improved highway.

Route 66 was later replaced by I-40 in the 1960s, bypassing Manuelito on the south side of the Western Rio Puerco River.

There is lodging along Route 66 very close to Manuelito:

Lodging Near Manuelito along Route 66

Book a room in neighboring Gallup:

>> There are RV campgrounds near Manuelito, in Gallup and in Holbrook AZ.

The weather in Manuelito

There is virtually no tornado risk in Manuelito: McKinley County has no Tornado watches. The area west of this point has no tornado events at all.

The dry climate and high elevation of Manuelito make its winters cold and summers hot. Nevertheless, the dry air and high altitude provide relief in summer: nights are cool, but in winter it makes the nights even colder. Day-to-night temperature swings are quite ample throughout the year.

Snow is quite heavy and averages around 30.4 inches (77.2 cm) per year which can fall at any time between Oct. and May, but usually between November and March.

This map shows the alignment of Route 66 in Manuelito. The color key for this town is:
Pale Blue: Historic Route 66 alignment.
Red line: I-40 & where it overlaps the old alignment.
Green: The 1926 - 1937 alignment through Santa Fe (click button to see it).

Going north from Albuquerque on the old "Santa Fe loop of Route 66" is Santa Fe (216 mi.), Glorieta, Pecos and Romeroville.

On the main alignment of Route 66 to the east of Albuquerque are: Santa Rosa, Tucumcari (328 miles) and, on the Texas state line: Glenrio (369 miles).

A small Village among Sandstone Buttes

Manuelito a very small village on a Historical segment of Route 66 along the Rio Puerco of the West River in NM.

Head west and visit Arizona (Lupton, Chambers and Holbrook) or head east to Gallup (17 mi.). There is plenty to see in the area.

A drive along Route 66 west of Manuelito is a lovely experience. The road was built right beside the sheer sandstone cliffs that close in on the Rio Puerco of the West River. It runs parallel to the railroad, on the north side of the river. See below (Route 66 near Manuelito) for a full description of Route 66 in Manuelito.

Historic Marker on I-40

NM Welcome Area on eastbound lanes of I-40. It is located Here.

The Marker has the following text:

"Manuelito Area. This area contained many Indian pueblos dating from about A.D. 500 to 1325, when it was abandoned. Navajos settled here by 1800. This was the home of Manuelito, one of the last of the chiefs to surrender for confinement at the Bosque Redondo Reservation near Fort Sumner. The Navajos returned here in 1868."

The Alignment of Old Route 66 near Manuelito

Route 66 Near Manuelito: From Gallup to the Arizona State Line

Book your
Hotel in Gallup
17 miles to the east.

Route 66 passed right through Manuelito since it was created in 1926 and it remained so until it was replaced by I-40 in the late 1960s.

The map of the Gallup to Manuelito segment shows the alignment of US 66 all the way to its dead end right next to I-40 west of Manuelito. The road used to carry on, but is now cut off by Interstate 40. Its old alignment continues on the south side of I-40, which you can access by backtracking to NM-32 and following it and NM-118 first south under I-40 and then west as its South Frontage Road (NM-118). Continue along the road until I-40's Exit 8, where you will cross to the north side of the Interstate (Map from Manuelito to Exit 8 of I-40 and reach the "Historic Segment":

Historic Route 66 from from Manuelito to the Arizona State Line

The road was built as part of the National Old Trails Highway which became New Mexico state highway 6 in 1914. In 1926 it was incorporated into the alignment of U.S. Highway 66.

The road west of Manuelito follows the Western Rio Puerco River's Valley, along the north side of the River. It is a valley which narrows at times and is enclosed by sheer sandstone cliffs that rise from the valley floor.

Juniper and pinyon trees grow on the mesas and the railroad runs next to the highway. This was a difficult stretch due to the unstable terrain at the roadcuts which washed away or were covered by rockslides.

The road was paved in 1930 and has great vistas of the "Devil's cliff". New steel mesh fencing protects the road from rockslides.

Once there was a U.S. Highway bearing the number 666 but on May 31, 2003, the American Association of State Highway and Transportation Officials approved a new number for it: the route became U.S. 491, a spur of U.S. 191.

Route 66 and U.S. 666 shared the roadbed between Gallup and Sanders in Arizona (where US 666 headed south all the way to Douglas on the Mexican border).

It was an unsafe highway and things were made worse by those D.U.I. But state officials thought that the cause was supernatural and voted to have the number changed for the following reasons:

WHEREAS, people living near the road already live under the cloud of opprobrium created by having a road that many believe is cursed running near their homes and through their homeland; and
WHEREAS, the number "666" carries the stigma of being the mark of the beast, the mark of the devil, which was described in the book of revelations in the Bible; and
WHEREAS, there are people who refuse to travel the road, not because of the issue of safety, but because of the fear that the devil controls events along United States route 666; and
WHEREAS, the economy in the area is greatly depressed when compared with many parts of the United States, and the infamy brought by the inopportune naming of the road will only make development in the area more difficult....

The road is now NM-118 and runs along a narrow valley of the Western Rio Puerco River from Exit 8, 3 mi. east of Manuelito to the AZ-NM state line. See The map from Exit 8 of I-40 through Manuelito to Arizona (Historic Segment).

> > See the next segment Lupton to Allentown In Arizona

Read about the parks nearby, at Grants: Parks in Grants and Park in Bluewater.